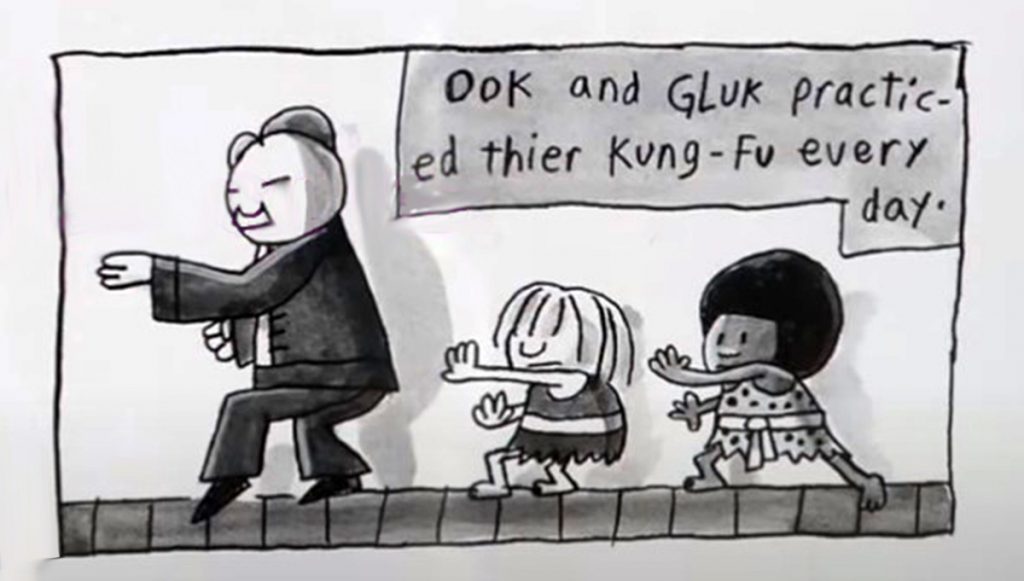 The Scholastic corporation, leading publisher of children’s books and educational material for generations, have announced the halting of future prints and distribution of “The Adventures of Ook and Gluk: Kung-Fu Cavemen from the Future.” The 2010 graphic novel from “Captain Underpants” author Dav Pilkey has been reassessed, and found to show examples of passive racism.

This decision is fully supported by author Dav Pilkey, as you can see in Scholastic’s official press release:

“On Monday, March 22, 2021, with the full support of Dav Pilkey, Scholastic halted distribution of the 2010 book The Adventures of Ook and Gluk. Together, we recognize that this book perpetuates passive racism. We are deeply sorry for this serious mistake. Scholastic has removed the book from our websites, stopped fulfillment of any orders (domestically or abroad), contacted our retail partners to explain why this book is no longer available, and sought a return of all inventory. We will take steps to inform schools and libraries who may still have this title in circulation of our decision to withdraw it from publication.

Throughout our 100 year history, we have learned that trust must be won every day by total vigilance. It is our duty and privilege to publish books with powerful and positive representations of our diverse society, and we will continue to strengthen our review processes as we seek to support all young readers.“

Dav Pikey himself released a similar statement on his YouTube channel, which you can see here. Or, read below:

About ten years ago I created a book about a group of friends who save the world using Kung Fu and the principles found in Chinese philosophy. The Adventures of Ook and Gluk: Kung-Fu Cavemen from the Future was intended to showcase diversity, equality, and non-violent conflict resolution. But this week it was brought to my attention that this book also contains harmful racial stereotypes and passively racist imagery.

I wanted to take this opportunity to publicly apologize for this. It was and is wrong and harmful to my Asian readers, friends, and family, and to all Asian people.

My publisher, Scholastic, Inc., has stepped forward to share my responsibility, and together we are ceasing all further publication of The Adventures of Ook and Gluk, Kung-Fu Cavemen from the Future, and actively working to remove existing copies from retail and library shelves. I hope that you, my readers, will forgive me, and learn from my mistake that even unintentional and passive stereotypes and racism are harmful to everyone. I apologize, and I pledge to do better.

PS. My wife and I pledge to donate all of my advance and royalties from the sale of The Adventures of Ook and Gluk: Kung-Fu Cavemen from the Future to charities that provide free books, art supplies, and theater for children in underserved communities; organizations that promote diversity in children’s books and publishing; and organizations designed to stop violence and hatred against Asians. These non-profit charities include: We Need Diverse Books, The AAPI, and TheaterWorks USA, among others.“

Here are some images from the book. We were able to find a reading of the book on YouTube and take screen captures. We can’t imagine the video will stay up since the book in all forms will no longer be published, but it’s here if you would like to view it.

The chopsticks and kung fu poses are all pretty awfully stereotypical of what someone who thinks to portray an Asian person would assume. Some of the dialogue like “sinse me at peace and stuff” is also screamingly problematic. The depictions of an Asian man doing “Asian things” like holding chopsticks, practicing Kung-Fu, playing with a Yo-Yo (a traditional toy popular in the Edo Era), or Master Wong practicing calligraphy could all be considered passive racism. And oddly enough, are very similar to depictions in Dr. Seuss‘s “To Think I Saw It On Mullberry Street” book which has also been pulled from publication and distribution.

Because of recent events and the #StopAsianHate movement, this comes at an even more sensitive time. It’s important to learn from past mistakes and move forward. Racism is a learned behavior. Passive racism such as the examples shown in “The Adventures of Ook and Gluk: Kung-Fu Cavemen from the Future” can effect how children view the world.