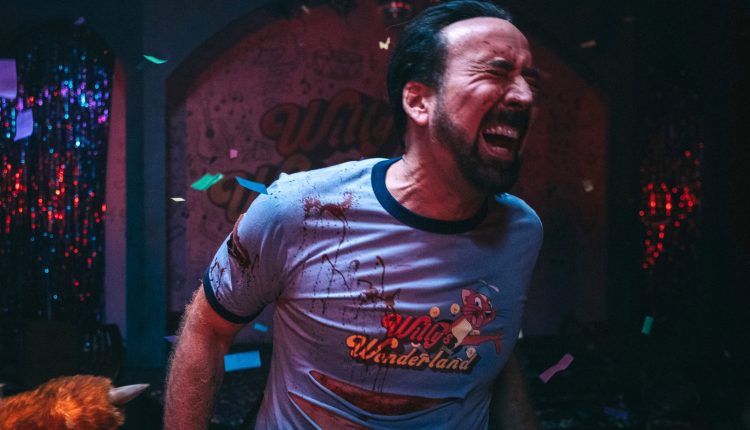 Not as Fun as it Sounds on Paper: “Willy’s Wonderland” [Review]

Let’s get right down to brass tacks with “Willy’s Wonderland.” It asks the question no one really thought needed to be asked until now: How much Cage could Nicolas Cage Cage if Nic Cage could not speak? While that may sound like a spoiler, I’d recommend thinking of it more as preparation.

There’s no pay off for it and it has no baring on the overall narrative itself, so it’s important to let you know that before you embark on this batshit crazy journey, know that Cage doesn’t have a single line in the entire film. “Willy’s Wonderland” is much better on paper than it is in actuality, trading in its foundations of an over the top thrill ride for run of the mill genre tropes.

Make no mistake, “Willy’s Wonderland” primarily delivers on plenty of promises it sets to deliver from its synopsis. It is, for the most part, self aware and never seeks to take itself too seriously. With a premise of possessed animatronics trapped inside a Chucky Cheese like family restaurant with Nicolas Cage, there’s not really any seriousness to be had. There’s not even a need to get too deep into the plot, because that previous sentence is the entirety of it. Sure, there’s lore and some expository information to pad it a little bit, but when you really boil it down, what you read is what you get. Mostly.

See where the film succeeds is also where the film fails. “Willy’s Wonderland” has all the groundwork for a no holds barred, balls to the wall Nic Cage vehicle that only slightly reaches those expectations. This is a bit disappointing considering how low those expectations actually are, and when it does decide to go full throttle, it proves that it is more than capable of doing so. But when the film decides to lean too heavily on the tropes of its own genre is where is starts to unravel. For a film with a premise like “Willy’s Wonderland,” viewers should never start questioning just how absurd it actually is to start questioning why it exists in the first place. We should be able to sit back and bask in the insanity, and “Willy’s Wonderland” pulls back the curtain one too many times to be fully enjoyable throughout.

Let’s start with Nic Cage, who again, does not speak throughout the entire film. Don’t come for me; you’re going to be glad I gave you a heads up rather than spending all of “Willy’s Wonderland” demanding Cage utter just one goddamn word like I did. There’s no rhyme or reason for it, it’s just how it is and no one every justifies or explains it. Luckily for us, Cage doesn’t need words to embody everything we’ve come to expect and love about him. There is something truly admirable about Nic Cage embracing the person we’ve all come to expect him to be. Cage knows why we watch him, and here, even without words, he knows full well that Nic Cage his become more of a moniker than his actually namesake. Goddammit does he own it. Every Punch Energy Drink he pounds down during his pinball breaks in between battling possessed animatronics, Cage is Cage is the truest form of the word and persona. “Willy’s Wonderland” simply wouldn’t work without him.

And therein lies the problem. Anything and everything outside of the Cage vs Monsters standoff is plodding at best. Because Nic Cage is who is, it’s perfectly fine for him to just exist, do what’s expected and let the chips fall where they may. No one else in “Willy’s Wonderland” has that luxury, and the film seems to want to afford it to all of them anyway. The rest of the cast seems to be operating on the idea that they can self aware of their genre typecasts with the tongue firmly paced in their cheek. They all seem to know they’re in a movie like “Willy’s Wonderland,” but don’t fully understand the archetypes aren’t meant to be anything other than that.

They entire cast of slasher horror teens are all accounted for; the badass born and raised town girl hero, the permiscuous girl, the jock, the token black friend jock, the brainy one, and the lovestruck friendzone guy. They’re all here and ready to die for the sake of slasher fodder, but none of them seem to know that that’s what they’re there for. Sure, they fit the bill of their respective characters just fine, but none of them truly embrace it fully, making them expendable in more ways than the premise and script call for. It’s honestly unfortunate, because “Willy’s Wonderland” could be so much better if everyone else was dialed up the 11 the way Cage is and should always be.

In the end, “Willy’s Wonderland” is better on paper than it is in its actualized form. The films inability to really dig in to its ridiculousness leaves it wanting, and ends up drawing too many comparisons to other works like “The Banana Splits” and “Five Nights At Freddys.” Honestly, this is really disappointing, because “Willy’s Wonderland” has all of the foundations to be great. What could’ve been a fully realized, unrelenting thrill ride instead turns out to be a less unique and only slightly more fun version of many, many things you’ve seen before. “Willy’s Wonderland” really should be unlike anything else out there, and the narrative choices it makes inevitably hold it back from being truly unique and great.

At best, “Willy’s Wonderland” is another notch in the Nic Cage Caging out belt, and if for nothing else, worth marking it’s viewing off on your “Cage is in WHAT?!” bingo card. At worst, it’s a film you wouldn’t even know existed without him, barely tipping the scales of the Amazon Prime indie horror genre rabbit hole.

“Willy’s Wonderland” isn’t bad, but it should be great and it just simply is not.

Movie Theaters Are Renting Out Screens to Gamers

8 Ways to Maintain Professional Business Relationships with a Friend