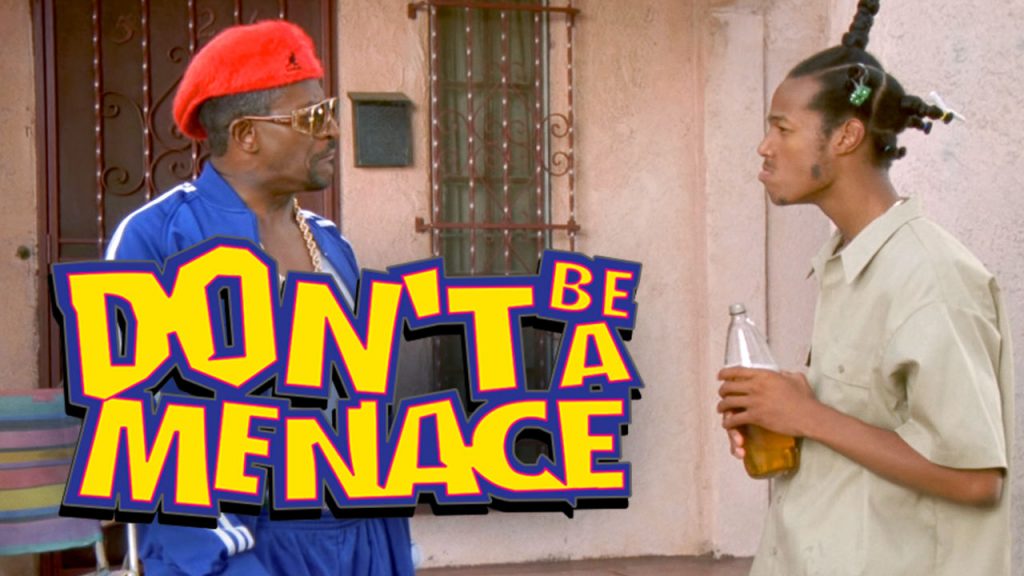 Nerdbot Cinema Reviews: “Don’t Be a Menace to South Central While Drinking Your Juice in the Hood” Turns 25 This Month

Film genre parodies get a bad rap from film critics most of the time. There’s a strong condescending attitude when it comes to reviews films like “Don’t be a Menace,” and it’s not always warranted. To be fair, film genre parodies are typically low brow comedies, acting more as a string of sketches than a fully realized film. They are often jam packed with as many sexual innuendos and childish punchlines that don’t always land as intended.

However, this idea that a genre parody isn’t good because it’s not a Spike Lee critical analysis of social justice is simply absurd and unfair. Yes, there are a sleuth of bad parodies, but there are some damn good ones, too. Not everything needs to be a think piece; sometimes 90 minutes of dick and fart jokes are perfectly fine.

And in that regard, “Don’t be a Menace” certainly delivers.

This is usually where I briefly summarize the plot of the film, but while “Don’t be a Menace” has something that resembles one, it’s not really important when it comes to the film as a whole. The film is meant to be a collective parody of recent hood genre films, leaning heavily on films like “Menace II Society,” “Juice,” and “Boyz in the Hood.”

The films and genre with which “Don’t be a Menace” is making fun of is far more important than what the film is about; the film is about laughter and jokes. That’s it. It never once pretends or tries to be anything other than what it is, thus accomplishing every single thing it sets out to do. That it has an overarching plot is secondary.

Produced by Keenan Ivory Wayans and written by Shawn and Marlon Wayans (who also star), this film is a testament to the often overlooked comedic talents of the Wayans themselves. Look, I’m not going to sit here and tell you I enjoy everything the Wayans touch. Hell, MOST of their filmography and comedic stylings I don’t care for at all. But “Don’t Be a Menace” sets itself a part for me in a lot of ways.

For one, it’s the first feature film collaboration among the three brothers. There is always something to be said about a collaborative first, and I would argue that on that alone “Don’t be a Menace” is their strongest most complete outing when it comes to parody films. Yes, that includes “Scary Movie.” Second, it proves the diversity of their talents, with Shawn fully understanding the absurdity and overabundance of hood films in the years leading up to this movie, and Marlon driving home the slapstick and physical comedy aspect that neither of the other Wayans can do quite as well. And then you have Keenan, who with all speculation as a producer probably gave both the big brother guidance to make the film work as well as it does.

Make no mistake, for all its perfect depictions of hood movies and its well written ability to poke fun at some of the more overdramatic scenes from them, “Don’t Be a Menace” is vulgar, overtly sexual, childish and racially insensitive. While I would strongly argue that all of these things are purposeful and meant to be laughed at but also look inward and evaluate your own racial bias, “Don’t Be a Menace” is unequivocally a collection of dick and fart jokes with a side of racial stereotypes. But then again, why does it have to be anything else? If we already have Spike Lee and John Singleton for the introspective takes, why in the world would we want the Wayans to follow suit?

This where myself and other film critics who gave “Don’t be a Menace” a very low 31% on Rotten Tomatoes differ. Sometimes, it’s ok to not ask too much from a film. Sometimes, even though the source of its subject matter is serious, its parody counterpart doesn’t need to be held to the same standard. Sometimes, a collection of inappropriate jokes about sex, poverty, drugs, violence, police brutality, and racial stereotypes can be funny. “Don’t be a Menace” does just that, and does it well.

It can also be said that while the film as a whole may not be canonized into the AFI 100 Best list, there are countless scenes and quotes that have become iconic and cemented into the cultural lexicon. Things like “Do. We. Have. A. Problem” or “You break, you buy” are recognized by just about everyone, even if they haven’t seen “Don’t be a Menace” in its entirety. That says something about just how good the film actually is within the genre it’s operating on.

By contrast, a much weaker parody of “Not Another Teen Movie” doesn’t have the same cultural survivability. That’s not say it’s a bad parody film (it isn’t), just that “Don’t be a Menace” is perhaps one of the better ones to emerge from the genre as a whole in the last few decades. If for nothing else, it’s certainly makes a strong case for being one the most quoted, and memed parody film on the internet.

That counts for something. For what? I’m not entirely sure. But I refuse to hold the film up to any standard other than its own criteria of parody genre. By that standard, this is about as good as it gets. Of course, films are subjective and if you’re even the slightest bit offended by any spectrum of vulgarity, this probably isn’t the film for you. For myself, I’m all here for it, and have been for as long as film has been around. I also believe that in these crazy times, an outrageous and vulgar comedy that just wants to make you laugh at all the lowest hanging fruit it can is exactly what we need.

The truth is, laughter really is the best medicine, and “Don’t be a Menace” provides a healthy dose. MESSAGE!