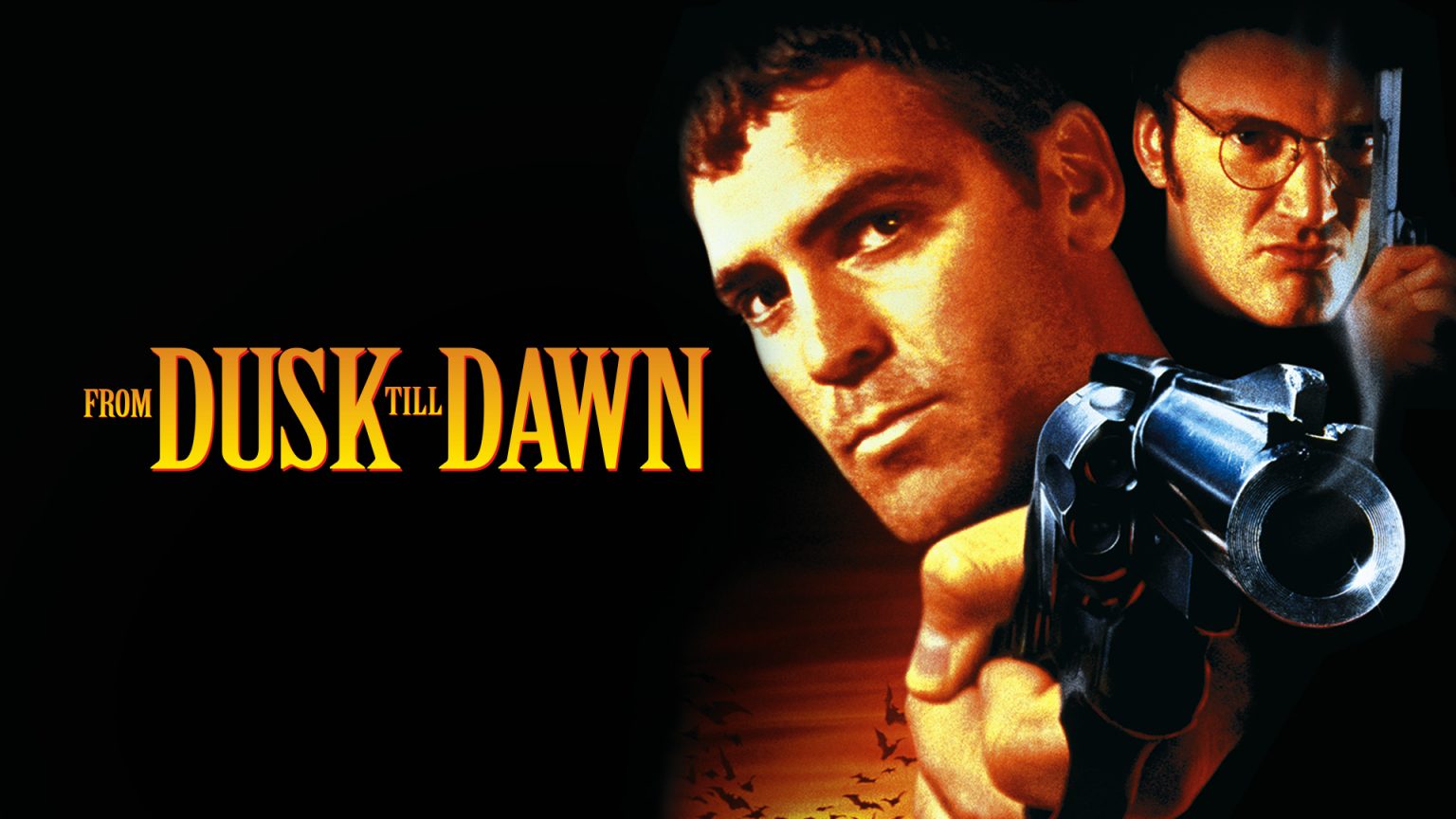 Nerdbot Cinema Reviews: “From Dusk Til Dawn” Turns 25 This Month

January and February are a weird time of year for cinema. It’s typically dumping season for studios; the fire sale of movies that will never qualify for the closed awards season but desperately need to get off their shelf. “From Dusk til Dawn” feels oddly out of place and perfect for this time.

It’s star studded both in front of and behind the camera and has a decent enough premise that seems more fitting for an October release instead of the “let’s just get this over with” release. And yet, “From Dusk til Dawn” is better than should be even if it’s not really as good as it thinks it is. Egregiously violent and darkly nihilistic, “From Dusk til Dawn” is at worst a b horror movie with star power and at best, a solid entry into the cult classic elites.

I’m going to be perfectly clear up top so you’re fully prepared for what kind of review this will be. I absolutely LOVE “From Dusk til Dawn.” In spite of all its problems (and there are a LOT of them) that include bleak themes bordering or complete hopelessness, overly sexualized and unnecessarily vulgar, along with effects that don’t always hold up PLUS some atrocious damn near unwatchable performances, I still LOVE this freakin’ movie.

Maybe it was when I saw it; I was old enough to get the humor and gratuitous sexual overtones but young enough to feel like I was getting away with something for watching it. Or maybe it’s the scene chewing performance of George Clooney who, for lack of a better term, is a perfect anti-hero asshole. It’s not everyday we get to see the “ER” heart throb as a tatted up, foul mouth, hard liquor drinking gun toting, shoot first ask questions later bank robber. Maybe it’s the over the top campy violence, chock full of gruesome effects and creative vampire kills. Or maybe it’s just my unfettered adoration of Selma Hayek. Whatever the case, I know full well that “From Dusk til Dawn” is not a great film and whatever criticisms you have it, they’re all completely justified. I mean, just reading the plot summary, you can pretty quickly identify who’s on board and who isn’t.

Two bank robbers need to cross the border into the Mexico to avoid the law. After a failed attempt at kidnapping a hostage for collateral the come across the Fuller family and their RV and decide it’s the perfect cover. Once in Mexico, they hope to celebrate at a local bar while they wait for their contact to take them to safety. Everything is going great; that is until the bar is discovered to be a temple of vampires who lure truckers to feed on them. Trapped inside, they are forced to work together for survival, they all must do whatever it takes to make it til dawn.

If you read that and thought to yourself, “Wait, Vampires? Where the hell did that come from?” you’d be right. They don’t show up until a good 45 minutes into the movie, and seeing as how it was written by Quentin Tarantino, that left field change for the bizarre should come as no surprise. It was also directed by Robert Rodriguez, which you can tell from the visual effects and cinematography. It’s a strange brew of filmmakers, and “From Dusk til Dawn” feels like they made two different movies and slammed them together somewhere in the middle. Tarantino made his classic dialogue heavy crime drama and Rodriguez came in with a giant bat of grindhouse horror. And yet, as jarring as it is, it all somehow works.

Though tonally different from scene to scene, it has enough of both filmmakers’ signatures to easily ignore it. Seth Gecko (Clooney) is definitely a contributing factor to being able to overlook the glaring tonal shifts, as his performance is easily the strongest of the bunch. Yes, that includes Cheech Marin playing 3 different characters and Harvey Kietel as the everyman father in a crisis of faith.

That’s not say everyone isn’t having fun, because they certainly are. But not everyone is pulling their weight either, with the veterans forced to pick the slack. Yes, this is about you, Richie Gecko (Tarantino). As a writer and director, Tarantino ranks in my top 5 of all time. As an actor, well, let’s just say he’s VERY low on the list. He certainly doesn’t do any favors for himself here, struggling constantly to keep up with Clooney who is firing on all cylinders. I guess the only redeeming things about his performance is it’s one of the very few where he hasn’t written himself casually using racial slurs for absolutely NO reason whatsoever.

And then there’s Scot Fuller played by newcomer Ernest Liu. I can only assume that he’s a nephew of one of the producers who refused to fund the project unless he could be in a supporting role and would not settle for an extra. Considering how good MOST of the rest of the cast is and that it’s comprised of many of both of filmmaker’s recurring favorites, it makes his casting is all the more mind boggling. I get that this is a movie where Cheech Marin repeatedly shouting discounts on (censored) like an OnlyFans fire sale and a random bar patron referred to as Sex Machine (SFX legend Tom Salvini) with a gun that functions as an inexplicably operable replacement for his, um…manhood?

So ya, “From Dusk til Dawn” is strange and grotesque at the best of times. It is unnecessarily sexual (yes, even for vampires), unapologetically violent, outlandishly crude, and tonally imbalanced. And yet, if you’re into any of that, this film manages to STILL be a lot of fun. Yes, it’s bleak and hopeless.

Hell, the movie literally ends with Kate (Juliette Lewis) standing in the middle of nowhere after watching her whole family be murdered by vampires and the only other survivor, Seth, throwing her a stack of money and taking off to his original destination. But there’s something extremely self aware about it all.

You can try to be as deep and as morally gray as you want, but we know you don’t really mean it when you have a band of vampires using recently ripped apart body parts for instruments. It’s all pretty tongue in cheek even when it’s trying to pretend that it’s not.

Honestly, having written this now I’m forced to reckon with just how batshit crazy “From Dusk til Dawn” actually is. We didn’t even talk about Richie’s weird sexual deviant tendency, Tarantino managing to film feet even though he didn’t direct it, the incredible theme song “Dark Night” by The Blasters, and perhaps the most iconic scene in the whole film: Selma Hayek sexy dance with a giant snake around her neck. That’s a LOT to pack into one movie, and how it spawned multiple sequels, a superior television series (seriously, the series is way better than it should be) and a video game is beyond me. And I freakin’ LOVE this movie.

It’s certainly not for everyone, and you really have to be quite forgiving of a lot to even start to enjoy “From Dusk til Dawn.” But underneath it all, the film is at its core, a fun, violent, low budget vampire flick with a charming anti-hero who, however likable he is, never stops being a bad guy. “From Dusk til Dawn” earns its place among the cult classics. I’ll be the first to admit that on paper (and to some extent on film) it shouldn’t, but it does. I usually like to end these reviews with a clever play on words or quote, but given that there isn’t a single line in “From Dusk til Dawn” with an f-bomb, which makes the end of this review a….dark night?

I’ll show myself out.