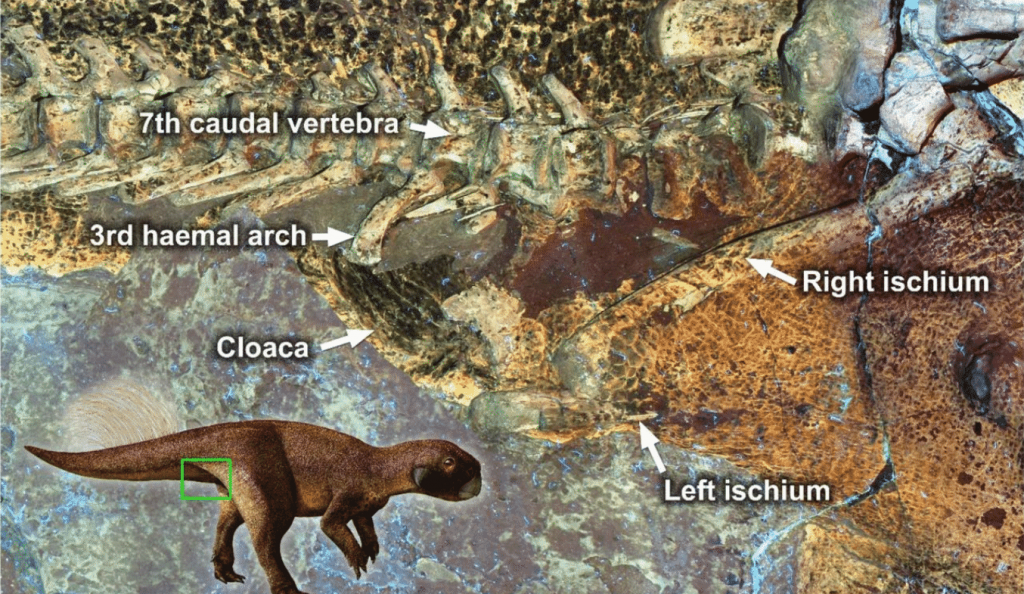 New Discovery Reveals The Secrets of the Dinosaur Anus

Thanks to a newly discovered specimen of a crocodylian-style cloaca, we now know more about dinosaur anus than ever before. There was a new study published which goes into depth about the placement and size of the cloaca found on a Psittacosaurus. While sex of the specimen is not known because there were no identifying features found, but we can assume that the cloaca would be the same in both sexes of the animal.

Our knowledge of the reproductive biology of dinosaurs covers a range of aspects, from brooding behaviour to nesting style and the timing of sexual maturity. Yet, the basic anatomy and function of the cloaca in non-avialan dinosaurs remains unknown. Here, we describe the outer morphology of the only known non-avialan dinosaur cloaca, preserved in an exceptional specimen of the early-diverging ceratopsian dinosaur Psittacosaurus. We clarify the position of the cloaca with respect to the ischia and caudal vertebrae and document the scales immediately adjacent to the abdomen and tail. We find that the cloaca is from a near-sexually mature subadult individual and is most similar to the cloaca of crocodylians, to the exclusion of lepidosaurians and birds. However, the sex of SMF R 4970 could not be determined as the cloaca and the rest of the specimen does not yield any sexually dimorphic information.

The study was published on October 12th of 2020 but is now just getting attention. It’s interesting that we’ve never found an intact specimen before. But given the fact that it’s soft tissue in this area and that usually deteriorates this discovery is all the more important.

Of course we could know everything we ever wanted if we were to pull a stunt out of Jurassic Park like the recently harvested insect DNA from tree sap. It’s just a matter of time until we find that mosquito with all the dino DNA.