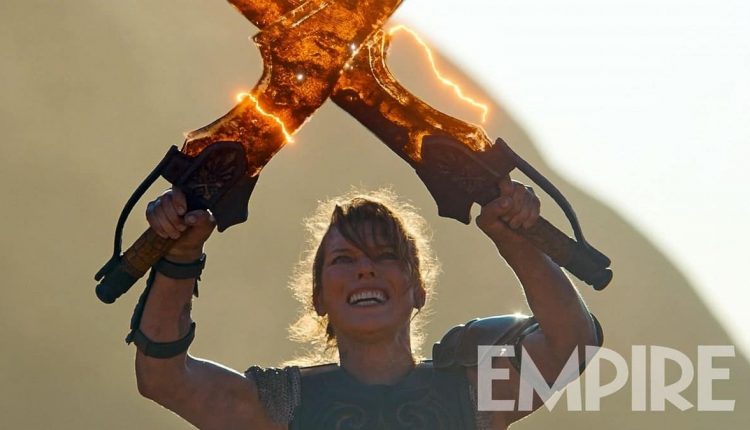 It’s been awhile since we’ve heard anything about the live-action feature film adaptation of popular video game, “Monster Hunter,” starring Milla Jovovoich. We didn’t FORGET it was happening, it just sort of…..slipped our minds for a bit.

That said- this teaser strangely echos “Dune,” with giant creatures rising from the desert sand.

Behind our world, there is another: a world of dangerous and powerful monsters that rule their domain with deadly ferocity.

When an unexpected sandstorm transports Lt. Artemis (Jovovich) and her unit (TI Harris, Meagan Good, Diego Boneta) to a new world, the soldiers are shocked to discover that this hostile and unknown environment is home to enormous and terrifying monsters immune to their firepower. In their desperate battle for survival, the unit encounters the mysterious Hunter (Tony Jaa), whose unique skills allow him to stay one step ahead of the powerful creatures. As Artemis and Hunter slowly build trust, she discovers that he is part of a team led by the Admiral (Ron Perlman). Facing a danger so great it could threaten to destroy their world, the brave warriors combine their unique abilities to band together for the ultimate showdown.

One of our favorite things we’ve read about this film is Anderson telling Empire Magazine about their monsters:

“ONE OF THE THINGS I FELL IN LOVE WITH WHEN I FIRST PLAYED THE GAME – AND I’M AN AVID FOLLOWER OF THE GAME AND OPTIONED THE GAME FROM CAPCOM 10 YEARS AGO; I WAS PLAYING IT WHEN IT WAS RELATIVELY UNKNOWN IN THE WEST AND NO-ONE ELSE WAS REALLY AWARE OF IT – WAS NOT ONLY ALL THE CREATURES BUT ALSO THE ENVIRONMENTS THEY LIVED IT. THEY REALLY DID A GREAT JOB OF CREATING THIS WORLD, THIS ENVIRONMENT, THIS WILD HABITAT, THAT THEY LIVED IN.

ALL OUR MONSTERS ARE 50-60 FEET TALL. THEY’RE REALLY AMAZING. WE’RE BUILDING THEM IN EVEN MORE DETAIL THAN THE DINOSAURS OF JURASSIC WORLD. AND THEY LOOK EVEN BETTER, BECAUSE WE SHOT ON REAL LOCATIONS IN SOUTH AFRICA AND NAMIBIA, WHICH GIVES THE ANIMATORS SOMETHING TO REALLY MATCH INTO: REAL WIND, REAL DUST, REAL SUN-FLARE. THE MONSTERS ARE THE ONLY CG THING IN THERE.”

Currently, Screen Gems and Sony Pictures are eyeing a December 2021 release for the film.

What do you think?