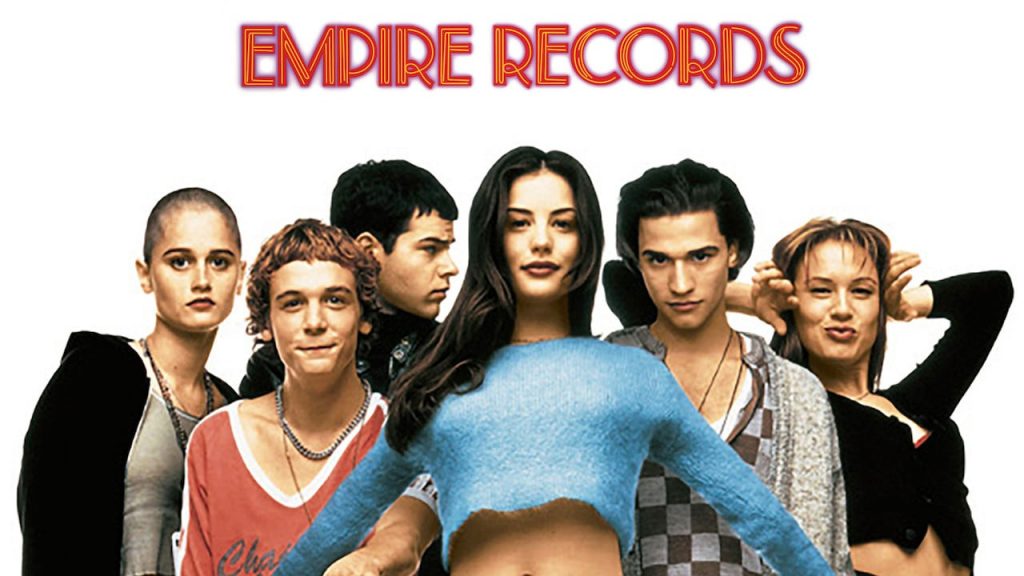 As I have previously stated, September of 1995 seems packed with films that completely represent the times. I have purposefully saved “Empire Records” as the final movie for this month, as it is not only one of my all time favorite films but it couldn’t be more 90s. I’ve used this hyperbole to describe most of the films released this month (like with “Hackers“) but I truly believe that no film encapsulates 90s culture quite like this one.

From its cast to its setting to its day in the life coming of age teenage angst, it has everything. Likewise, as with most films during this time, it is powered by a soundtrack that both holds up today but is also fossilized in 1995. With a young, assorted cast of before they were stars and iconic quotes, in short, “Empire Records” IS the 90s.

Taking place at an independent record store and follows the young employees in a day and a life of extraordinary events. The Empire Records store is set to be taken over by a big chain, thus changing the free for all laidback culture the employees have created for themselves forever. In an effort to try and keep the store as it is, Lucas (an employee) tries to use the money from the store safe to gamble, hoping to make enough to save the store. This, of course goes horribly wrong, and Empire Records now has to come up with the missing money and fight to keep their store from being taken over by corporate greed.

It is truly incredible the amount of stars “Empire Records” has considering it inevitably bombed at the box office and has been generally panned by critics across the board. Almost every single one of the main cast have gone on to have long standing careers, with some like Rene Zellewegger eventually reaching the upper echelons of Hollywood. The film has chock full of recognizable faces, all showing terrific promise in their balance of comedic timing and dramatic moments. There is an enduring charm to this film that is elevated by its strong, young, and varied cast. There is a palpable chemistry among them all, one that is indeed purposeful as the film is meant to represent that long lost work environment of a place like a record store.

To further that point, “Empire Records” feels like Tower Records come to life. I am aware that mentioning a relic like Tower Records dates me, but you wouldn’t have the evergreen nostalgia that has garnered the films cult following without the reminders of a simpler time. The Tower Records legacy (and many independent places like it) is an iconic one, one that involves a number of real life antics that this film clearly took inspiration from.

What’s bizarre is that Tower Records serves as the muse for both the independent record store culture but also the massive corporate conglomerate the characters are fighting against. But those of us both young and old enough to remember these days know that “Empire Records” is everything we wished working in a record store was like.

While many critics of the film continuously point to its simplicity and by the book teen comedy, these things are exactly what make “Empire Records” stand the test of time. The film is a kitchen sink of coming of age antics. From archetype characters to teen drama themes like love, drug abuse, suicide attempts, broken homes, and yes, sleazy washed up 80s pop icons that shameless sleep with (let’s just say it) underage or barely of age girls. When you step back for a moment and list the plot that way, it’s hard to believe this is even a comedy in the first place. But it is- and approaches everything with a tongue in cheek charm without ever downplaying the severity of the subject matter. Everything has consequences, and while it all works out in the end, “Empire Records” does a lot with what little it has.

Like so many films this month, “Empire Records” has a soundtrack that deserves to be discussed. It is perhaps the most recognized element of the film, with some critics going as far to say “Empire Records” is a soundtrack that needed a movie. The amount of music featured in this movie couldn’t even be contained on one CD, with so many songs not featured on the official soundtrack it could quite literally be a collection of 90s rock. Gin Blossoms, Toad the Wet Sprocket, Coyote Shivers, Better than Ezra, and yes even The Cranberries all show up on the official soundtrack. Featured in the film but not on the soundtrack? Dishwalla, Gwar, Dire Straits, Sponge, and of course, Rex Manning himself. The track list is as long as it is iconic, soaked in nostalgic eargasms with a classic 90s comedy/drama to match.

I am perhaps failing as an objective critic here, but I am incapable of removing my nostalgic glasses to write anything more than an “Empire Records” love letter. It has long been in my top 3-5 favorite films of all time, and on an even shorter list of films I could quote from beginning to end without error if ever needed to. I won’t say that it is strong enough to garner new fans today, as it is truly a film placed in a time that has long been forgotten. It is only transcendent for those of use that are old enough to remember, and not meant for generations who don’t know a single song from any one of the 11 aforementioned artists. That’s not to say it is incapable of new fans, just that that not necessarily why it is remembered so fondly and held in such high esteem by its fans.

I usually like to end most of my reviews with a play on words or a memorable quote from the film, but “Empire Records” has so many I feel like choosing any one of them would do a disservice to the others. I guess I shouldn’t have to explain my art to you. But since I have to keep even the best of films on a level playing field, I will leave you with a classic sentiment: Happy Rex Manning Day!