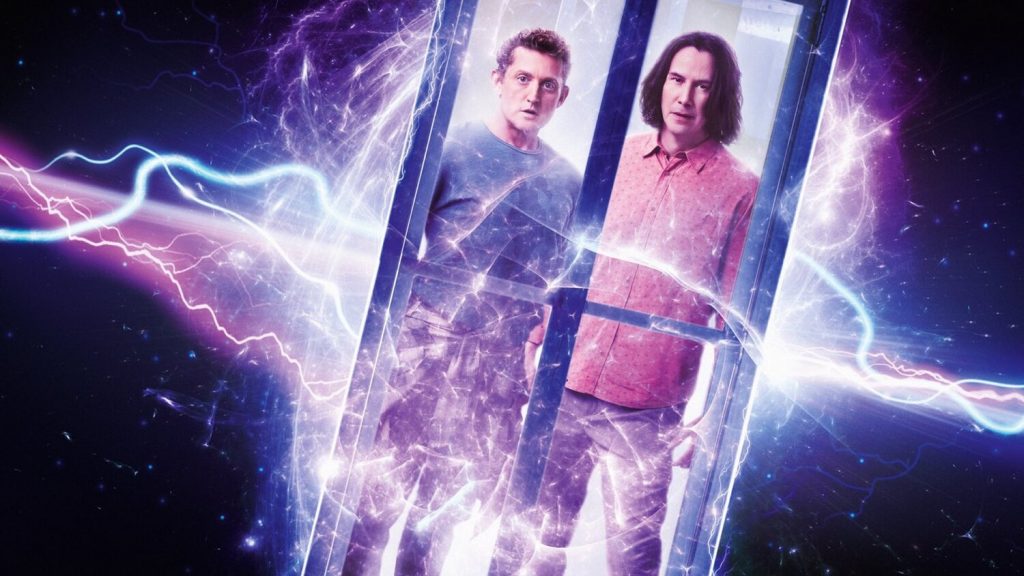 In pre-pandemic work, Hollywood seemed set on either rebooting or adding new sequels to just about every franchise in existence. The running trend has been anything 15-25 years old is due for another installment. Nevermind the fact that it is rarely a film anyone asked for, with most fans groaning and rolling their eyes at the desperate attempt to capitalize on nostalgia.

“Bill & Ted Face the Music” arrived this weekend on VOD 30 years after it’s original, and roughly 28 years after its sequel. It would seem ill advised by most to reach so far into the past and try to release something like Bill and Ted in the present. Despite all of this, “Bill & Ted Face the Music” somehow works. Here are some reasons why it succeeds where so many others failed.

One major aspect contributing to Bill and Ted’s success is that a majority of the original creators are involved. Both writers Chris Matheson and Ed Solomon penned all three installments. This is a pretty rare occurrence, as many writers (and directors for that matter) of beloved franchises move on to other projects and don’t return.

Typically, it’s at the behest of a studio seeing green rather than contributors of the original project that drive additional installments. For “Face the Music“, the guys who gave us the original vision return to further it. This helps to capture a lot of what made the originals so endearing and long lasting among fans. Add to that the original Bill (Alex Winters) and Ted (Keanu Reeves) reprising their roles, and you have a pretty good recipe for success.

With much of the original creators returning, this lends itself to next thing that makes the film successful: silliness. Remove the nostalgic blinders and it’s clear that “Bill & Ted’s Excellent Adventure” is silly. The entire premise is unapologetically ridiculous and absurd. But that is exactly what makes it so much fun. You don’t need to ask questions, you just need to enjoy the phone booth ride.

With the original writers and cast returning, it is much easier to identify the things that have made the franchise stand the test of time and double down on them 30 years later. “Bill & Ted Face the Music” maintains the silliness of the originals, and while some may feel bringing the zany 80s to 2020 is a mistake, I would argue that this is exactly what makes this relatively unnecessary sequel what fans want.

You can work hard to maintain the original integrity of the franchise on paper, but if your director isn’t on board or capable of bringing it to life, it’s all for naught. Luckily, Dean Parisot has a clear understanding of what made “Bill & Ted’s Excellent Adventure” so fun. Parisot has also directed “Fun with Dick and Jane“, “Red 2“, and most notably, “Galaxy Quest“.

“Galaxy Quest” is singled out because while “Face the Music” is far from a sci-fi “Star Trek” parody, it is also an incredibly silly film with a ton of heart. If you’re going to tackle a silly franchise like Bill and Ted 30 years later, whoever is at the helm must have an understanding of what made such a whacky idea work in the first place. Though Parisot’s resume is small, he’s seems to be able to tap into the balance of material and execution.

Lastly, even a film with original writers and a strong director can only be as good as its actors. Luckily, the cast is chock-full of returning members that fall right back into their respective roles. The standouts of old in “Face the Music” are Alex Winters and William Sadler (Death). While it’s great to see Keanu Reeves back in a role that put him on the map, he seems to have some difficulty tapping into the silliness of Ted, having spent that latter years of his career being much more dark and brooding. That’s not to say he doesn’t have moments. Both Winters and Reeves shine when they’re playing future versions of themselves, with their original chemistry still very much in tact. Likewise, Sadler has no problem becoming Death again, a character who truly could have used more screen time here.

Furthermore, Samara Weaving and Bridgette Lundy-Paine are welcomed franchise additions. Weaving is a star to watch, disappearing in just about every role I’ve seen her in recently. The fact that she’s gone from horror-comedy bride in “Ready or Not” to psycho killer in “Guns Akimbo” to the daughter of Ted all in a span of 2 years is quite something and telling of her acting range. All three of these roles are wildly different, and Weaving seamlessly transitions to each one with ease. Lundy-Paine steps up to the challenge as well, perfectly capturing the best parts of Keanu’s Ted in a spot on parody.

“Bill & Ted Face the Music” is by no means a perfect film. We do have a pretty understandable love of the first film as you can see and hear on our Retro Crew Review episode here, you can also read another Nerdbot review here, as well as watch The Jack of All Nerds Cineblokes review here for a more in depth look at the film.

Overall, the attempt to revive the magic of “Bill & Ted’s Excellent Adventure” 30 years later somehow maintains its relevance and fun. Be it 1989, 1991, or 2020, there is still no greater message than the true meaning of Bill and Ted: be excellent to each other.