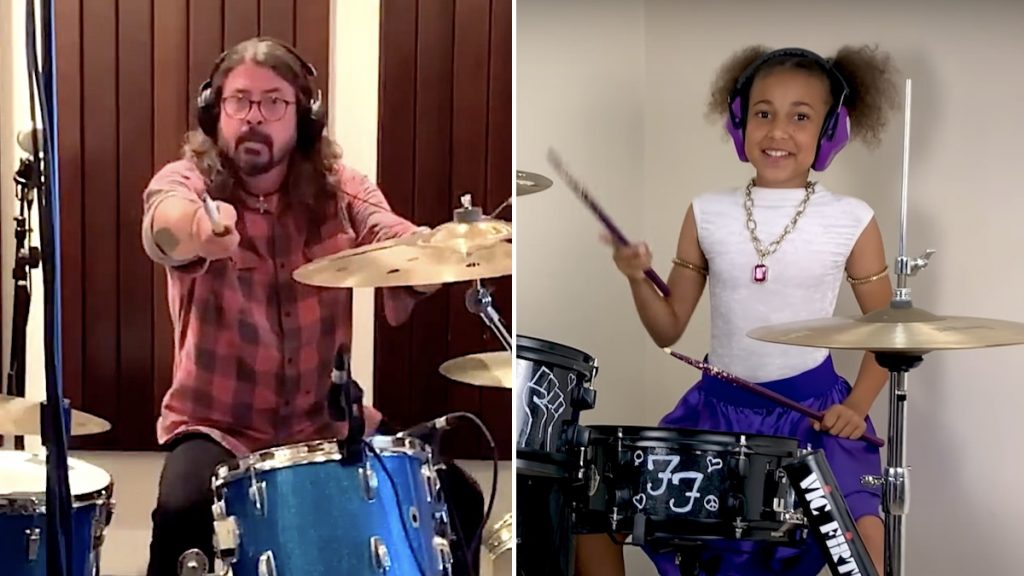 10-year-old Nandi Bushell has been taking the internet by storm with her drumming videos on YouTube. The musical prodigy can be seen rocking out to songs like “Guerilla Radio” by Rage Against the Machine, “Toxicity” by System of the Down, “You Got Me” by the Roots, and “Everlong” by Foo Fighters. The young girl from England is a joy to watch as she drums (as well as sometimes playing guitar and bass) iconic tracks with excitement and skill. After Nandi tweeted her performance of “Everlong” to Foo Fighters frontman Dave Grohl and challenged him to a drum battle, it not only reached him but he also accepted the challenge.

“My dream is to one day jam with Dave Grohl, @taylorhawkins and all the @foofighters! Mr Grohl I would love to have a drum battle with you! I LOVE Everlong it’s really hard to play as it’s so fast but so much FUN!”

“Hey @Nandi_Bushell! Challenge accepted. Haven’t played these songs in a loooooong time…..thanks for the inspiration!!! Your move!!! Your friend in rock, Dave (Thanks to my daughter, Harper for letting me borrow her drum set).”

Grohl played about 30 seconds of “Everlong,” noting that he hasn’t played the song since 1997, and that Taylor Hawkins was actually the one who played it on the studio recording. He told Nandi that he was a fan of her videos and had “gotten 100 texts” about her open drum-off challenge. He then played “Dead End Friends” by Them Crooked Vultures, ending the video with a direct challenge to the prodigy, “Now the ball’s in your court!” Nandi wasted no time in responding, saying she now needs to learn “Dead End Friends,” and that she’s going to “Checkmate this one too!”

In world that seems to have an endless stream of sad news, Dave Grohl once again proves he’s one of the coolest guys in rock today, and watching a talented young girl get to drum with her heroes is exactly the kind of joy we need right now. Here’s hoping this little drum challenge continues. Rock on!