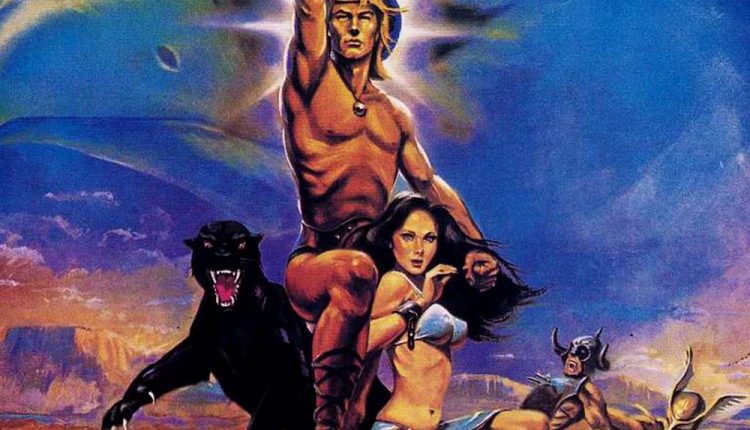 “The Beastmaster” at 38: The Good, Bad, and Possible Reboot

[Editor’s note: This piece about “The Beastmaster” comes to us from Anders Scot Hudson, cultural authority and resident Old-Man-Yells-At-Cloud on several subjects across the known universe.]

For those of us who are about to, or have crossed the silver border into the age of 50, we almost all have a clear nostalgia for the golden age of sword and sorcery films. From household names like “Conan the Barbarian” to lesser know titles like “Barbarian Queen” and “Hawk the Slayer-” these titles immediately bring in a flood of memories.

They were inspiration for our first edition D&D campaigns, the epic soundtracks to our garage weightlifting, the reason we visited the cutlery store in the mall weekly, and even a twinge of first crop teenage horniness from that two second glance of Lana Clarkson’s side boob.

Thanks for jump starting my puberty, RIP.

These movies always seemed to have a very palpable foreign element to them, and indeed they were usually shot overseas in non-union locations, that were cheaper and not as big into those pesky safety regulations. Much like the spaghetti westerns of the previous decade, and the “Giallo” horror genre slightly after, Italy was a key player in producing some of the most iconic titles of this era. But even places like Argentina, the Philippines and Portugal threw in to help provide the rich fantasy landscapes that were made out of spray painted cardboard.

With streaming services being able to option distribution rights for these features very, very inexpensively; what was originally conceived as a good way for these services to pad their catalogs with content, it also opened up these titles for a new generation of fans to enjoy the Sword and Sorcery films that the pre internet gen-x nerds cut our teeth on.

One of the best and worst of these that was the 1982 film “Beastmaster,” directed by Don Coscarelli, starring Marc Singer and Tanya Roberts.

Believe it or not, this was actually a film adaptation of Andre Norton’s novels of the same name, and it spun off a sequel in 1991; “Beastmaster 2: The Portal of Time,”  a made for TV feature to close out the trilogy “Beastmaster 3: Eye of Braxus,” and even a short lived television series in 1999 that covers Dar, the main character’s backstory.

There were frisky trained ferrets, for the love of all things holy, what’s not to like?

Truth be told, knowing that they had planned for the love interest Tanya Roberts to pose in Playboy to help boost interest in the first film (a plan that failed since the movie was released ahead of Playboy’s packed editorial schedule where she would later be featured); the producers could have probably stopped at one film and saved the money. Despite it’s less than lukewarm reception in the box office, The Beastmaster has persisted as one of the most remembered films of the genre and the era. It had some VERY cool villains, pretty much opens up on cult driven child sacrifice, and keeps the “magic” at a dull roar to stay head and shoulders in the “low fantasy” category.

Can we even talk about this nightmare fuel for a sec?

As “Beastmaster” approaches it’s 40th anniversary, Coscarelli has been looking at doing a home release remaster of the original movie, as well as talking about a full cinema reboot. Now in the tradition of Hollywood-adjacent films, this story gets a 2020 twist.

Coscarelli secures the production rights to his story again, and in the effort to get the camera negatives for the remasters, finds that at some point the negatives were removed from their vault by the previous rights holder, and were moved to the personal property of “someone” who may have been a legal representative of the rights holder. The home where the negatives were stored was then sold, and the original negatives are now missing.

Now the hunt is on to find six cans marked “The Beastmaster OCN,” with the prize of this quest being the person who saved the Beastmaster Remaster, and the potential undying adoration of gen-x geeks world wide.  So keep your eyes peeled! We all have our fingers and toes crossed they didn’t make their way to a dump somewhere, and the team has a not as attractive plan B for the remaster. Still, this is another place where our collective internet sleuthing could save the day.

Have you seen these cans?  (or ones like them?)