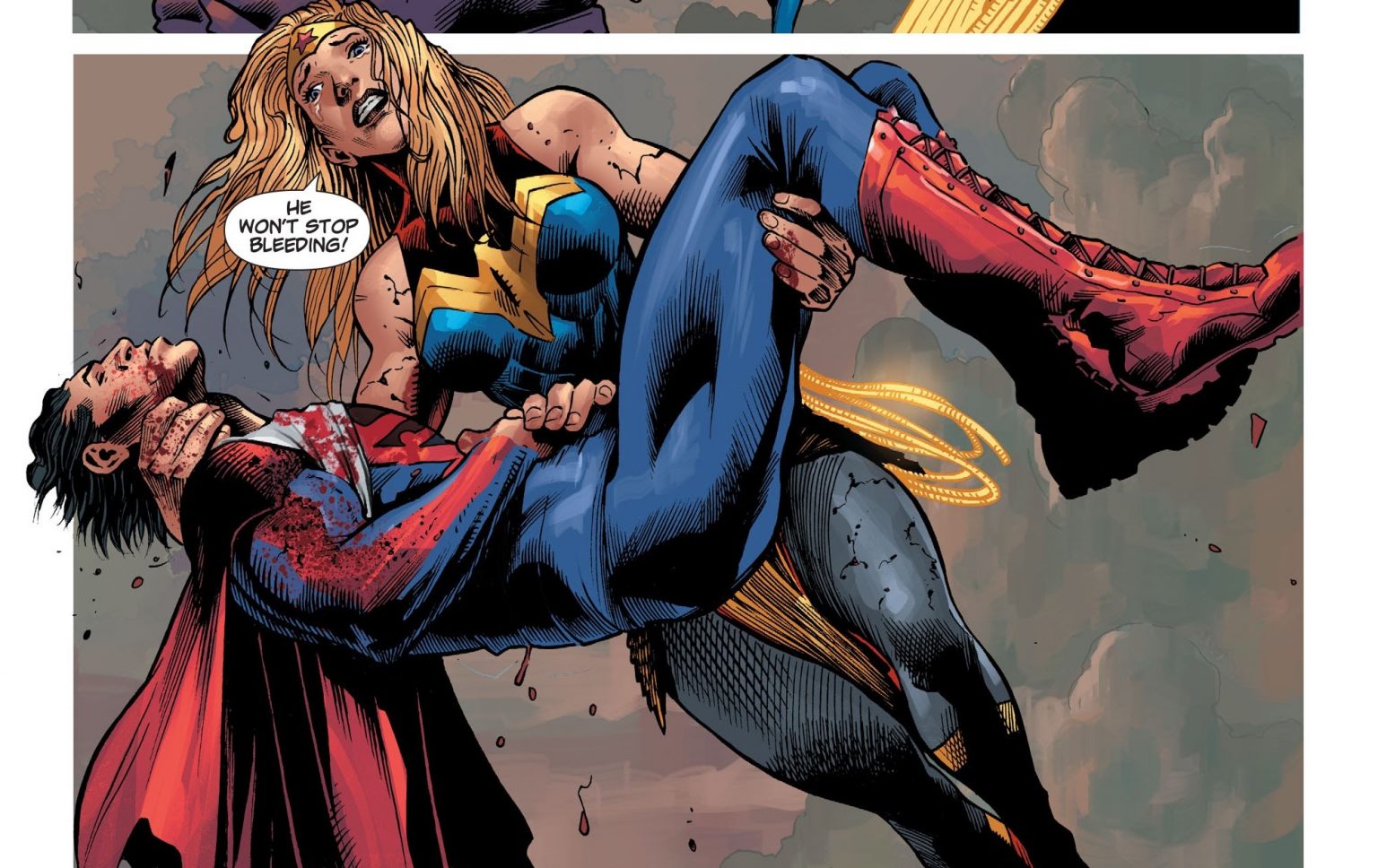 We’re back at it with issue two of the hit “we swear they’re not zombies guys” series DCeased: Dead Planet, where anything can happen except long term survival.

In the last issue of DCeased: Dead Planet, the earth two Justice League returned to earth one in search of those still fighting against the Anti-Life Virus. They find cyborg, who reveals that the cure to the virus was within him all along. A revelation made clear right after he’s stabbed with a magical kryptonite sword while trying to stop a fight between corrupted Wonder Woman and Green Canary.

So will he die? And how are the heroes that were left behind doing? Lets dig in and find out.

We open the book with Roy Harper, Arsenal, attempting to save some survivors from the infected only to be burned alive by Beatriz da Costa, Fire. The Shadowpact, a team consisting of Blue Devil, Red Hood, Ravanger, Ragman, Detective Chimp, Zatanna, and Constantine, arrive and take down the infected with the help of Swamp Thing. Swamp thing then tasks most of them to investigate a mysterious garden, filled with humans, in Australia that he cannot get into.

The Redhood and the Ravanger head over with the surrviors as the Shadowpact splits up. Meanwhile, the group meets up with Ivys Garden and their group, hoping that they’ll have the abilities to research the cure and heal Johnathan Kent. Damien and Jason reconnect, Cassie and Damien kiss, and Green Canary brings along an infected Green Arrow with hopes of curing him.

The Shadowpact show up to the “garden” in Australia and attempted to cross a field of fire, infected and a moat of blood. Said moat of blood is actually an infected plastic man, which quickly kills everyone but Detective Chimp, Constantine and Swamp Thing. The book ends on the narration; “Earths magical rescuers fell into a mouth of evil, while a greater evil looked on with cold uncaring eyes.”

The shock factor, something (in the last issue) I’ve attributed to being a highlight of the series, is approaching over-usage. But the fact that writer Tom Taylor is starting to establish new emotional stakes, such as Cassie and Damiens’ relationship, will help keep the audience invested even if their favorite is likely to die.

So far, the story has been decent, with the biggest complaint being that the Justice League Dark spin-off crew not having any type of shielding when flying over the infected. For years they’ve been doing this, you’d think they know better.

And while the original DCeased had a lot of time jumping and moving around, this seems to be a bit more linear, which is exciting since the tension will flow smoother from issue to issue. So when events, such as Superman being hurt, happens, instead of cutting to weeks later( like during the first series) we can follow that consequence and see as it develops.

The sketchy Gothic-esq art that Trevor Hairsine pulls off really works, especially during those big dramatic panels and during the more intimate moments. Due to early solicitations, we know that the the New Gods are going to be involved in the next few issues.And it’s going to be interesting to see how Hairsine pulls off the designs of the said gods and their devices,

DCeased is written by Tom Taylor, with Hairsine on pencil’s, Gigi Baldassini and Stefano Gaudiano on Inks, Rain Beredo on colors and Saida Temofonte on letters.