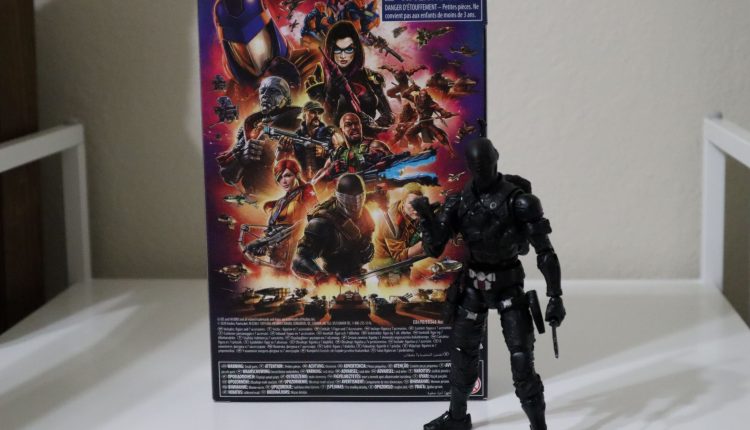 Author’s Note: The announcement of Hasbro’s G.I. Joe Classified series got the toy world talking. As one of the most collected and collectible franchises on the toy scene since the 1980s, every fan and toy collector had an opinion about the upcoming six-inch versions of their classic favorite characters. I write this to say, as a Joe fan who grew up watching the cartoon, but never collecting the toys, my attachment is to the characters more than the merchandise. I thoroughly understand and respect the fans who wanted this line to stick to the 3.75-inch standard and I find Hasbro’s response to this outcry pretty encouraging. It looks like some really great retro options and updated sculpts are coming our way soon. But for the purposes of this review, I’ll just be looking at the figure as presented in its six-inch format without adding thoughts or comparison to its classic counterpart. This is the dawn of a new era in G.I. Joe collectibles and I want to take a really close look at what we can hope to have in store down the line.

In spite of the kerfuffle from enthusiasts who swore they would never buy a six-inch G.I. Joe figure, the Classified series was predictably hard to get my hands on. I finally snagged my Snake Eyes a few days ago at my local Walmart. I found an employee stocking the toys shelves and expressed my dismay over never having seen the G.I. Joe branded endcap that my toy groups were posting endless pictures of on Facebook. The employee shyly led me to the swimming pool toys and accessories aisle where the Joes were squashed on a bottom shelf, half-hidden behind tubs of pool chemicals and shiny boxes of diving darts.

Even hidden out of sight and department, the packaging on these figures is eye-catching. Tracie Ching’s artwork on the back panel is like looking at a classic action movie poster with explosions, tanks, jets framing all of my favorite G.I. Joe heroes and Cobra villains. It’s truly a  treat to behold. The design of the rest of packaging is sleek and subtle but precise. And although we didn’t get a Timber figure with Snake Eyes this time around, there is a stunning portrayal of him on the box that feels satisfying all the same.

This first wave of the Classified series includes some of the franchise’s most iconic characters, but I chose Snake Eyes to pick up and review for a couple of reasons. First, as always, I’m obsessed with testing the mettle of figures marketed as being “highly articulate”, and you better believe my expectations will be high on a ninja figure. Second, Snake Eyes should have the most complete accessories pack in the line, and I wanted to see what would actually be getting at our good old fan favorite $19.99 MSRP. I’m pleased to say that I was not disappointed on either front.

This figure can move. Flexibility is built into every single articulate point he has and each one functions with buttery smooth perfection. I count around 22 points of articulation on this guy and each of those has a full, easy range of motion. The lateral lift on arms and legs has been lacking for me on recent Hasbro figures, but Snake Eyes gets the full 180 degrees I want and firmly holds position at every point in between.

The sculpt feels to me like a modern and reverent tribute to the classic character design. Snake Eyes dons black on black everything, a variety of tactical gear and a sleek visor. The mixture of textures from his canvas trousers to his glossy boots and leathery knee and elbow pads make every inch of this monochrome design feel vibrant and alive. Which brings me to the king of accessories packs. Counting the removable vinyl belts, garters and armbands, this figure comes with an astonishing fourteen manipulatable accessories. Guns, katana, knife, silencer, backpack, sheaths and holsters are all included, easy to interchange and so incredibly cool to look at.

As a collector who routinely and with pride announces that I play with my toys, I am completely thrilled with the “playability” of this action figure. I can’t wait to pick up the rest of the line and re-created some of my favorite moments from one of my favorite childhood cartoon series. History aside, as a stand-alone figure, this six-inch Snake Eyes is a complete success. Within the context of the classic 3.75-inch standard, I think we can all look forward to amazing things from Hasbro for this property in the future.

Check out our review below: