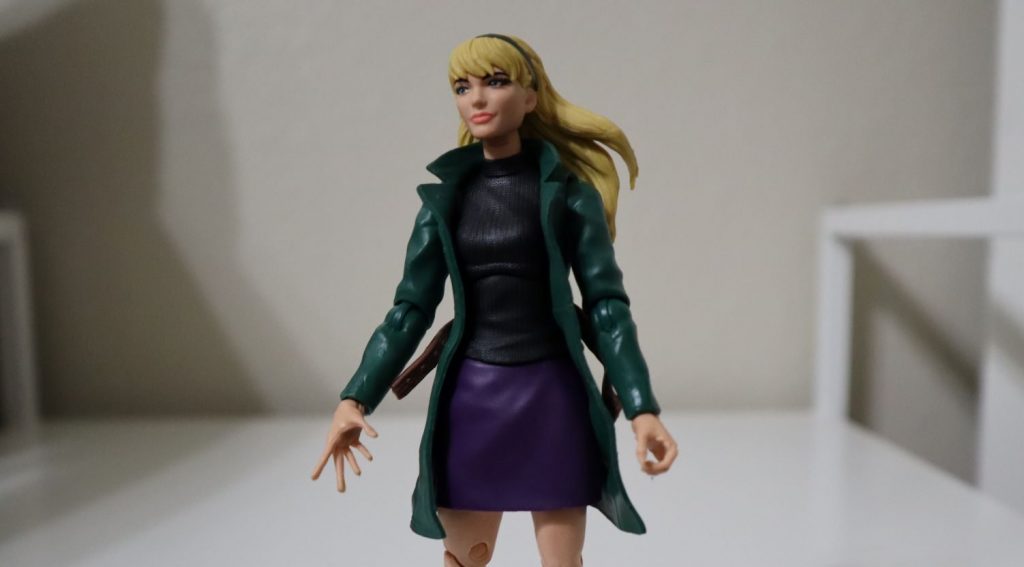 When Hasbro announced the pre-order for a Vintage Spider-Man line set for release in September, Spidey fans rejoiced. The line (which includes Spider-Man, Peter Parker, Gwen Stacy, Electro, DareDevil, and The Green Goblin) is a great mix of heroes, supporting characters and villains, all beautifully displayed on a sharp vintage card. The nostalgia and collector appeal are on point. So when I found the Gwen Stacy figure from this line on the shelf of a local toy store, I snapped her up straight away, albeit with a tinge of guilt that something must be amiss for me to have found her on the shelf so early.

From the moment I took her out of the package (a collector sin that was, in itself, quite a challenge to overcome) I was overwhelmed by two thoughts: “She’s perfect!” and “Mary Jane??!!” I’ll explain.

As to being perfect, the points of articulation function are hindered quite a bit by the vinyl components of her clothing, which always bugs me. But, in this case, with this specific version of Gwen, the figure really does what it’s supposed to do. Could there be more thought out into how to make her a well and truly highly articulated figure? Of course. (Double-jointed elbows, please!) But seeing as this specific Gwen  is  a lovely young reporter without superpowers in this universe, her limited posing potential really doesn’t end up being problematic.

The accessories are another story.

Gwen Stacy comes with some, shall we say, puzzling accessories. First, the strange positioning of her hands with no alternative options was a pretty big oversight. The left hand is closed in a circle to hold a rolled-up Daily Bugle newspaper accessory while the fingers of the right hand are sculpted with unusually long fingers, fanned out to clutch her blue folio accessory. The problem here is two-fold. First, these accessories take no small amount of manipulation to fit into Gwen’s hands and, without a bit of putty, the folio is just not clutchable. Secondly, without the accessories in hand, the hands look incredibly strange. It’s frustrating that a pair of relaxed hands wasn’t a part of her accessories pack. But the right hand can be turned palm back to look a bit better and the Bugle works in hand, so, strange though they may be, the hands can work.

What doesn’t work in any way (and, quite frankly just doesn’t belong) is what I’ll be calling “Red-Haired Gwen”. And before you jump in to correct me, hear me out. The final two accessories are a Midtown High notebook and a beautifully sculpted head with red hair. When I first saw the alternate head, I was just barely able to feel as if there were a moment in time when Gwen may have dyed her hair. Or maybe I was recalling Emma Stone as Gwen in the Amazing Spider-Man movies. True, she went blonde for the role, but perhaps it was more of a strawberry blonde. A possibility that I was not thrilled to consider was that this was intended to be a Mary Jane Watson head. I checked the packaging and the Hasbro Pulse website and there was no mention of the alternate head being included as a Mary Jane, so I’ve decided to give Hasbro the benefit of the doubt on this one and stick with the idea that somewhere in history is a Red-Haired Gwen and this head pays her homage.

What absolutely would not be alright (from a fan or collector perspective) would be if Hasbro took these two wildly popular and beloved, absolutely essential and very distinct female characters and reduced their presence and impact on the universe to a lame head swap. Gwen is Gwen and MJ is MJ and, just like with every comic book character, their wardrobe is as critical to who they are as a superhero’s costume is to them. These character components can evolve and change, but you could never put Peter Parker’s head on Matt Murdock’s body and come up with any kind of  acceptable Spider-Man or DareDevil. So surely, Hasbro wouldn’t attempt such a thing with these two characters in this case.

And so, while I’ll be using my “Red-Haired Gwen” to improve my Stepford Cuckoos or customize my own Jean Grey, I will not be trying to make a Mary Jane out of her. I’ll look at the inclusion of this accessory as a strange choice, and not a total disregard for Gwen and Mary Jane as complete characters who each deserve their own fully fleshed-out action figures.

All things considered, barring a couple of strange accessories and the missing relaxed hands, this figure is one of the best in my collection as far as perfectly representing the character. Spider-Man fans and collectors are sure to love Retro Gwen Stacy and I predict a lot of people will be buying this set in duplicate to take advantage of the opportunity to display them packaged along with the rest of  their MOC collections. Overall, this Gwen Stacy has gotten me really excited about what’s to come with the rest of this line. The Vintage Spider-Man Marvel Comics Collection promises to be a nostalgia collector’s dream come true.