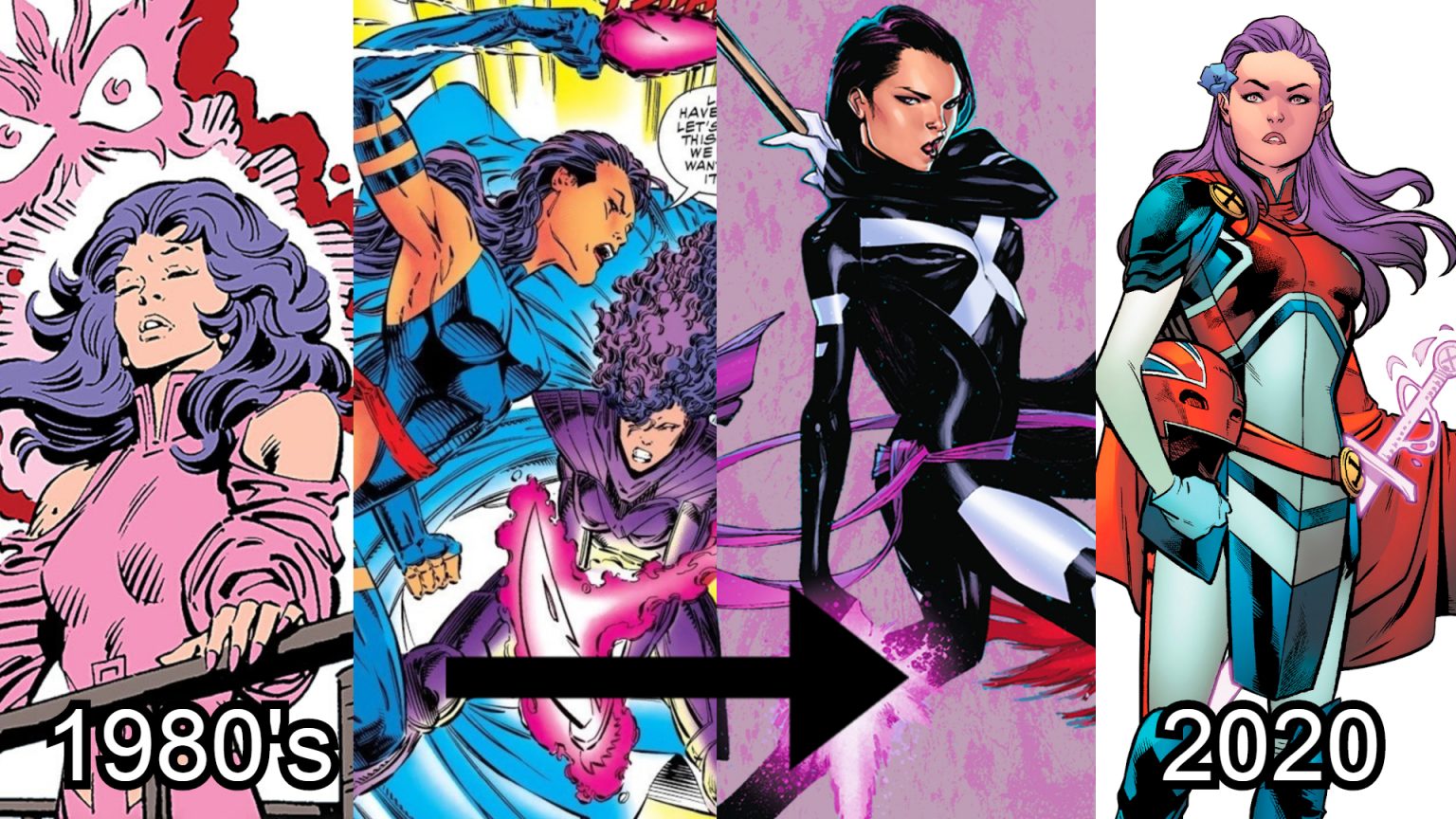 From Zero to Hero: A Two-Minute History of Betsy Braddock

From model to spy, to X-man to teacher, to captain, a two-minute history of Betsy Braddock, aka Psylocke (and later, Captain Britain)

Many comic book characters have a publication history that are molded by the whims and prerogatives of their writers- and for Elizabeth “Betsy” Braddock, this includes body-switching, kidnapping, soul switching, and death, resurrection and so much more.

Welcome to the latest edition of “Zero to Hero: A Two-Minute History,” Nerdbot’s series of articles where we explain comic book characters history as quick and compact as possible.

Writer Chris Claremont created Elizabeth Braddock as a supporting character in the comic series Captain Britain (1976), where she was established as the Brain Braddock’s (Captain Britain) twin sister in issue eight. She eventually developed psychic abilities and joined S.T.R.I.K.E.( the English counterpart to the U.S’s S.H.I.E.L.D), where she eventually lost her eyes to the villain Slaymaster.

It was there she was abducted by the multiversal maniac Mojo, given cybernetic eyes, and brainwashed to star in one of his reality shows until she was rescued by her brother and the New Mutants.

She went to the X Mansion to rest, earning a spot on the team by defending their headquarters during the Morlock Massacre.

Taking the name Psylocke, Betsy would accompany the X-men through dozens of adventures, eventually leading her to end up comatose on an island near China. Its there that the ninja clan, the Hand, leader Matsu’o Tsurayaba would use Betsy’s psychic abilities to save his lover, Kwannon.

Due to the interferance of Mojo’s right hand woman, Spiral, the two women’s minds were switched. Their genetic codes were melded and the two’s souls bonded. Betsy, in Kwannons body, would take the name Lady Mandarin and worked with the hand until she was saved by the X-Men.

Psylocke would work with the X-men until Kwannon, now calling herself Revanche, appeared and claimed that she was truly Betsy Braddock. The two fought and later found out their origin, and tried to Co-exist. Revanche would later ask her lover Matsu to grant her a mercy killing, due to the legacy virus that was slowly killing her.

Betsy would late die defending her teammates in the X-Treme X-men Series from the villain Vargas. She would later be resurrected, in part by her older brother Jamie Braddock who could warp reality, in order to fight cosmically powered enemies called the first fallen. She joined a team of dimension traveling superheros called the Exiles, and got kidnapped and brainwashed by the Red Queen upon traveling back home. She was eventually freed from this control with help from the X-Men.

During a mission with her team, she faced a psychic vampire Sapphire Styx, who absorbed Betsy’s soul into her. Betsy was able to absorb the power of the imprisoned souls and broke out where two things happened: she used the energy to recreate her original body and at the same time Kwannon had come back to life in her original body.

The two Women now live separate lives, with Kwannon going by Psylocke, and Betsy recently inheriting the mantel of her brother, becoming Captain Britain. While one oversees the team Hellions, the latter is the lead of the team Excalibur.

Both live on the island of Krakoa alongside the rest of the mutants.

Elizabeth Braddock has gone through many changes throughout her history, and whether any of them were good is ultimately up to the reader. One of the more confusing parts of her history, putting an English womans’ soul into a Japanese assassin, has been brought lately now that their separated.

In an interview with Women Write About Comics, Claremont touched on the fact that his change was supposed to be temporary.

” …when she finally breaks free, in the original concept in my head, the breaking free would be literal. The whole illusion or false face of “Asian Betsy” would shatter, peel off, and she would be back the way she was,” said Claremont. “But then, looking at what Jim had created—visually—she looked so cool. ‘Heck it, we can fix it later.’ “

While the history of the mutants have been tumultuous at best, their recent expansion and sability in the marvel universe( i.e. Dawn of X) has also pushed Betsy towards new beginnings.

So what did you think of the History of Elizabeth “Betsy” Braddock ? Did this article entice you to pick up some issues? Or did it just scare you away entirely? Let us know what you think in the comments down below!