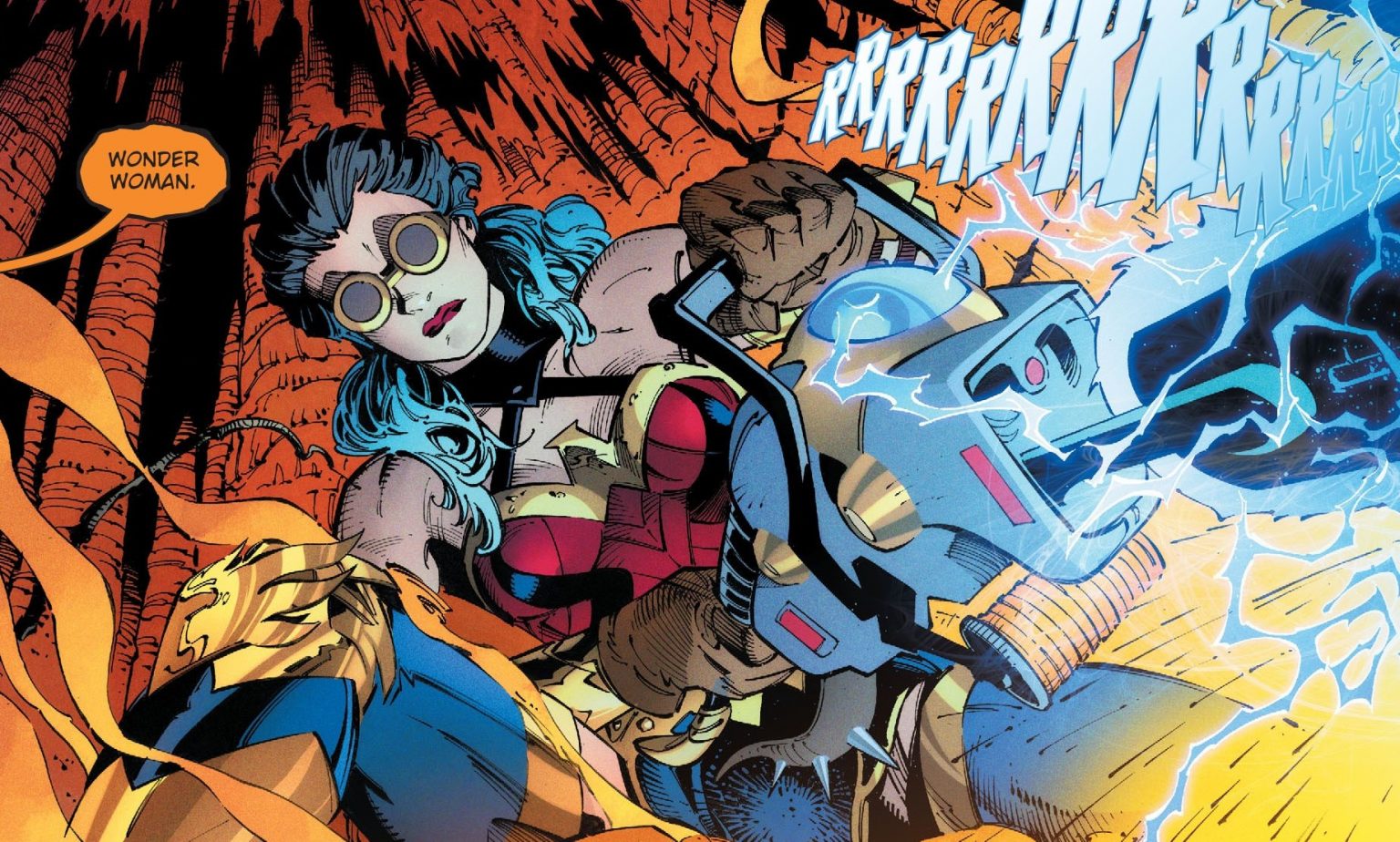 The Anti-Crisis is Here in “Dark Knights: Death Metal #1” [Review]

The DC Comic Event of the Year, “Dark Knights : Death Metal” has just been released. A self-proclaimed “Anti-Crisis,” this is a successor to 2016’s Dark Knights Metal.

This seven-part series is promising to dive deep into the lore of DC, building off of several of the universe’s biggest events, from: Crisis On Infinite Earths, Doomsday Clock, Dark Knights Metal, and the most recent run of  Justice League which leads directly into the event. The precursor to this event sold over 260 thousand copies in its debut, becoming one of the most popular series of that year.

But can DC, particularly writer Scott Snyder and artist Greg Capullo, deliver an event that’s worth the hype ? Let’s Dive in, with full spoilers ahead.

The book opens with a monologue from Sgt. Rock, whose speech is the set up for the vibe of the entire event; it’s going to be a crazy fight where hope seems lost , but your heroes are gonna fight back and ” Have some *&#%$ Fun doing it. Oorah”

We see that the world has been reconfigured into four large continents: The Hellscape, Castle Bat, Megapokolips and The Arkham Wastelands.

This is similar to DK Metal but on a larger scale- where in the first event the landscape was changed but the world’s landmass stayed the same, as well as civilizations. In this event the entire earth has seemed to be changed entirely to fit the needs of the Batman Who Laughs(BMWL) and his master Perpetua.

Wonder Woman is the leader in charge of the Hellscape, acting as a warden for all those who oppose the powers that be. While deconstructing her invisible jet, while talking to Plant Thing, she’s visited by three Batmens’\ on a prisoner delivery.

She takes in a new prisoner, and then goes to convene with the rest of the Batman Who Laughs “Justice League”. We learn that there’s only eight universes left, with Perptua edging closer to restarting the multiverse. Batman and Superman are currently on the run, with the latter being watched and slowly succumbing to the Anti-Life.During the meeting Batman psychically talks to Diana, both of whom have lost their memories of their final fight.

Batman Attacks the Batman Who Laughs and fails to kill him, raising a dead army with a Black Lantern Ring to cover his escape. We cut to a page where Lobo, on Ossex ( the planet made of living bone), finds an item that’s quoted as “the key to everything”.

Diana goes to visit the prisoner they took in earlier, and it turns out to be a weakened Wally West. He then explains to Diana, as well as the audience, to how they got to this event.

Recounting the creation of the DC universe and the events that lead up to this one. For those who need a refresh of DC lore, as well as a recap to understand the scope of this story, Wally’s explanation is well written and to the point.

The Batman Who Laughs shows up, promising that if Diana falls in line, she and her people will be safe. Wonder Woman then bisects him with her chainsaw, invisible by the Dinas jet which she was working on earlier. The issue ends with Batman-like figure recovering Sgt. Rock and Batmage activating the BMWL contingency plan.

This was a fairly strong set up issue, laying enough intrigue and possibilities to carry on the hype for the rest of the series. Because we know that everything, well mostly everything, will turn back to normal when the event is done – anything can happen. And the premise of a separated, disheartened Justice League against a deranged Batman and the creator of the multiverse is a darn good set up.

So when these crazy moments show up – Superman infected with anti-life, Wonder Woman with her Invisible Chainsaw of Truth, and Batman in with a Black Lantern Ring – its a preview of the fun that awaits this series.

Wonder Woman is the main focus of this issue, seemingly trying to be the one who’s just trying to keep everyone alive and together. Batman on the other hand is trying guerrilla tactics, believing that the world cannot be saved and that they’ve got to do with the world they have now. Superman, aside from a brief hologram, is mostly absent from the issue.

The Idea presented here, the one of the DCU being created and perpetuated on crisis’s, was a clever way of explaining the repeated universe cleanup / editorial reordering that Dc is Known for.

If you liked the issue, let us know! Did it make you excited for more Death Metal or are you skipping this series? Leave your opinion in the comments down below.