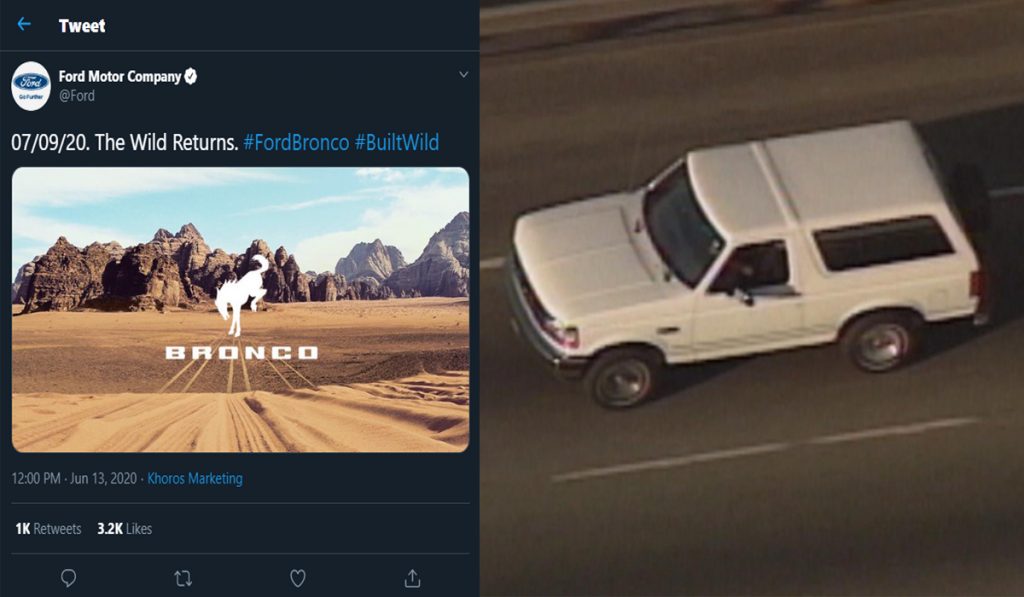 Tweet from Ford and a screen clipping from O.J. Simpson's iconic car chase in the 90's
Nerd Culture

O.J. Simpson‘s car chase was one of the most memorable in history. Police followed him on the freeway in his white Ford Bronco while nearly 100 million people tuned in to watch. This was after he was being charged with murder in the slayings of his ex-wife Nicole Brown Simpson and her friend Ronald Goldman. In fact, it happened 26 years ago with the 25th anniversary of it just last year. Which may have been part of the reason that they chose his birthday for the release of the new car.

It’s a very interesting way to put it by saying “The Wild Returns.” Originally, Ford was not pleased by the press surrounding O.J. and the white Ford Bronco. But as nostalgia reigns supreme it seems companies will use anything and everything to get noticed. Including using a convicted murderer’s birth date as a release date for a vehicle synonymous with the getaway chase.

Now this could be a coincidence, and yes people could be looking into this too deeply. But coincidence or not, it’s pretty grim. Some of the comments on Twitter have also been pretty on the nose-

Again this could be a coincidence.

But if they wanted free press because of the date and the beginnings of people talking about them. They certainly got what they were looking for.