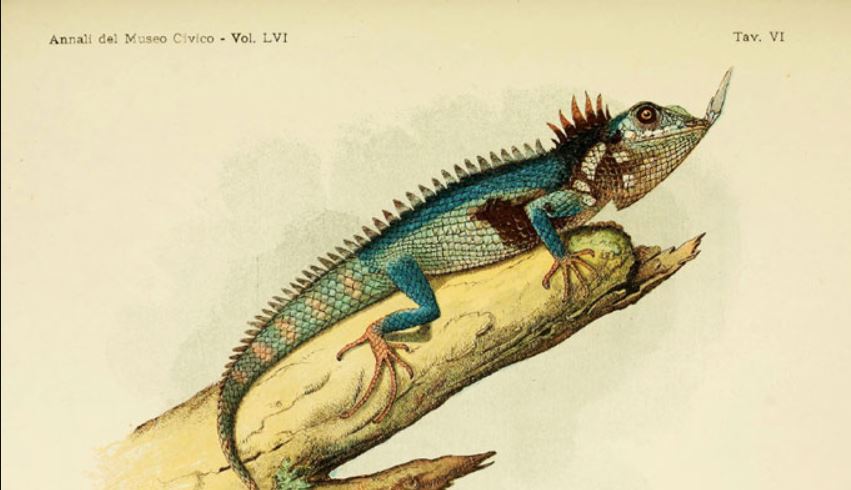 In 1891(almost 130 years ago) Eli Modigliani brought a lizard into the Natural History Museum in Genoa. He had reported that he collected the specimen from the forests of India. It would eventually become known as a Harpesaurus modiglianii. It has not really been seen since then. And it’s feature of a horn protruding from the nose would make it hard to miss. But now thanks to Chariunas Adha Putra we know that they are still alive and living in that region.

While conducting a bird survey in 2018 in the mountainous area of Lake Toba in Indonesia’s North Sumatra, Putra found something. The description he gave to herpetologist Thausun Amarasinghe was that it was, “a dead lizard with interesting morphological features, but wasn’t sure what it was.” Amarasinghe later asked the biologist to send the find to Jakarta.

Once it was transported to Jakarta they were able to identify that it was Modigliani’s lizard. Putra was then asked to go back to the area to see if there were any living lizards. Five days later Putra was able to photograph one. You can see an image of the lizard in this article by Sciencenews.org

The type of lizard is usually referred to as a dragon lizard. And this one comes from the Agamidae family of lizards. It’s cousins are Bearded dragons. Since they usually live in small hard to reach places it makes sense that they would be hard to spot.

What’s worrisome is that the discovery happened near an area where deforestation is going on. So if they want to preserve some of their natural habitat they are going to have to act fast before anything else happens to the area. Or find enough specimens and successfully relocate them to a safe area where they will thrive.

The problem with that though is since we don’t know much about the species we don’t know what they need to live or what other wildlife would be affected by them.