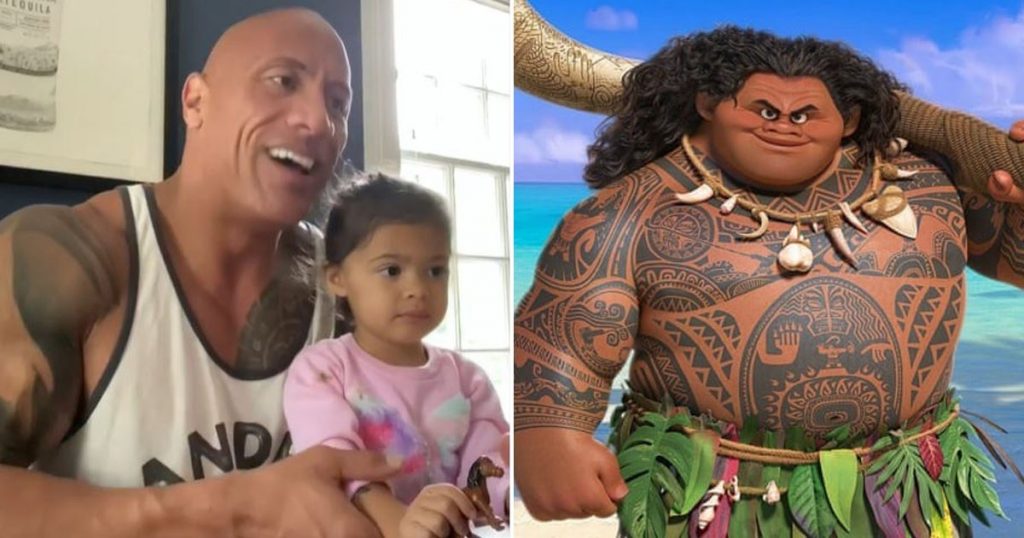 “Moana” is one of Disney’s most underrated modern classics. Despite being both critically and financially successful, it seemed to fly under a lot of radars when released in 2016. With music by songwriter darling Lin-Manuel Miranda, it has quickly risen to become a staple on many Disney+ repeated watchlists. Of course, Dwayne The Rock Johnson’s Maui is a scene stealer. Loaded with all the charm and charisma we’ve come to enjoy from The Rock, his Maui also has a pretty solid voice and nails “You’re Welcome’s” sometimes tongue twisting lyrics.

“You’re Welcome” is an easy favorite from the film, so it should come as no surprise that Johnson’s two year old daughter Tiana loves it too, even making her dad sing it to her multiple times a day. Despite this, she still doesn’t believe it’s her dad. On instagram, The Rock shared a touching video of them watching Moana together. He asks her “is Daddy Maui?” to which she definitively responds “no.” Laughing, The Rock replied, “Are you kidding? All right, do you want to see it again? For the 3000th time.”

Despite his best efforts and daily attempts over the last few months, Tiana can’t see to put them both together, and it’s adorable. Commenting on his instagram video attempt he wrote, “And for the 937th time today she wants daddy to sing along with Maui. She has no idea we’re the same person. And I have no idea what day it is anymore, but I’m sure it’s one that ends with Y.” While we’re confident Tiana will eventually grow up to understand how awesome her dad actually is, it is still heartwarming to watch her not connect the dots yet. We could all use a little lighthearted news right now, so from The Rock and Tiana, you’re welcome.