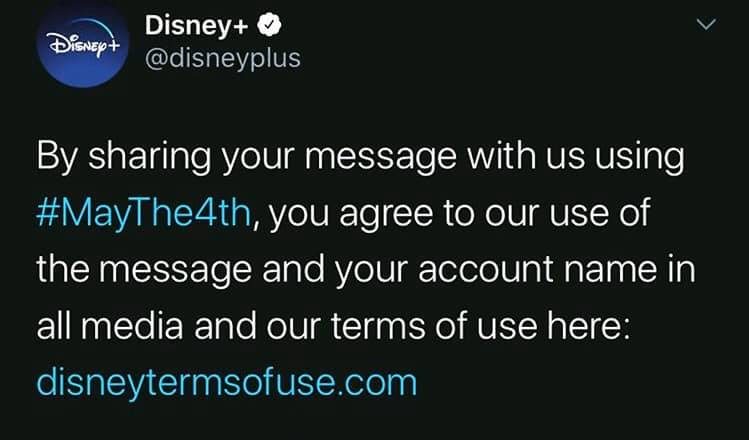 Remember when #MayThe4th was something that fans rallied around to celebrate their favorite fandom? Well that changed today when Disney+ tweeted that if you use it they can use any of your tweets in a media campaign and there is nothing you can do about it. They said that by using the hashtag you automatically agree to their terms of use. Which is a weird thing for them to do.

What that means is that if you tweet something with the hashtag and they like it, they can use it without contacting you. Which means that you may be part of a promotion somewhere and not even know it. It would be nice if they contacted you so at least you would know, and they may do that. But they absolutely don’t have to since by using that hashtag you are agreeing for them to use it.

In most instances, we do not claim ownership of your User Generated Content; however, you grant us a non-exclusive, sublicensable, irrevocable and royalty-free worldwide license under all copyrights, trademarks, patents, trade secrets, privacy and publicity rights and other intellectual property rights for the full duration of those rights to use, reproduce, transmit, print, publish, publicly display, exhibit, distribute, redistribute, copy, index, comment on, modify, transform, adapt, translate, create derivative works based upon, publicly perform, publicly communicate, make available, and otherwise exploit such User Generated Content, in whole or in part, in all media formats and channels now known or hereafter devised (including in connection with the Disney Products and on third-party websites, services, applications, and/or platforms), in any number of copies and without limit as to time, manner and frequency of use, without further notice to you, without attribution (to the extent this is not contrary to mandatory provisions of applicable law), and without the requirement of permission from or payment to you or any other person or entity. You agree that submission of User Generated Content does not establish any relationship of trust and confidence between you and us, and that you have no expectation of compensation whatsoever (except as may be specifically stated in the provisions of the Disney Products in connection with the submission, or arising from it).

Now the problem becomes what if you don’t know about this? What if you don’t follow Disney+ but just like Star Wars and use the hashtag anyway? How would you even know any of this was going on? Well the answer is you wouldn’t. And they could still use whatever you posted if they wanted to.

It does look like now they had someone on the legal team yelling at them that they couldn’t actually do that. The timestamp between the tweets in the chain go from 6h to 1h where they first tell you that using the hashtag means they can use it absolutely. To them saying OH, “The above legal language applies ONLY to replies to this tweet using #MayThe4th and mentioning @DisneyPlus. These replies may appear in something special on May the 4th!” Which is a little better and less scary than what they said initially. But it probably would have been a great idea to lead with that instead of citing their terms of use first.