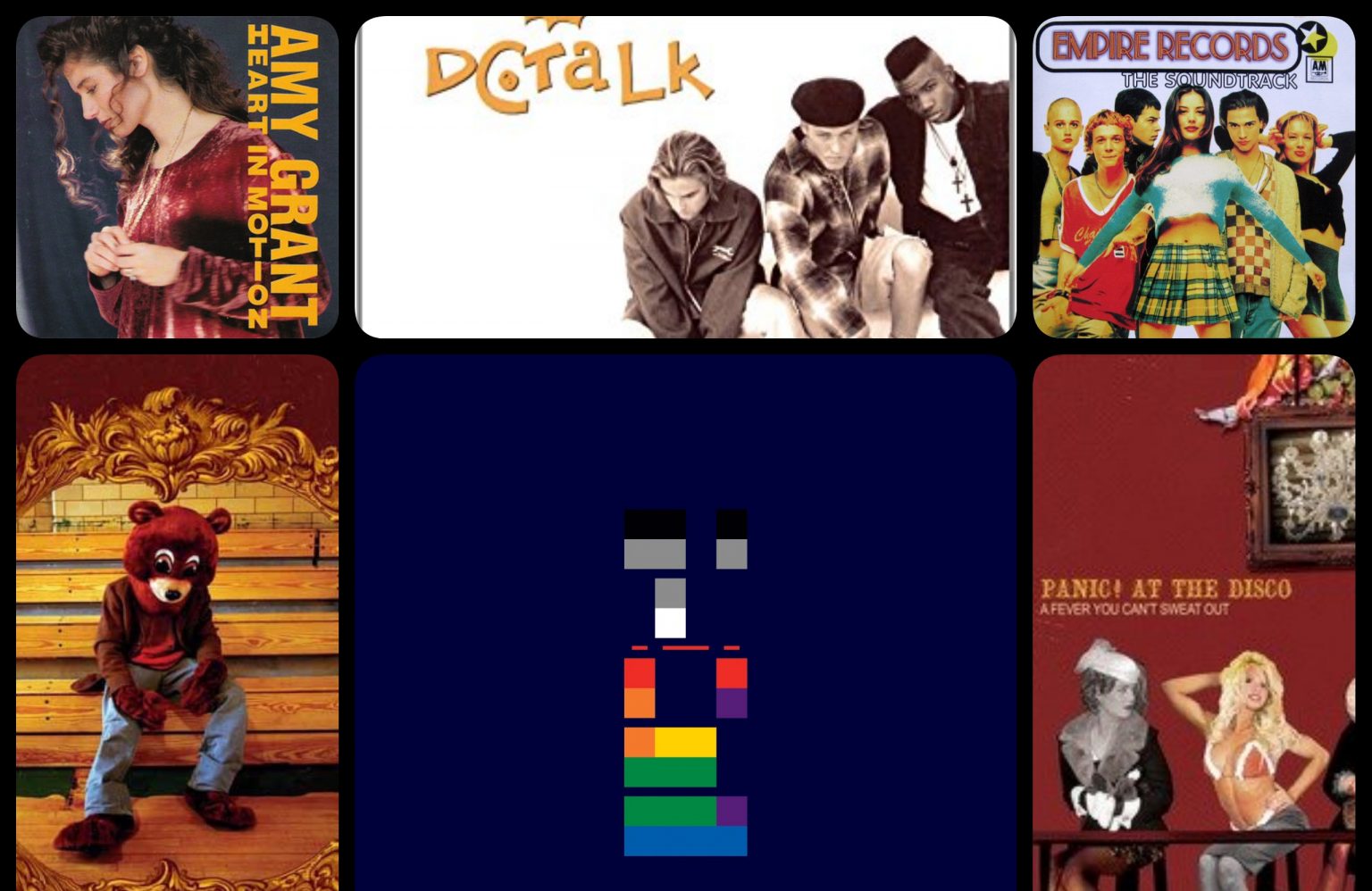 The 10 Albums Facebook Challenge: Just How Weird Are the Albums that Influence Your Taste In Music?

Fire up Facebook at any time of day and there is sure to be a challenge in your Newsfeed. From “Post a selfie and I’ll tell you what I think of you” to “Brighten my day with the 8th photo in your phone” we are constantly looking for new and albeit silly ways to connect and tag each other on the internet, now more than ever. So it should come as no surprise that the latest challenge popping up in the timeline is 10 Albums that Influenced Your Taste in Music. In this new Facebook challenge, you post 1 album cover a day then nominate someone else by tagging them to do the same, and on and on it goes, revealing just how weird our actual music selection is. The experiment reveals some of the best parts of us, recognizing the music that has defined us throughout our upbringing and sparking an almost subconscious nostalgia that may have been forgotten but is now reborn.

The actual challenge instructions are as follows: Day (enter day) of the 10 albums that greatly influenced my taste in music, nominated by (insert tag). 1 album per day for 10 consecutive days. No particular order, no explanations, no review and no apologies for what may be embarrassing. Just post the album cover every day. Then ask someone to do the same. Today, I’m nominating (enter nominee). For sake of this article, I will not be nominating anyone to participate in the challenge, but rather encourage you to do so for your own personal discovery. Likewise I will be sharing all 10 albums here as well as adding a little review and explanation as to why it made the list. Per the challenge though, they will not be in any particular order and I will offer no apologies for any of my albums.

While most of the time I spend my days hosting nerd shows swearing like a sailor and doing stand up comedy telling sex jokes for peanuts, I was actually raised as a very conservative christian. Most of my earliest memories of music are from worship bands and churches, with the occasional crossover to mainstream 90s pop like Amy Grant. A staple of the decades KOST 103.5 rotation and beloved christian artist, Heart In Motion is one of the first albums I can remember listening to with my parents and enjoying for myself. This album still has some terrific pop hits like Baby, Baby, That’s What Love is For, Every Heartbeat, and my personal favorite, Galileo.

It’s probably best to get all of the religious influence out at the start because it’s going to take a turn for the heathen quickly. Because of my upbringing as long as the album was considered Christian I had free reign to listen to it. Enter DC Talk, a rap, rock, R&B contemporary pop group that at the time would be considered edgy christian music. While the messages of love, Jesus, and abstinence aren’t the least bit subtle, the band truly understand melody. With catchy R&B hooks like That Kinda Girl, Socially Acceptable and I Don’t Want it, it’s clear the members of DC Talk truly love blending musical genres. Sure, the album is probably dated now, but when that musical rabbit hole gets me you can bet a song is being played from this album at some point.

If there was ever a soundtrack that manage to capture the sound of a decade it would be The Empire Records Soundtrack. This is not only one of my favorite movies of all time, but the album is the answer to the question “what does 90s music sound like?” With classic 90s bands like The Gin Blossoms, The Cranberries, Better Than Ezra, and Lustre (makers of the now infamous Scotty Doesn’t Know) this album truly defined how I understood contemporary rock music during the coming of age period of my childhood.

And now for something completely different: Showtunes! Growing up my best friend’s family was deeply in to musical theater, performing in multiple musicals and stage plays, myself as well. Because of this he was always up to date with the newest broadway release, and from the minute I heard La Vie Boheme I was hooked. I needed to know every single lyric to every single song and regardless of whether or not I understood what I was singing, within a summer I could do the entire show from start to finish. I could still probably do that now. Of all the musicals I love, Rent holds a special place among them.

While I have been to many raves and festivals, I have never done any drugs associated with elevating the experience. I’m a very weird anomaly who genuinely loves the music, so when I was introduced to Trance and House music for the first time, ATB Movin’ Melodies was on heavy rotation. A true innovator of the Trance sound and copied by many a deejay after him, ATB blends beautiful melodic tones with pulse pounding beats underneath. This is the kind of music you can listen to while you gaze at the stars, and with floating keyboard sounds of Til I Come, The Killer, and Don’t Stop it’s hard not to feel like you’re being taken out of this world and placed somewhere else, even without the help of mind altering drugs. This album opened up a world of music I didn’t even know existed, and until everyone else discovered drugs a few years later I was essentially alone in my love for it.

Growing up it seems I left no musical stone unturned, going from contemporary christian pop to trance to creepy, occult inspired, violence advocate hip hop. You can find all of that here on Bone Thugs and Harmony’s E. 1999, an album I had to hide under my bed because it had a parental advisory sticker on it and I was not allowed to own it. Bone Thugs are one of my all time favorite hip hip groups and if you can’t tell by now, my musical tastes are heavily melodic. Despite their dark lyrics and content, the fast past, syllable heavy, almost singing rap style mesmerized me. Add in the fact that the Crossroads music video is still one of the most iconic videos of all time and existed in a time when music videos mattered, this is the best the Bone Thugs get. Hits like First of the Month and Crossroads are probably on most 90s Hip Hop playlists, and this album opened my closed conservation christian world into unexplored territory and changed how I understood rap.

It’s hard to remember a time when Kayne West was actually a good up and coming hip hop superstar set on changing the game with his sample heavy beats and social commentary lyrics. Today he is nothing more than a punchline, which saddens me because his beginnings from producer to front man is one of my favorite hip hop stories and the artistry is never more apparent than it is on College Dropout. Say what you want about the Kanye you know today, but from College Dropout to My Beautify Dark Twisted Fantasy, he was leaving a forever stamp on hip hop. From All Falls Down to Get Em High, this album is an undeniable tour de force. It’s hard to believe now, but this album actually inspired me to begin listening to more introspective hip hop that I had known about but never invested in listening to. Artists like Talib Kwalei, Mos Def, Jurassic 5 and Dilated Peoples. He truly changed the way i viewed introspective hip hop, and while he may be in the sunken place today I’d be lying if I said he didn’t have a profound impact on my musical life.

The last 3 albums on my list all come from the same year of 2005. This was a pivotal time in my personal life as I was preparing to graduate from college and I suffered a huge unexpected loss in my immediate family. Music has an incredible way of transforming itself into the soundtrack of our lives regardless of its original intent, and in our time of need we find ways to let the sounds infiltrate us and act as a catharsis in our darkest hour. While none of the of songs on this particular album have any correlation to my experience at the time, Panic At the Disco’s A Fever You Can’t Sweat Out changed the way I viewed Pop Punk. For the longest time, bands like Fallout Boy irritated me for no other reason that it was the “cool” thing to do at the time. But this album changed all of that and while it is no different than anything FOB has done prior, the vocals of Brandon Urie and the electro pop, dance inspiring undertones got to me and I became a true fan for many years after. I even became a fan of FOB after this album, seeing them live in 2009 which is a testament to how truly influential this album was.

Still reeling from the personal turmoil I decided I should run off to India shortly after graduation for a few weeks to teach and perform hip hop dance. It is still to this day one of the best and worst experiences of my life, mainly because the trip was ill timed for such a culture shock and my fragile emotional state really wasn’t equipped to handle it. Paramore’s All We Know Is Falling was the album that soothed me and got me through. There is not real reason as to why other than it being one of the only albums I had with me at the time, but songs like Brighter, Pressure, and Here We Go Again hit me in the feels unlike anything else and I became a lifelong fan. I have seen them live at least 6 times, own every album including all of Hayley Williams’ solo tracks and their influence on my taste in music remains undeniable.

And so we come to the final album on the list, Coldplay X&Y. I could probably write a whole article on my experiences with this band over the years, but this particular album holds a special place in my heart above the rest. it may be trite, but I have the chorus of Fix You tattooed on my arm to commemorate the loss of a loved one, as well as a tattooed rose with lyrics from A Message in the stem. No band or album has ever had the influence on my life as this one has. Songs are attached to memories that will never be forgotten even if I want them to be, and there is not a track on this album that I can’t relate to an event in my life.

There you have it, my life laid bare through the window of influential albums. It is an interesting self analysis that I would encourage each of you to make even if you don’t actually do the challenge on Facebook. In these trying times, it is a healthy catharsis to look back on the music that made us who we are today. And if nothing it else, it may spark someone to say, “Hey Alexa, play Lying is the Most Fun a Girl Can Have Without Taking Her Clothes Off.”