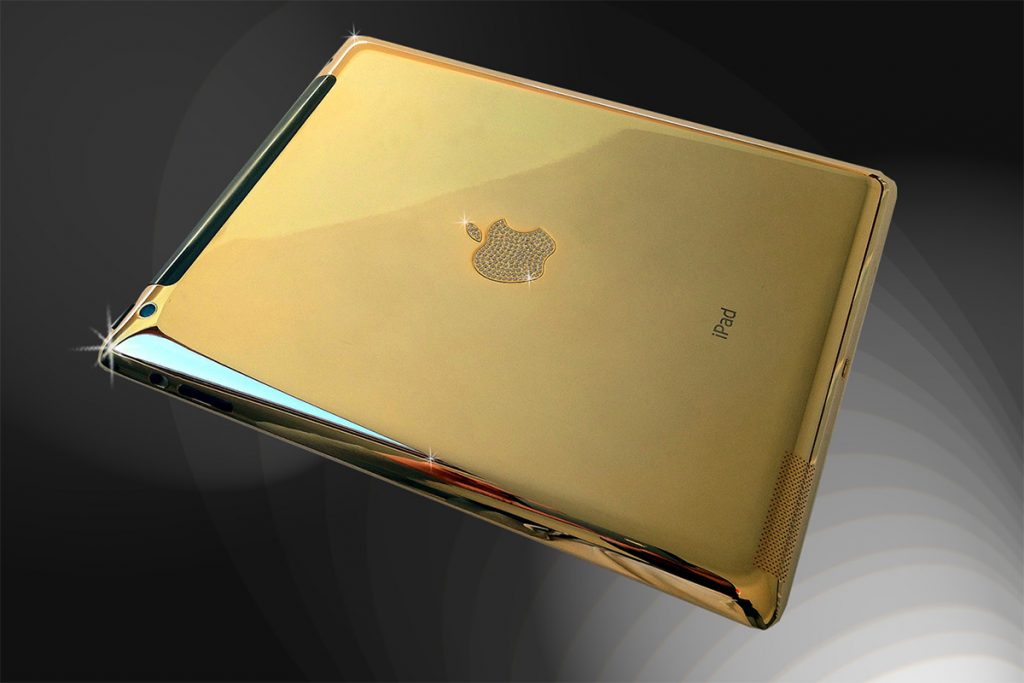 In the movie Office Space, disgruntled bank software-updater Peter Gibbons fantasizes about having $1 million. Asked by a friend what he would do with the money, Peter responds:

“Nothing. I would relax. I would sit on my ass all day. I would do nothing.”

Needless to say, that’s not how most wealthy people make use of their riches. Some buy Aston Martins, yachts, private jets, private islands. Others pay people $150 an hour to “style” their houseplants (yes, really). A few give their money away to charitable causes.

But in order to get a sense of the level of … opulence available to the so-called One Percent in the modern age, we’ve compiled a short list of ridiculously expensive gadgets that people have actually bought.

So, do you want to see how the other half spend their fortunes? Are you sure? Okay, you asked for it—don’t say we didn’t warn you.

You haven’t lived until you’ve watched Keeping Up with the Kardashians on a sparkling, diamond-studded television. Manufactured by Italian company Keymat, this $130,000 LCD TV comes standard with white gold trim and 160 real diamonds totaling 20 carats. Lest it be described—or decried?—as garish, however, the YALOS Diamond TV’s screen measures in at a humble 40 inches. Perfect for your child’s bedroom.

Studies have shown that if you place your alarm on the other side of the room, you’re less likely to press snooze and oversleep for work, having already got out of bed and walked a number of paces. Perhaps Jarre Technologies had this in mind when it designed its AeroDream One iPod dock.

It’s 11 feet tall, meaning you have to climb a ladder to reach the top and actually use it. The thing (not sure how else to describe it) is also 870 pounds and contains 10,000 watts of power. Oh, and it’s covered in chrome, because why wouldn’t it be?

Won’t fit in your house? No worries—just buy another one with bigger doors and higher ceilings.

While it’s really, really tempting to refuse to believe that anyone would pay $887,000 for a vape mod, it’s always important to face reality. This particular product was manufactured by a company called Shisha Sticks at the request of a Russian oil tycoon living in London. It’s got 246 two-carat diamonds, 46 yellow Swarovski crystals, a 24-carat gold button, and a six-carat oval diamond on the tip.

And you thought touchscreen models were silly …

Speaking of touchscreens, there exists an iPad that costs $8,000,000. No, that’s not a misprint and you’re not experiencing double vision. The price tag on the iPad 2 Gold History Edition—designed by Stuart Hughes for reasons unknown—is $8 million.

Its back is made of 24k gold. Its front is made of Ammolite—the oldest rock in the world. Its Apple logo is encrusted with 53 diamonds worth 12.5 carats. Oh, and the Ammolite is infused with pieces of a Tyrannosaurus rex thigh bone, circa … well, it’s really old.

Why would someone buy this? We were hoping you could tell us.

Some companies seem hell-bent on triggering a bloody proletarian revolution. Chopard is one of those companies. The Swiss watchmaker’s outlandish 201-Carat Watch features a grand total of 874 diamonds. We’ll spare you the specs—there are lots of different colors, shapes, and carats—and just reiterate that it leaves a $25-million dent in your checking account. Presumably it tells the time, too, but don’t quote us on that.

Millions of people around the world don’t have enough clothes? Let them wear diamonds!