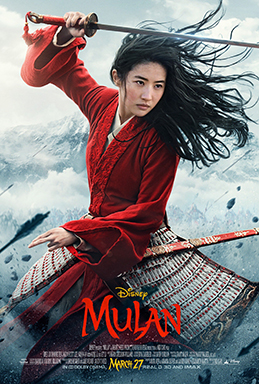 Is Disney’s ‘Mulan’ Worth the Wait?

Mulan (1998) is an animated film that sparked joy worldwide as it was one of Disney’s first animated films where the heroine wasn’t a princess in distress. When it released in the U.S. it continued Disney’s Renaissance in re-establishing itself as the powerhouse studio that it had been several decades earlier. Now Disney has moved into a new era with its live-action films which has had a mix of hits and misses. Now people are concerned which side of that spectrum Mulan’s rendition will fall on. Is it going to be any good without Mushu and its now-classic musical numbers? A simple answer is: yes.

Unlike its cartoon progenitor, Mulan is a war film that takes inspiration from the 6th century, The Ballad of Mulan. In it we have Hua Mulan who always had a strong presence, but tradition says she honors the family by marrying and being a good wife. Her father cannot go to war so she goes in his place, saves China; the Emperor is grateful, and her family retains its honor. Similar enough, right?

Without giving spoilers, let me try to give you some impressions of the new film itself: the cinematography is very poetic and symbolic. The orchestral soundtrack takes its cue inspirations from the classic music and helps create the atmosphere in different parts of the film. The cast has also done a beautiful job embodying their characters.

During a recent Q&A, Director Niki Caro and Actress Liu Yifei were able to break down some parts of why the upcoming Mulan had the changes that it did and what they keep.

Caro stated “The intimidating things was my responsibility in telling the story.” Her biggest challenge in making Mulan was:

“How to tell a story about two armies going to war, a young woman going to war, without being able to show any fighting really or blood under the Disney brand. I was really blessed that the fighting style was martial arts – wushu – being inherently beautiful. I’m proud that the battle sequences feel visceral and robust but never gratuitous.”

In the trailers we see tidbits that are a nod to the 1998 animated film such as the Matchmaker and the avalanche. Niki went on to say, “I wanted to honor [the animated film] by bringing through sequences that felt iconic. The matchmaker sequence [and] the avalanche… It wasn’t in the script when I came on so I brought it back because I felt like that was a way we could really flex our cinematic masses, visual effects, to really create a spectacular avalanche but the trick there was to try to understand how [Mulan] could be strategic enough to bring the avalanche down. In the animation it’s quite cute because it’s Mushu, it’s a little rocket, and it comes out of that kind of comedy but the thing I love about Mulan the most is how super smart she is and strategic. We spent quite a bit of time [trying] to figure out the avalanche sequence; how would she make it happen?”

We also notice there are some changes – but don’t panic. This isn’t the comedic, campy exaggeration of a Chinese legend which had offended Asia the first time around. The phoenix’s colors match Mushu’s color-scheme beautifully. Producer, Jason Reed, stated “We split Li Shang into two characters. One became Commander Tung (Donnie Yen) who serves as her surrogate father and mentor in the course of the movie. The other is Honghui (Yoson An) who is [Mulan’s] equal in the squad.” I can promise there is a love interest in the film, and it’s cute. There are not be any musical numbers, but the songs translate into orchestral themes and beautifully portray scenes. However, there are a couple of songs in the credits which you should definitely keep an ear out for. Gong Li’s character, Xian Lang, is a witch in Bori Khan’s troupe and aids him and his army into taking down the Emperor. In Chu Renhuo’s Romance of the Sui and Tang (1675) Mulan meets the opposing force’s daughter Xianniang and becomes her sworn sister. You may have noticed it does nod to all the different versions of Mulan that have been written through the centuries.

Without spoiling anything this live-action has more inspiration from ‘The Ballad of Mulan‘ than the 1998 film but still takes some inspiration to create an artistic balance between the visual and the figurative. Jet Li is an strong, stoic, badass Emperor. Gong Li sets her stage as a poetic bridge within the film. Donnie Yen does what Donnie Yen does best; be Donnie Yen. Jason Scott Lee does a terrifyingly brilliant performance as Bori Khan, the antagonist of the film.

The stunts consisted of a lot of planning through computer rendered imagery and a clever group of stunt coordinators. Simply put, the film is a must-see. I will warn you that it is rated PG-13 due to sequences of violence (it is a war movie, after all).

Mulan, originally set to release in theaters March 27th, has been delayed and new dates have not been set. But rest assured that it will be worth the wait.