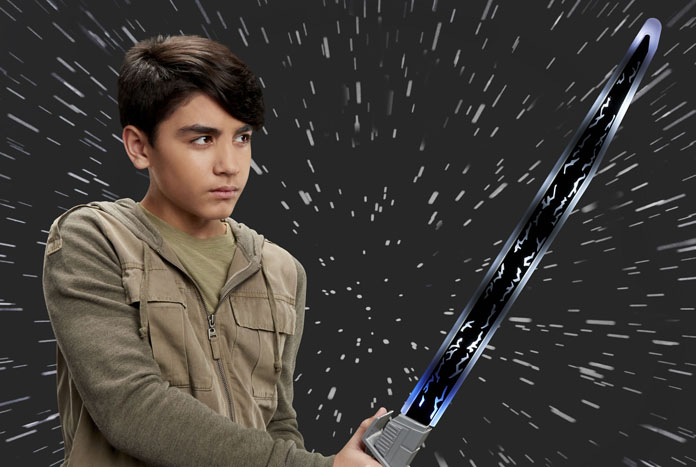 If I were to mention a Darksaber then fans of “Star Wars” (especially the “Clone Wars” and “Rebels” watchers among you) would know exactly what I’m talking about. The infamous sleek black-bladed Darksaber existed as the symbol of Mandalorian power for many generations.

“We didn’t, this was one of a kind. Legend tells that it was created over a thousand years ago by Tarre Vizsla, the first Mandalorian ever inducted into the Jedi Order. After his passing, the Jedi kept the saber in their temple. That was until members of House Vizsla snuck in and liberated it. They used the saber to unify the people and strike down those who would oppose them. At one time, they ruled all of Mandalore wielding this blade. This saber is an important symbol to that house and respected by the other clans.“

All I know about this blade is that from the second I saw it in “Star Wars: The Clone Wars,” I knew I had to have one, and I went wild when I saw it during the closing minutes of “The Mandalorian’s” season finale (whoops, sorry spoilers!). I am a sucker for design, which is probably why I am studying Theatre Design right now in college. Whoever designed it, kudos to you! I know I want one in my home as soon as possible, but for a while now it seemed like I wasn’t about to get an official one. Not that I have a problem with going through Etsy! But now it looks like Hasbro has heard my calls of sorrow, or perhaps the internet was hearing me talk again.

Behold! The infamous Darksaber! Hasbro has outdone themselves this time for sure! Just look at it! It looks like someone reached into the TV and pulled out an exact replica of it. Ah, it makes me so happy to even just see it! And the best part is, the price is not going to break the bank at all! (Because you know, starving college adult here haha)

In the STAR WARS saga, this one-of-a-kind black-bladed Lightsaber has been a symbol of MANDALORIAN power for generations. Imagine wielding a black-bladed Lightsaber with exciting electronic light and sound effects! The STAR WARS THE MANDALORIAN DARKSABER ELECTRONIC LIGHTSABER features electronic light effects, classic Lightsaber effects, awesome battle sounds when kids swing the Lightsaber, and crackling lightning sound and light effects when they hold down the button on the hilt! Imagine ruling over MANDALORE with the MANDALORIAN DARKSABER! Includes lightsaber and instructions. Requires 3 1.5V AAA batteries, included. Available at most major retailers.

Batman #90 Gets a Second Printing Before Its Release

Artist Imagines ‘The Legend of Zelda’ in Baroque Period Paintings