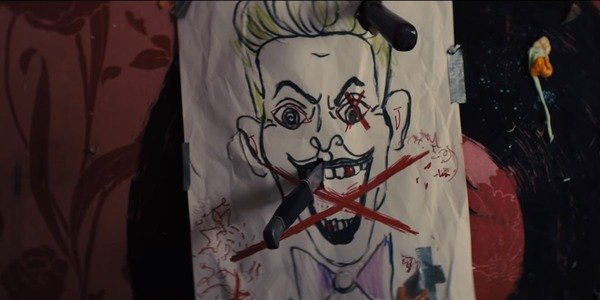 Did Birds Of Prey Officially End The Jared Leto Joker?

So I was wrong… sort of…

Last week, prior to the release of Birds Of Prey, I wrote one of those fan theory pieces hypothesizing the death of Jared Leto’s Joker in the current rendition of the DCEU. Basically I thought the part from the trailer where Harley drives a truck into Ace Chemicals and blows it to hell would’ve resulted in the long overdue conclusion to the horrendous take on the character we got from 2016’s Suicide Squad. While my article correctly identified an opening act “bring us up to speed” sequence detailing Ms. Quinn’s post-prison break escapades, the piece ultimately failed to predict its core argument… or did it?

Technically yes, the Joker is very much alive in the BoP Universe. But after seeing the movie it’s crystal clear that Warner Brothers isn’t eager to remind the public of Leto’s performance anytime soon.

What you are seeing above is a drawing from BoP that Harley throws knives at as a way of coping with her recent break up. A similar image, which I am unable to find online at this time, is used during the opening animated sequence which re-explains how Harley went from a child sold for a six pack, to college graduate, to psychiatrist, to crazed criminal force in Gotham City. Notice how there’s no silver grille or face tattoos? Notice how it looks more like how the Joker was drawn in Batman: The Animated Series than the Joker from Suicide Squad?

I believe this was brilliantly done by director Cathy Yan as a way to indirectly bury Jared Leto’s version of the character. Whether the studio endorsed her decision or not, I believe it was a great move. Leto’s doing the Morbius movie. Fans have shown zero interest in bringing him back. And if Warner Brothers is leaving the door open to recast the role, not that I think they should because Joaquin is the Joker now, they’ve set things up for a future transition.

On top of delivering an incredibly fun female led ensemble comic book movie, Birds Of Prey might have door rebooted the Joker. In all reality though, I feel it was more of a send off to the character until hopefully a much later time. If Joaquin Phoenix’s performance was anything shy of fantastic or agrees to a sequel I might say otherwise but since we’ve had three Jokers in twelve years, two of which were recognized by the Motion Picture Academy, I believe we can let the character rest for a while.

DC has all the villains in the world to choose from and if they feel they need to make one of them funny, I’d recommend turning to Cathy Yan for assistance. The use of humor that shaped Black Mask into an evil and entertaining adversary in Birds Of Prey could easily be applied to another character. There’s no sense in having all the opportunities to be funny reserved for one single antagonist.

Cathy Yan is the new Guy Ritchie by the way…

Is it time to put the Joker on hiatus? Let Nerdbot know in the comments!!