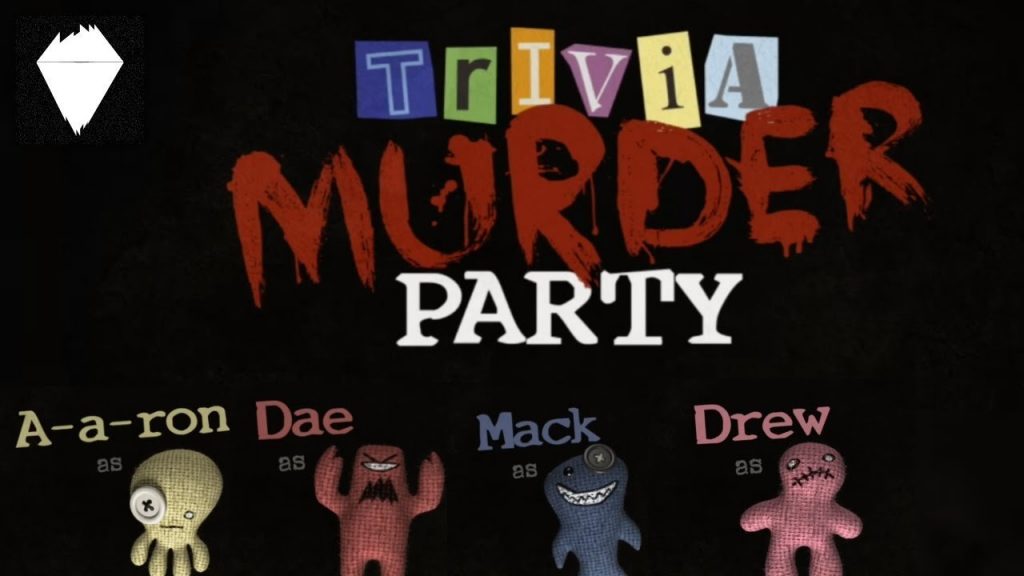 Jackbox Games’ Trivia Murder Party Is To Die For

Jackbox Games (previously Jellyvision, makers of the You Don’t Know Jack trivia series) has come up with some more techie games for those who don’t want to play old-fashioned board games. Party Packs including a set of games can be bought for a variety of digital platforms (but be careful, they aren’t transferable across platforms). Some individual game versions are also available. You don’t need to be too tech-savvy to enjoy the games (heck, even my 85-year-old mom gets a kick out of playing). And you may be able to post some game highlights to social media.

Launch the Party Pack on your TV (or wherever) and select the particular game you want to play. Players can compete with the room code provided and a device with a web browser – a cell phone, tablet, laptop, whatever – as a controller. Go to Jackbox.TV and input the room code to join.

Included in the games since Party Pack 3 is our family favorite – Trivia Murder Party! Most Jackbox games you want to get the most money/points you can in order to win, but in Trivia Murder Party you also want to stay alive. Up to 8 players can select an avatar to play, but many others can also participate as an audience member and may have a chance to influence the outcome of the game. As you can guess, Trivia Murder Party is primarily a trivia game that is hosted by a sarcastic serial killer who walks you through the game and presents the various questions and challenges, making snarky comments all the while. He may also question your intelligence depending on how poorly you do. Trivia topics can be almost anything: science, literature, pop culture, geography, food & drink, famous people…the list goes on. You better have your thinking cap on because if you miss a question it could cost you your life. But maybe you will get lucky….

Players who pick the wrong answer to a question get sent to the Killing Floor. There they may face a mini-challenge. Challenges vary – they could be a memory test of a pattern or group of objects, a challenge to create the longest word from a jumble of letters or complete the most math equations in the time allowed (ugh, math), or the challenge may be completely luck based and your life may depend on the spin of a wheel or the roll of some dice. Sometimes other players get to take part, such as when they get to poison some cups and you are forced to pick one to drink, hoping you don’t get a poison one.

Whatever it is, lose the challenge and you lose your life! But that doesn’t mean the game is over for you. You can continue to play as a ghost. When only one player is left alive, everyone goes to the final round of questions where you have to escape before the darkness consumes you. If you can catch up to the current sole survivor you can steal their life. The first person to make it out the door keeps their life and all the money they have won along the way; everyone else…they’re history.  But don’t tune out too quickly, the credits will reveal some humorous causes of death for those players who didn’t escape as well as some amusing jokes and names as the credits roll. You then have a chance to redeem yourself and play again as the same monster characters (junior version for the next generation) or restart with new avatars.

Some other games available in party packs or as a standalone include:

FIBBAGE: In Fibbage players submit a fake answer to an obscure trivia question, hoping to fool the other players when it comes time to select the right answer.

QUIPLASH: In Quiplash, players are divided into sets of two and those players face off against each other by answering a prompt. The remaining players then get to vote on the best/funniest answer of the pair. Gameplay rotates through the pairs.

GUESSPIONAGE: In Guesspionage real people were asked a variety of questions, and you have to decide what percentage of responders answered the poll a certain way. Other players can vote if they think your guess is higher or lower than the actual score. Gameplay rotates through with each player getting to guess a percentage.

SPLIT THE ROOM: In Split the Room you are given a weird hypothetical situation in which you have to fill in a blank, hopefully with an answer that will split the other players into two groups based on their response to the now complete question.

SURVIVE THE INTERNET: In Survive the Internet, you are asked to reply to a question. Your out-of-context answer is sent to another player, who tries to make something funny out of it.

The above list isn’t everything, just some of the more popular ones (at least with my family). Although Trivia Murder Party remains our favorite, I guess because we are rather bloodthirsty. (It can’t be our trivia skills, because those are somewhat lacking. I think one game we actually all died by the second question, to the consternation of our killer host.) So the next time you are planning a get-together or have family visiting for the holidays, consider if this would be a good way to have some fun.

Jackbox Games can be found here.