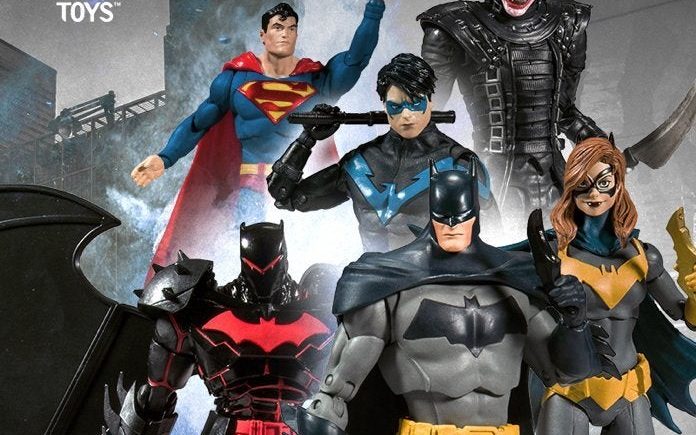 Back in February of 2019, we learned that McFarlane toys would be stepping up to the plate to take over for the DC 7″ to 12″ line of action figures, because Mattel lost the license for the collectors line. We’ve had some sneak peaks and teases since, however McFarlane Toys, DC Comics and Warner Bros. have finally revealed the first wave of figures coming soon! Let’s take a look.

Putting the “Action” in “Action Figures

All of these figures come with a stand, and some include accessories. Those without accessories being armored Superman and Batman. These two however include extending, poseable wings (some assembly required). The Bat-Raptor fits 7″ DC figures, and includes a telescoping front end to extend to it a full 12″. Interesting to note that The Batman Who Laughs, Batgirl and Nightwing are part of a set that includes “collect to build” parts for the Batmobile. You won’t want to miss out on these three!

The first wave launches pre orders today, expecting to show up on store shelves sometime this month, January 2020. Expect to find these at major retailers like Target, Walmart, Gamestop, Amazon and even Walgreens.

Which of these are your favorite? All of them? None? I’m personally a HUGE fan of the Batman Who Laughs and the Sean Murphy design for Batgirl (Loved The White Knight!).