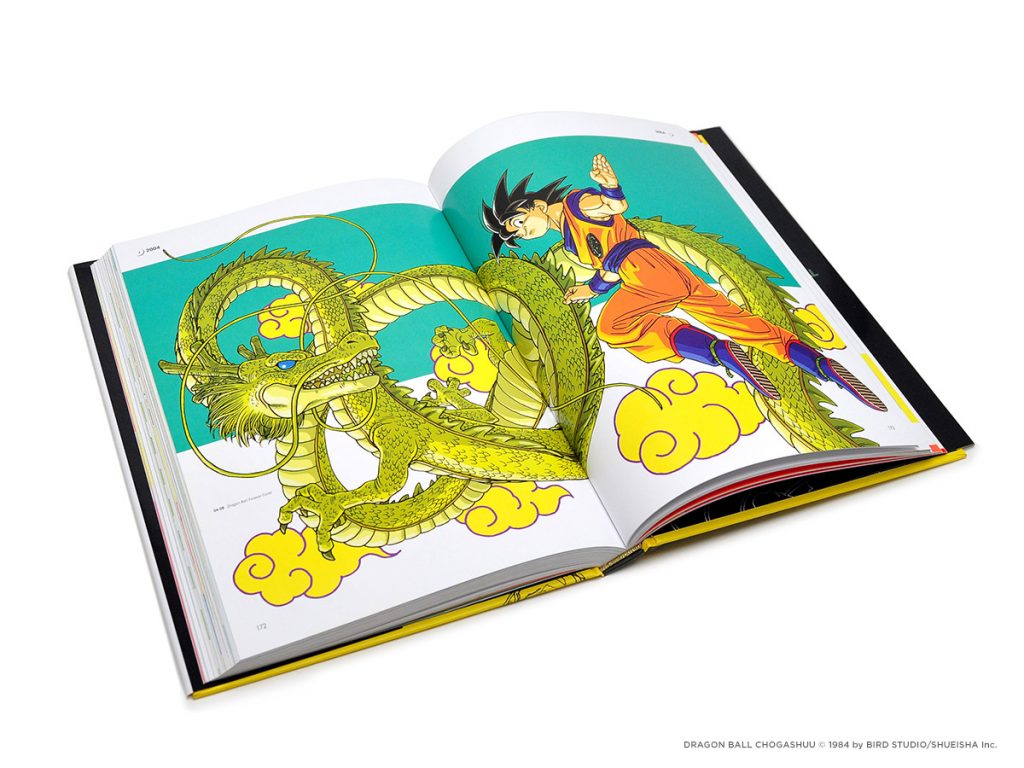 It’s no secret that the Dragon Ball franchise has become an icon in the anime world. Breaking mainstream barriers and getting people of all walks of life to tune into the latest episodes. This should come as no surprise since it’s been around long before I was even alive, going way back to 1985. 34 long years this anime has been around and has been constantly breaking records and coming out with more and more artwork. So it shouldn’t be a surprise that Akira Toriyama would release an art book here and there to showcase the work he’s done.

Before getting into the book itself the outside of it honestly is breathtaking. It has a outside cover with goku ready to shoot a kamehameha at you. And inside the outside cover is a bunch of characters throughout the show. And the book itself has a paper cover with goku talking to bulma as a kid from Dragon ball with an adult goku looking over them. With the title of the book written on the cover and the backside has goku flying at you. And the actual book cover itself has a bunch of sketches of DBZ moments on the front and one on the back as well.

If you’re a diehard Dragon Ball fan I can’t recommend this book highly enough. It truly is a work of art. (No pun intended) Because not only do you see the start of everything but you also see Toriyama’s progression and improvement in his art. Seeing art going back to dragon ball brought a smile on my face Because it helped reminded me why I feel in love with this franchises to begin with.

It brings back all kinds of nostalgia with every picture that’s displayed in the book. You can see almost all of the drawings come to life. It’s almost impossible not to smile as you flip through every page showing off something new. Not to mention seeing all the hard work that went into making this franchise so iconic made me appreciate it so much more.

With so much history jam packed into one large some I found myself discovering new things about Toriyama as well. I knew a lot of drawings he’d done in the past but there were a lot of stuff that he’d had done that I had no clue about. Or just seeing how much ad placement he had done on certain drawings due to its popularity.

Another thing that I found really enjoyable was the editor notes spread across the book from start to finish. You really get an idea of what kind of man Toriyama really is. And that is a big dork which is awesome. A lot of times he’ll give you a sarcastic response to why he loves one piece of work more than the other. Or sometimes even saying I don’t even remember doing this but people seem to love it. Seeing all these kinds of responses throughout the book was probably one of the best parts about it because everytime you see one. You’d expect a deep answer but more than likely he’s just having fun with you stringing you along.

To go further off that near the end of the book he has a bunch of his favorite interviews in the past .Which was a nice touch to get even more of an insight into this genius mind. Some of the answers in the interview too might surprise you so they’re differently worth the read.

With all that being said the book is a must have for dragon ball fans everywhere! From start to finish it’s pure joy and hard to put down. The drawings are nothing less than great. The ediotr notes are a fun read and getting to know Toriyama more from this book was great. The book is out now and you can get it on Viz.com for $34.99(USD)

For all of my visual people out there here is a short reel to give you a better understanding of this amazing book.