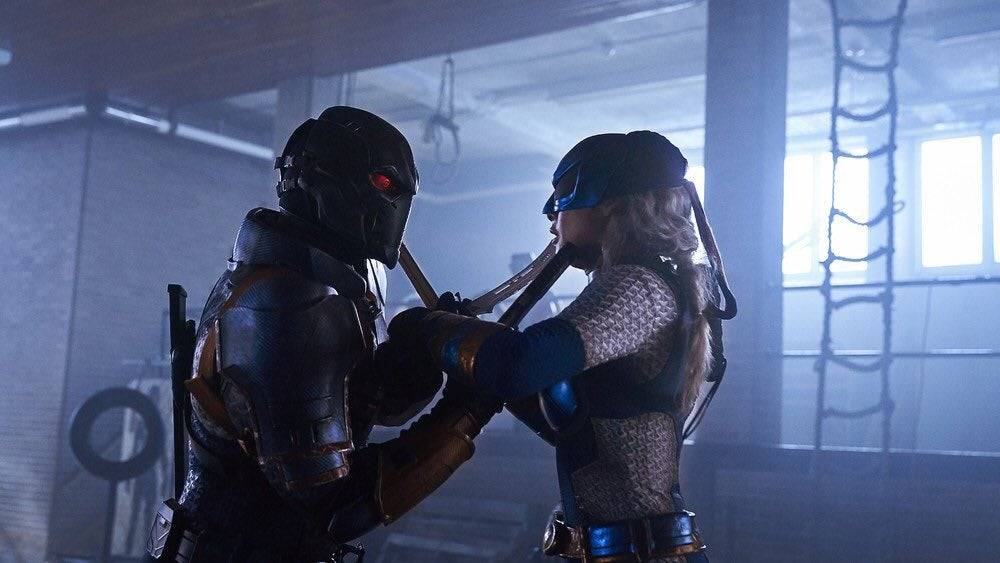 It’s episode 12 the second season of DCU Titans, “Faux-Hawk”. Can the team rally together at the last hour, in order to take down Cadmus and Deathstroke ? Lets find out.

Mercy plans to attack a carnival after having Garfield unleash his powers o people in public. Donna and Dawn find out where cadmus is, and make plans to free Garfield and Conner. Unable to find Dick, Kory and Rachel go to join the other team to help with the Cadmus issue.

Adeline Tells Dick of Deathstroke’s plans and asks him to help save Jericho , prompting him to grab new gear and costume inspired by his new Nightwing persona.

In Wyoming Hank struggles with drug abuse and becomes a cage fighter. Meanwhile, Rose tells Jason of her previous involvement( betrayal) with her father and he leaves her. Said father calls upon her service as the Titans gathered, a request she denies.

The denial of his wrongdoings and his own Hubris has made really made Deathstroke a fantastic villain. It’s a shame though that it took so long to get to upcoming climax, but its paid off well. Now whether or not he ever evolves as a person, doesn’t really matter now, but the manipulative sociopath he is now, serves the story well.

The dramatic scenes between characters are splendidly done, especially between Curran Walters and Chelsea Zhang. It seems that the writers know who can pull of really dramatic moments, and hopefully they can focus on said characters more.

The horror of Cadmus and their control of Garfield and Connor really helps to establish them as legitimate villains.

Dick transition to Nightwing is the crux of this season, which is a shame because the rode to the title has been boring, bumpy and taken way to long. So when he does show up in the season finale, there’s a lot riding on not only Dicks actions, but his own self actualization.

Honestly, who knows. Hopefully we get some cool fight scenes, and nobody with loose plot threads dies. And if they do, Dick won’t blame himself because if he does then that goes against any sort of growth he had during the entirety of the season.

‘The Walking Dead’ Will Return February 2020