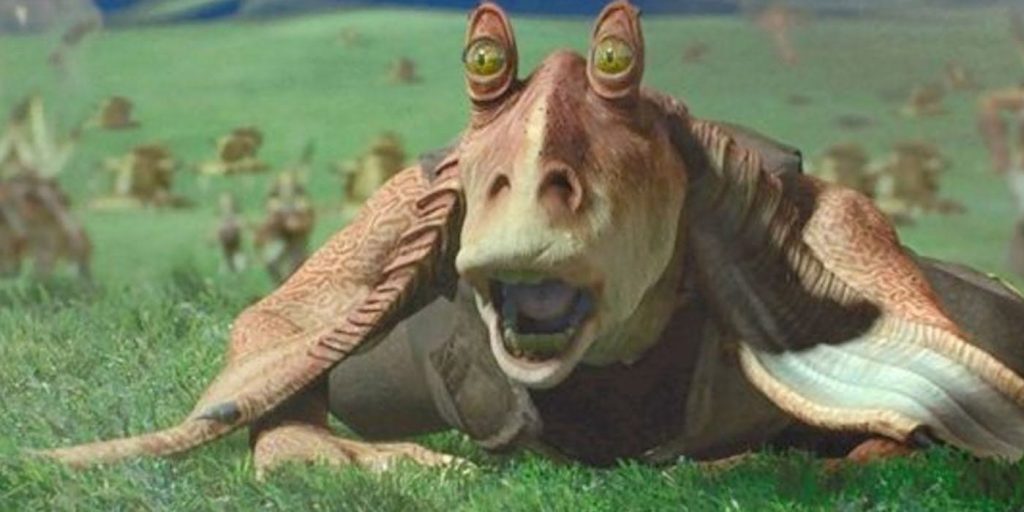 We are on the the last leg of the latest Star Wars Trilogy and not one mention of Jar-Jar Binks has been made. Fans speculated and revitalized the Binks-Sith theory as “The Force Awakens” debuted. Outside of that , the distance between us and Jar-Jar grows ever long.

And that actually creates more continuity problems than it solves.

The entire lifespan of Anakan Skywalker aka Darth Vader spans across 6 films not including various adventures in the Clone Wars series.  And Jar-Jar was there for at least HALF of that! After befriending Obi-Wan and Qui-Gon-Jinn, he bravely aids them through their journey both on and off the planet. Ultimately leading the Jedi Anakan Skywalker. Fullfilling a long awaited force prophecy.

Helping Jedi Makes Him A Fugative

The term “Rebel Scum” exists for a reason. Being caught working with, or indirectly with the Rebels, Jedi, or anyone else in the negative eyes of the Sith… and the later Sith-Controlled-Republic, automatically makes you a fugitive. You can bet any trooper or bounty hunter would notice a 7ft tall Gungan with a loud nasally accent hanging out with a couple of Jedi!

This includes leading him to aforementioned Anakan Skywalker in his youth. The two Jedi he aids in Phantom Menace.

And, I almost forgot, the freaking Senate..

Some how, Jar-Jar survived the entire ordeal on Naboo. Avoided being labeled a fugitive throughout the galaxy. And landed one of the cushiest jobs in the solar system.

Used his power of mass persuasion to give emergency powers to Chancellor Palpatine, thus setting in motion the greatest scheme the Sith ever enacted, resulting in the mass deaths of Jedi and innocent civilians across the galaxy.

Star Wars is no stranger to plot holes and inconsistencies. Part of this lore’s attractive continuity stems from the efforts of its creators correcting errors along the way and ultimately making a positive result.

But Jar-Jar never got that kind of redemption.

With only one movie left to go, its doubtful any kind of role Jar-Jar’s past actions could play in the current saga. With all these massive contributions to the storyline, you’d think a Gungan could get some damn closure around here.

Here’s to being the only person writing about Jar-Jar Binks in 2019.