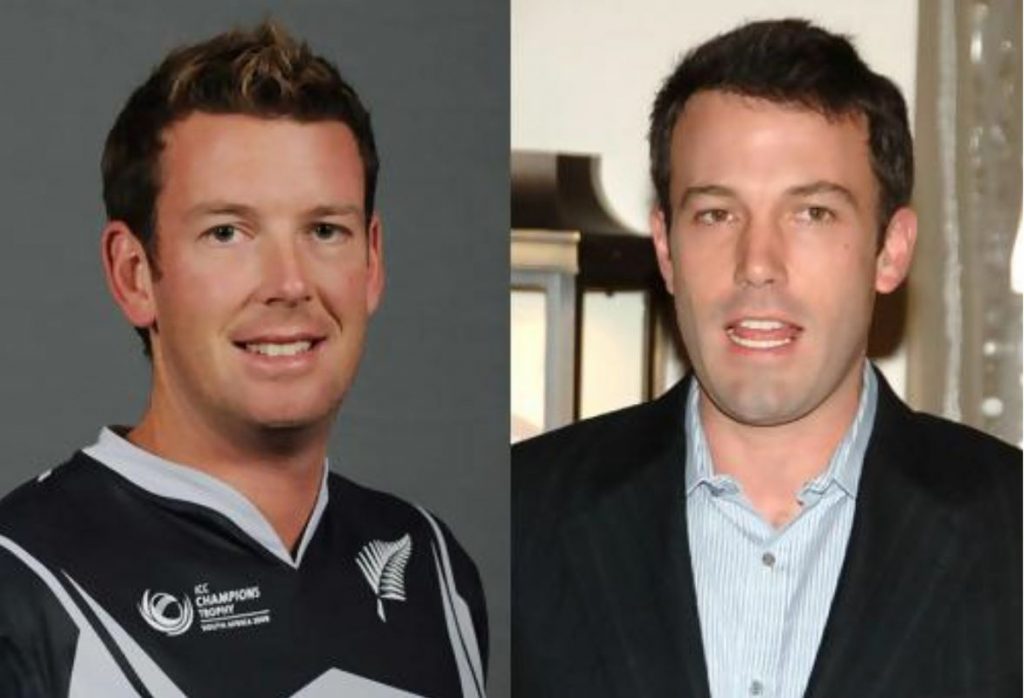 Cricketers are no less than superstars nowadays. Some of them are even better than models and actors; in terms of good looks and personality. However, there are doppelgangers among the celebrities. Today, we bring some most fantastic look-alikes of cricketers from the world of Hollywood.

Famous English actor Dominic Cooper, who played the role of young Howard Stark in Captain America: The First Avenger looks like Virat Kohli, the captain of Indian Cricket team. Right now, Virat is considered as the best batsmen of all three formats while Dominic has appeared in over thirty films and has been nominated for various awards.

We have not seen Ian Butler for a long time playing for New Zealand, because he hanged his boots in 2014. However, have represented his team in all the three formats since he was seventeen.

Ben Affleck is a popular actor, writer, director and producer who has appeared in more than 50 films. As an actor and director, he has received esteemed awards like BAFTA, Golden Globe Award, Producers Guild Award, and Academy Award. The resemblance between these two is quite remarkable.

Henry Cavill, our Kryptonian superhero and England previous test Captain Alastair Cook, has some unavoidable face match. Imagine, Mr. Cook in a white and blue uniform, and you will understand what we are trying to say here.

Not to forget that Alastair is the youngest player from England to complete 12, 000 test runs has the highest number of test runs from the English team. Henry has a huge fan following after some of his blockbuster films like Man of Steel, Justice League and Mission Impossible – Fallout. He has won best MTV movie award once for best actor.

Nowadays only seen in IPL, Abraham Benjamin de Villiers aka A.B. Villiers is considered as one of the greatest cricket players, due to his exceptional batting skills and fielding abilities. In his cricketing carrier of 15 years, he was thrice named as ICC player of the year.

Jason Statham is an English actor and producer who mostly appear as an antagonist in action thrillers. He performs all his fight scenes and stunts without a body double. It looks like both of them has the same set of hair, which is no hair. Moreover, their forehead and eyes also have a striking resemblance.

These two brand leaders share similar eyes and smile. Even their first name shares three of their letters. Daniel uses the advanced weapon to destroy villains while Dale is himself a weapon for his team.

Dale Steyn is regarded as one of the best pace bowlers of all time. He can bowl at more than 150 km/h and is also capable of hitting boundaries when required. Daniel Craig is the face of James Bond, since Casino Royale released in 2006, followed by Quantum of Solace, Skyfall and Spectre.

Part of the England cricket team that won the World Cup 2019, Johny Bairstow is wicketkeeper and right-handed batsmen. He is the only wicket keeper with a record of nice dismissals twice in the test matches. Rupert Grint is an English actor and producer who took all the limelight after portraying Ron Weasley in Harry Potter series.

Due to their eyes and smile, both of these individuals share a striking resemblance. If Rupert start spending some more time at the gym and adds some protein shakes to his diet plan for three months, he can be Bairstow. What do you say?

Whether its Adam Gilchrist is saving a match or Matthew Perry portraying Chandler in the famous Sitcom FRIENDS. Both can entertain you for the evening. However, you must have noticed that they have similar facial features.

Along with the hit television series, Perry also appeared in seventeen films. He has also given his voice to a post-apocalyptic video game: Fallout. Gilchrist, as we all know, was a very attacking batsman and is regarded as one of the skillful wicket keepers. He owns the record of the fourth fastest century that also in test matches.

The Australian all-rounder Shane Watson and British actor Clive Standen has such striking resemblance, that you will be confused sometimes that whether you are looking at Watson or Standen.

Clive is very a very popular actor and has also appeared in an Indian film Namastey London where he shared the screen with Akshay Kumar and Katrina Kaif. Watson is not playing for the Australian side anymore, but he is still active in IPL under M.S. Dhoni-led Chennai Super Kings. The right-handed batsman is also a part of Quetta Gladiators, which is league team under PSL.

Popularly known as The Incredible Hulk, Mark Ruffalo is an American actor and film producer. After starring into few romantic comedies and thrillers, he gained worldwide popularity after portraying Bruce Banner Aka Hulk in the Avenger series.

Brad Hodge is an Australian coach and former right-handed batsman. He holds the record of most runs in Interstate Australian cricket. Both of them tasted the success after some struggle and shared a similar face as well as charismatic public appearance. The only face part spoiling the match is the eye color. Have a look at them yourself.

Former English cricketer and now a commentator, Michael Vaughan looks precisely like Christian bale, who is famous for his intense acting and of course, for being Batman.

Michael Vaughan served as a test captain for five years and was considered as one of the top-ranked batsmen between 2003-03 Ashes. In the same period, he was also awarded as Wisden Cricketers of the Year. Apart from saving Gotham, Bale has a reputable stake in Hollywood because of movies like The Machinist, The Prestige and The Big shot.

This post was written by Stewart Dixon, a passionate sports lover, who loves to write about any form of sports especially cricket, football, boxing, tennis, and basketball etc.