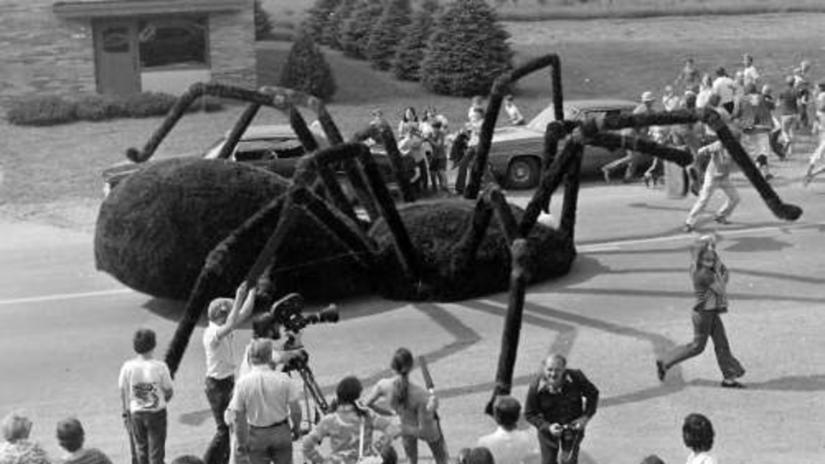 “The Giant Spider Invasion” Crawls Into Theaters as a RiffTrax Event

Who knew a giant spider invasion could be so hilarious? The guys at RiffTrax, of course! A classic MST3K movie, The Giant Spider Invasion will now be the subject of a RiffTrax event on August 15 (live riffing) and August 20 (encore presentation). Tickets and showings available at Fathom Events.

The 1975 film The Giant Spider Invasion was directed by Bill Rebane and was filmed over the course of 6 weeks in Wisconsin. Filming started without a script because of creative differences between Richard Huff (who had the idea for the movie) and actor Robert Easton (Dan Kester in the film). Easton was a friend of Rebane’s who had been tasked with writing the script. Rebane allegedly locked Easton in a cabin and threatened to not feed him if he didn’t produce 10-15 pages a day.

Fortunately, the cast were veterans and so one supposes were able to adapt to the unusual production. The lead actors were Steve Brodie and Barbara Hale.

Steve Brodie played Dr. J. R. Vance in the movie. Brodie had a prolific career and appeared in 79 films, mostly westerns and B-movies (like this one) and usually as a supporting actor. He did appear in the Elvis Presley films Blue Hawaii (1961) and Roustabout (1964). He also had numerous guest appearances on TV episodes, including three on Perry Mason.

Barbara Hale played Dr. Jenny Langer, a fellow scientist and the love interest of Dr. Vance in the movie. Hale is perhaps most well-known as secretary Della Street on the Perry Mason TV series, a role for which she won an Emmy in 1959. Her son actor William Katt starred with her in several Perry Mason TV movies. She did have roles in several successful movies, including her first credited appearance in Higher and Higher (1943) alongside Frank Sinatra, with whom she sang in the film. Her husband Bill Williams stars as Dutch in The Giant Spider Invasion.

They are joined by Alan Hale, Jr as Sheriff Jones in the movie. Although Hale appeared in over 200 movie and television roles, he is perhaps best remembered as Skipper on Gilligan’s Island. He also appeared in two episodes of Perry Mason.

The Giant Spider Invasion tells the story of a Giant Spider (and some other spiders) menacing a small town, which of course occurs after a meteorite crashes to Earth. The lone “giant” spider was actually a fur-covered Volkswagen that had its legs operated by crewmembers inside the car. The back of the car acted as the spider’s “face” so that its tail lights could serve as its red eyes. Some puppet spiders and some live tarantulas also make appearances. There is panic when the townspeople are confronted by the man-eating spiders until the scientists can come up with a plan to save the day.

The Giant Spider Invasion actually did fairly well when first released. It had a budget of $300,000 and made somewhere between $15-22 million (reports vary). It was featured in a season 8 episode of Mystery Science Theater 3000 in 1997, which has become one of the most popular MST3K episodes. In The Official Razzie Movie Guide, the movie is included on the list of “The 100 Most Enjoyably Bad Movies Ever Made.”

So, if you are in the mood for Giant Spiders and some laughs check out this latest RiffTrax event.