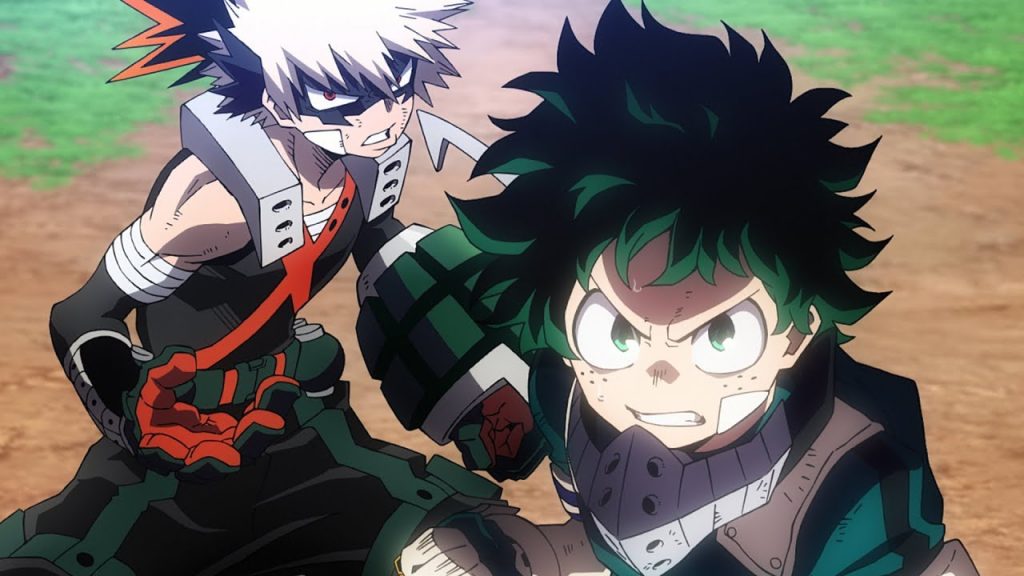 The new trailer begins with fans’ first look at the movie’s villain, Nine. Little is known about him, but he seems to have some kind of connection to All Might’s archenemy All For One. A brief shot in the trailer shows him with glowing orbs of light near his fingertips. One can assume that these orbs have something to do with his quirk. Even Nine’s outfit is a reminder of All For One- dark colors and wearing elaborate head gear.

The trailer then shows glimpses of Midoriya’s classmates. Importantly, it ends with images of a bloodied Bakugo and Midoriya. We see two hands reaching for each other. Then, we see the image of Bakugo and Midoriya standing side-by-side. It seems these two rivals will have to join forces to take down the threat of Nine. It will be the first time the two have cooperated with each other (kind of) since their exam when they had to take on All Might.

Heroes Rising is the second movie in the franchise and may very well be the last. The film is being advertised as the final chapter of the superhero story, as it includes elements of how Kohei originally intended the series to end. Whether or not the film will be My Hero Academia’s finale remains to be seen though. Volume 24 of the manga recently released on August 2nd. If the manga is any indication, there remains much of My Hero Academia that can be translated into anime form.

My Hero Academia: Heroes Rising is being released in Japan on December 20th. This means an international release can be expected at some point in early 2020. Thankfully, we will have season four of the series to tide us over until then.