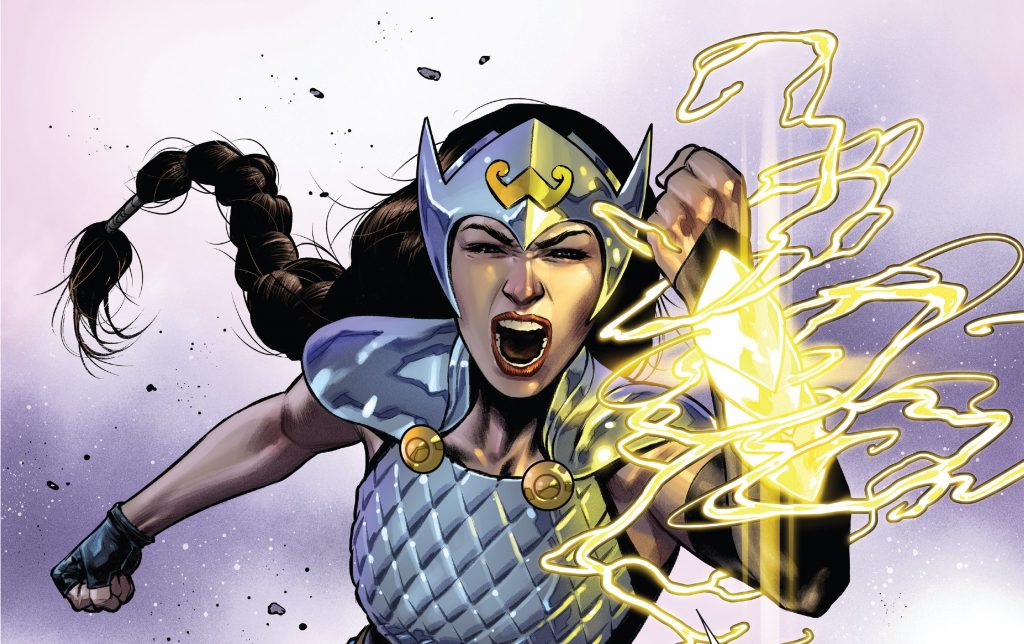 With all of the Valkyries slain, Jane Foster Takes up the mantel

Since we last saw Jane, it was at the end of War of the Realms, where the shattered pieces of the War Hammer affixed to her arm. She soon finds that her willingness to keep up the good fight, brings the Valkyrie spirit back to life. It then grants her the abilities and role of the Valkyrie.

Now wielding the Undrjarn the all weapon, this cancer free ex Thor is ready to take on the mission of the fallen warriors. To stand between the the world of the living and dead, fighting for both.

We open to Jane taking down the Rolling Robbery Crew, who are attempting to steal leftover weapons and artifacts from the aforementioned war.

Jane Rendezvous with her boss, who’s transferred her to the hospital morgue after a negative performance review.

She then goes to speak with Brunnhilde in Valhalla, where she’s urged to find a person known as Annabelle Riggs who will help her understand her new role.

She talks to Heimdall about finding their mystery person, when he is suddenly struck down by Bullseye. This concludes the issue.

The story, written by Jason Aaron and Al Ewing, kicks off a spectacular start for the character of Jane Foster. While the first issue hints at what a human/ Asgardian warrior could do, it’s not entirely specific what she should do.

A lot of what seems to be upcoming seems to be a lot of cleaning up from the War of the Realms. Since we’ve already tackled so many ideas in the Mighty Thor book, there will hopefully be a lot of interesting ideas here as well.

The artist and color artist , Cafu and Jesus Aburtov, do a great job of bring an almost oil paint aesthetic to the book. While there is a loss of vibrancy when comparing this to the main thor book, its reflective of human perspective this book has.

What did you think of this of this Issue ? Love it , hate it , or are you just not interested ? Let us know in the comments down below !