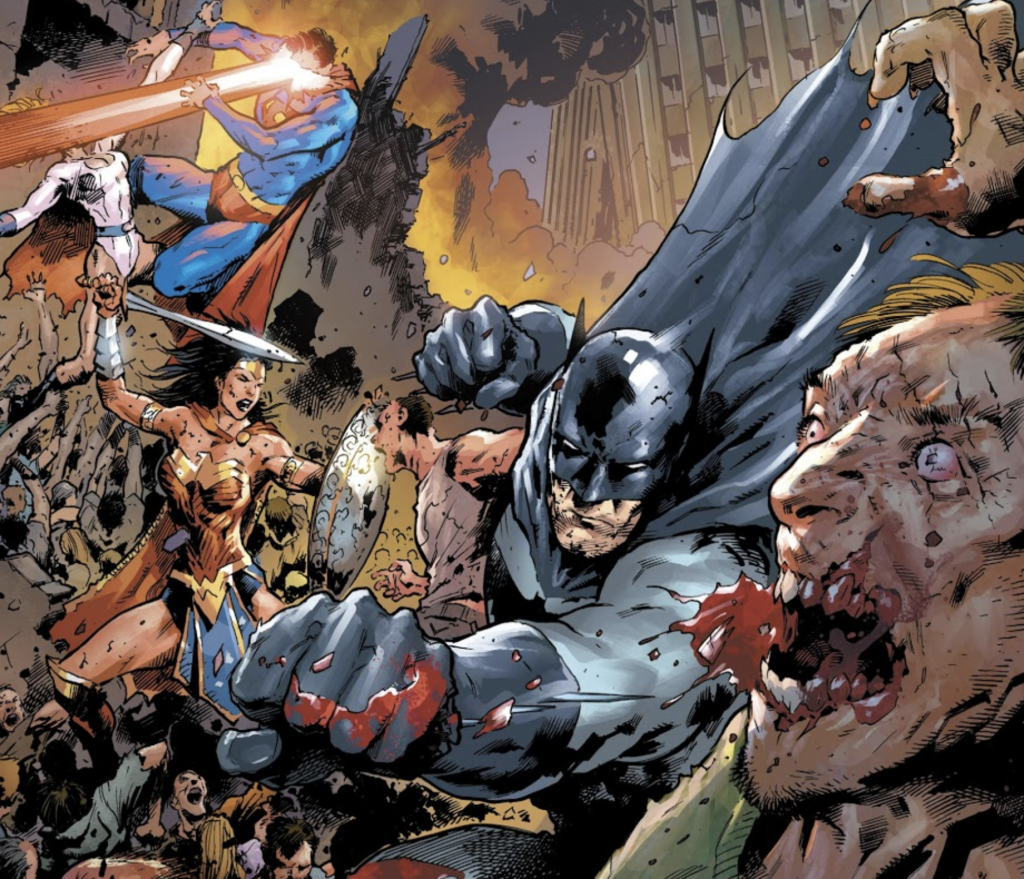 This New issue of DCeased feels like an Intermediary one, leading towards the next devastating realization this story tends to drop. We open with Alfred Pennyworth, leaving the bodies of his dead sons behind as he walks towards the unstable world festering before him .

Meanwhile, Harley Quinn’s confrontation of the Joker has gone off the rails, where she is finally lets go …. of some o her Shotgun ammo into his chest. As cathartic as it was, she has more obstacles to face as she encounters a zombified Huntress, Batgirl, Catwoman and Batwoman.

Superman starts to clear out the daily planet to use as a base. We then cut over to Mera coaching Tempest on controlling ocean tides. While we were left wondering the fate of Aquaman in the last issue, we now see him completely zombified. Unfortunately for the atlanteans, the blood is spreading through the water, instantly infecting anyone who comes in contact.

While searching , Supes Runs into Black Lighting and his kids, who were trying to knock down an infected Clayface. After giving him the rendezvous spot, Superman goes to Smallville to check on his parents.

Finding martha kent distraught, but unhurt, she tells him about Jonathan Kent’s Transformation. Unable to kill him, he seals him in the basement and takes off with Martha.

This issue was had less to do with the overall plot, and more so to do with moving pieces and hitting hard with more emotional moments. Tom Taylor continues to script these small terrifying moments which all help add to the tension of the overall narrative.

The art continues to aide in the overall terror of the situation, with jagged edges, muted coloring and fantastic facial expressions.

It’s taken three issues to cover less than an hour of this new world, and that’s fantastically terrifying. While we’ve gotten glimpses of who’s been infected, there are still so many more horrifying realizations for this book to smack us with. This book is built on the tension of knowing what’s going to happen and the fear of what could come next.

Did you read DCeased ? Love it or Hate it ? Let us know in the comments down below !