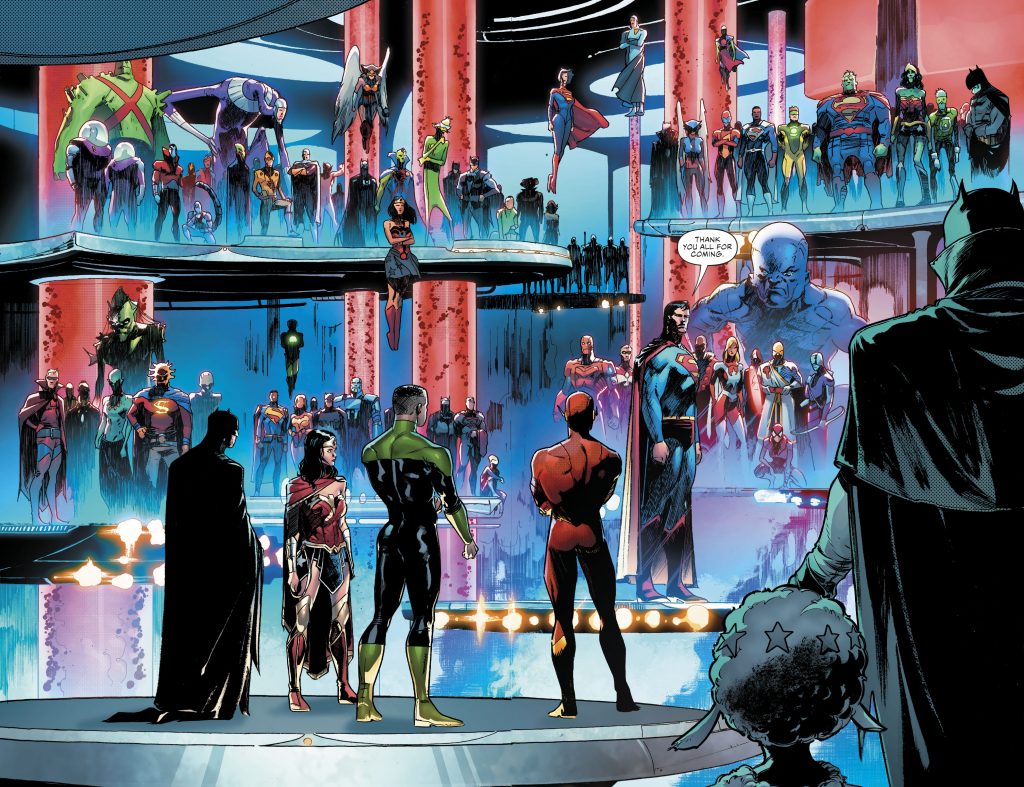 Lex Luthor is “Dead”, It’s Year of the Villain, powerful entities are making their moves, and the universe is at risk of unraveling – time for some bureaucracy !

The comic opens up with an insight into J’onn J’onzz, who’s on a search for Lex Luthor, who had died in the previous issue. The league goes to visit the House Of Heroes, a place where all heroes of the multiverse can meet and delegate on matters of existence itself.

Now here is where Superman makes his plea for unity to the multiverse , as well as introducing last arc’s villain turned ally; World Forager the son of Perpetua. He then proposed the multiverse best hope ; they need to find his two brothers the monitors.

Meanwhile, we follow Hawkwoman and Mera as they have assembled different teams of heroes to cover different stations fitted to their talents (detective groups,combat groups, science teams ect). Since the last issue/ Year of Villian #1 , the public has rejected and are starting to mistrust the league. In order to start a world wide wave of heroism, the league has recruited dozens of heroes and are starting to mobilize.

Meanwhile, new hero Starro is trying to understand and further access his connection to the first totality, but is failing.

These pages are framed by a conversation between Mera and Kendra, where Hawkgirl is worried about her role in the upcoming battles, as well as her uncertain relationship between her and J’john. We cap off the end of the issue with Martian Manhunter following the trail of who he believes to be Lex Luthor, only to end up finding Lex’s father instead.

The issue was a solid read, with Javier Fernandez bringing charm into each character. James Tynion IV has done well in this series with world building being absolutely fantastic. Each arc has built upon each other, and the story continues to grab your attention while having a lot of fun with the characters and concepts.

What’s your thoughts on this issues ? loving the run so far ? Are you going to reading Year of Villains ??