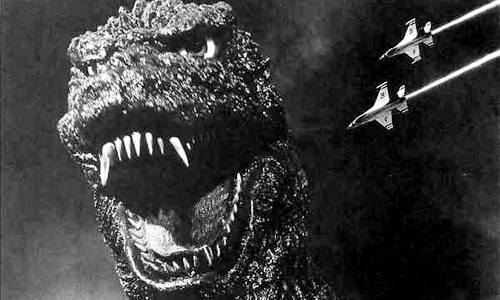 There has been a lot of activity surrounding the upcoming release of Godzilla: King of The Monsters this weekend. There were new posters for the IMAX and Dolby Cinema showings of the movie…

…and now at long last, our favorite atomic lizard has truly moved into the modern age with his own website.

The first official Godzilla website comes from the Japanese Toho Co. studio 65 years after his first appearance in Godzilla (1954). In addition to information about Godzilla and his filmography, the website has sections for news, products&events, videos, and fun stuff (like a picture of Godzilla twirling around a giant lobster aka Ebirah). Best of all, the site has a Monsterpedia with information on many of the other Kaiju in the Godzilla-verse.

“We’re thrilled to unleash a world of content around our most beloved Godzilla,” said Keiji Ota, CGO (Chief Godzilla Officer) at Toho. “Fans have been longing for a universe that celebrates the all-mighty king of monsters and Godzilla.com delivers the most exciting news and stories about upcoming events, new merchandise and special releases as we commemorate the 65th anniversary of Godzilla.”

So if you are going to see King of the Monsters and want some background on the monsters involved or if you are a Godzilla enthusiast then check out the website. While some of the newer material is sparse and focused on King of the Monsters, the site will be updated with news on upcoming films, new products, and future announcements.

You can also check out the movie-related Monarch website, which shows “declassified” research by Monarch Sciences on Godzilla and the other monsters, including possible sightings around the world. See if one has been reported near you!