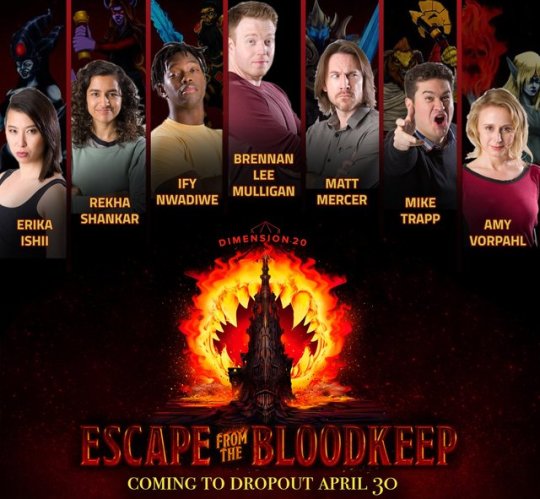 Escape From the BloodKeep – Playing as the Villains

The DnD show where you root for the Villains

Dnd has become more prevalent in the cultural space, with shows, podcasts and games trending on twitter and becoming known in the mainstream. College Humor, a Comedy Multimedia company, has produced their own RPG program : Dimension 20 – whose first show is a modern day, 80’s esq DnD show called Fantasy High.

The first “side quest” of Dimension 20 is the show Escape from the Blood Keep , a show whose protagonists are the villains.

We follow the right hand villains which serve under and evil entity that are about to take over the land and defeat. While on the cupse of their victory, their boss is taken out and they are left to pick up the pieces.

Let’s take a quick look at our cast –

And Brennan Lee Mulligan Who is the Dungeon Master for the campaign. Mulligan, who is also the DM for the aforementioned Fantasy High, and his team have created a game that subverts your expectations of who you should root for in a fantasy setting. Each player brings real emotion and relatability to their villains, something that’s needed if we as an audience are going to care about them.

While the entirety of the show is going to available on Collegehumor’s Online Subscription service Dropout, the First three episodes ( and More to come) are available on their youtube channel .

What’s your opinion on this show, and this type of entertainment in general ? let us know in the comments down below !