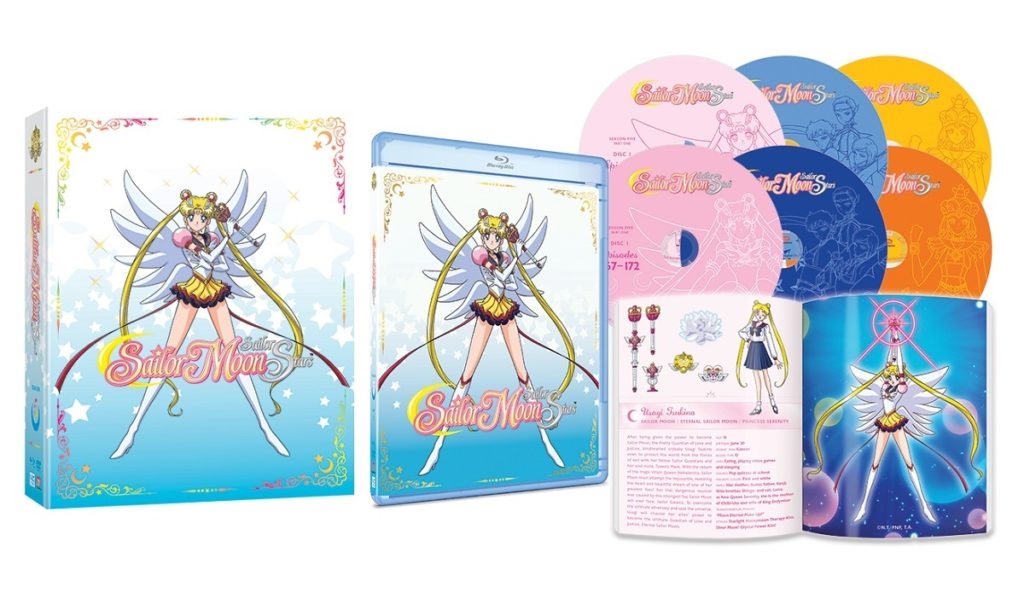 Anime and Manga Coming From VIZ in June

Viz always has some pretty exciting stuff going on. But the thing I am most looking forward to is the Sailor Stars DVD/Blu-rays that are coming out next month. Seriously it’s never been dubbed so the idea of watching it in English for the first time is mind blowing. Anyway in a press release from Viz media we hear just what we can expect next month and I have to tell you it’s pretty awesome.

Sailor Moon and the Sailor Guardians are about to face their greatest challenge yet—high school! But as the girls take their next big step in life and Chibi-Usa prepares to return to the future, a mysterious force frees the evil Queen Nehalennia! While the struggle to contain her old enemy will be difficult, it may be Mamoru’s year of studying abroad that hurts Usagi the most. But there’s even more to take Usagi’s mind off of long-distance love with the arrival of the villainous Sailor Anima Mates and the heroic Sailor Star Lights! Who could be behind this new wave of evil? And why are the Star Lights resistant to working with Sailor Moon? Usagi has her hands full, but she’ll always make time to write a love letter to her beloved Mamo.

Bored, resigned, and unfulfilled, a young man with neither name nor past survives by fighting in underground matches of a sport called “Megalobox,” a form of boxing that utilizes powered exoskeletons. Calling himself JNK.DOG, he feels trapped in a world of crime, poverty, and ecological collapse. All that changes when he has a chance encounter with Yuri, the reigning king of Megalobox. Now, obsessed with proving himself, JNK.DOG becomes a man driven to do whatever it takes to fight his way to the top of the rankings and take on the champion.

It’s the final NARUTO SHIPPUDEN box set! The Fourth Great Ninja War is over, and now the Hidden Leaf Ninja return to their daily lives. Some tackle dangerous work—like Sasuke, who tries to uncover the truth about mysterious exploding humans. Others, like Shikamaru, face the difficulty of adjusting to a post-war life. And for Naruto and Hinata, it’s wedding bells!

NEON GENESIS EVANGELION is one of the most enduring and significant touchstones for anime, manga, and pop culture fans over the past two decades, thanks to the groundbreaking television series and beautifully animated movies. This book collects ten years’ worth of illustrations that showcase the wide effect NEON GENESIS EVANGELION has left on not just the animation industry, but on popular culture in general. Included are illustrations for film posters, CD albums, bullet train designs, video game collaborations, and much, much more.

Socially anxious high school student Shoko Komi’s greatest dream is to make some friends, but everyone at school mistakes her crippling social anxiety for cool reserve. Luckily she meets Tadano, a timid wallflower who decides to step out of his comfort zone in order to help her achieve her goal of making 100 friends.

The DRAGON BALL COMPLETE BOX SET contains all 16 volumes of the original manga that kicked off the global phenomenon. Also includes an exclusive double-sided poster and collector’s booklet featuring fun DRAGON BALL trivia and guides as well as an interview with its legendary creator.

The DRAGON BALL Z COMPLETE BOX SET contains all 26 volumes of the manga that propelled the global phenomenon that started with DRAGON BALL into one of the world’s most recognizable and best-selling manga. Also includes an exclusive double-sided poster and collector’s booklet featuring fun DRAGON BALL Z trivia and guides as well as an interview with Akira Toriyama.

POKÉMON THE MOVIE: THE POWER OF US—ZERAORA’S STORY by Kemon Kawamoto

Ash and Pikachu arrive in Fula City at the start of its renowned Wind Festival and meet Margo, the mayor’s daughter, and Dr. Hawthorn, a scientist. Through the magic of Dr. Hawthorn’s virtual reality technology, our friends experience the history of the city firsthand and meet Mythical Pokémon Zeraora and Legendary Pokémon Lugia. Why did one of them fly off, never to be seen again…? And will it return in the feature film, POKÉMON THE MOVIE: THE POWER OF US?!