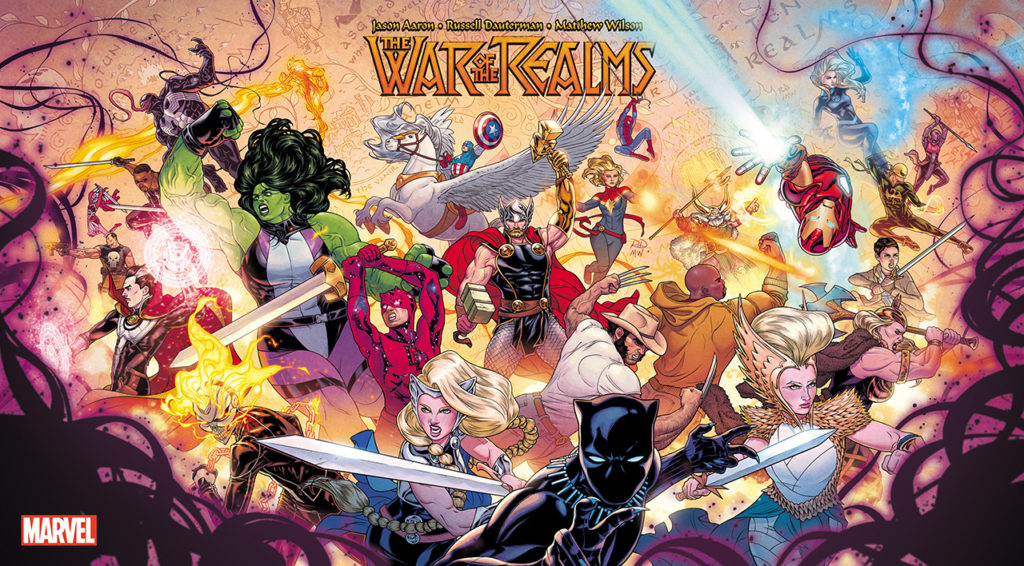 War Of The Realms Is Here

Since 2012, the foundations of a multiplane war has been lain and completed, with earth being the last place for the armies of evil to conquer ,

There hasn’t been an event in the past couple of years that has got me as excited as I am now. Civil war II ? wack, Infinity Wars ? wack, Inhumans v.s. X-men ? wack, War of the Realms ? Tight As F*ck ! This giant event has been building for six years, since the start of writer Jason Aaron’s start on the Thor Books. The official event synopsis is as follows ,

“The dark elf Malekith wages a war that has spread from one otherworldly realm to the next, setting them all ablaze, and now it’s time for that war to finally explode into the last realm standing: ours. All the worst monsters from the Ten Realms come pouring in over the globe, and it will take the biggest heroes in the Marvel Universe to stop them from conquering Earth ….”

The slew of artists and writers that have all been slowly helping this event reach its culmination has fantastically brought together the perfect rise of high action, personal stakes and the desperation needed, for such a cataclysmic event.

As seen in the Thor Books, this is the last plane of existence left that hasn’t been fully attacked by the forces of Malekith, and it’s up to our heroes to drive them back and take them down. Our opening scene is with Thor’s Father, Odin, whose idea of isolationism has left him with no kingdom, no people and no escape from the oncoming tragedy.

We then slide into Thor Odinson hanging out at the docks, which he does, who encounters a bleeding out loki and several assassins. Quickly taking care of them, he travels with Loki to go and face the leader of the enemy face on

Cutting from that we see our friendly neighborhood spiderman, help put the All-Mother and the rest of the surviving asgardians as Dark Elf assassins have begun their pre-invasion assassinations.

We then transition over to the invasion of New york, subsequently the world, and the rising heroes to combat these incoming forces.

The Avengers and Asgardians gather their forces and start duking it out, a fight that will span dozens of books, create a lot of mini series and highlight a lot of different characters.

While there has been a lot of build-up for this series, this opening issue lays the plot out clearly for any who hasn’t been keeping up. And there are some stunning pages and fight scenes drawn out. The coloring here is specific and beauty, with enough muted coloring to make certain objects stand out yet still stand with depth.

Action pages are especially a favorite, where everything is clearly ridged and defined, yet flow so smoothly on the page. Emotion is clearly imprinted on every face and action, which the combination of Aaron and Dauhtermen and Wilson are well versed in.

The Idea of this Event is incredibly interesting because, aside from the Thor Related Characters, we get to have A lot of marvel character interact with said characters mythology and world. And while there is alot to go through, it’s clear that this crossover event, that’s going to next the next month(s) or so, is going to be really filled with the fun and excitement that comes with these well done crossovers.

War of the Realms #1 – “The Last Realm Standing” (2019)written by Jason Aaron , art by Russell Dauterman & Matthew Wilson is out now !

What do you think of this event ? Hit or Miss ? Let us know down in the comments !