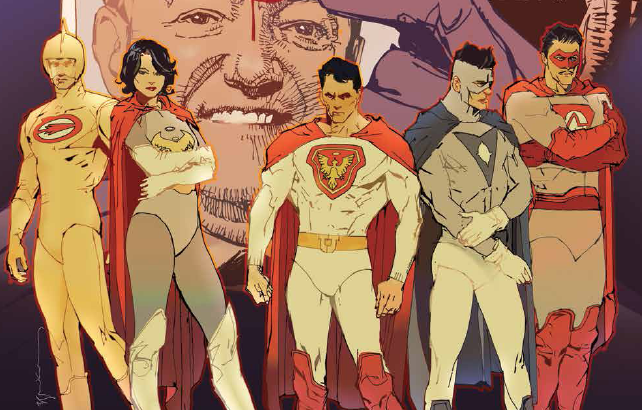 Among the first slate of series and movies based on the stories of Mark Millar and based on the graphic novels of the same name by Millar and artist Frank Quitely, Jupiter’s Legacy follows the world’s first generation of superheroes who received their powers in the 1930s. Now, in present day, they are the revered elder guard, but their superpowered children struggle to live up to the legendary feats of their parents.

Specific character details are below:

Sheldon Sampson (The Utopian) is the storied leader of the superhero team The Union. But times have changed, and he doesn’t understand the world we live in anymore. Or his own family.

Walter Sampson (Brain-Wave) is Sheldon’s older brother. A man of vast intellect and cunning who, unlike Sheldon, isn’t afraid to get his hands dirty. Or bloody.

Grace Sampson (Lady Liberty) is Sheldon’s wife and one of the most powerful heroes on the planet. She doesn’t always agree with Sheldon, but strives to balance his ideals with the reality of the modern, often violent, world they live in.

Brandon Sampson is Grace and Sheldon’s son. In training to assume the mantle of The Utopian and become the new leader of The Union, he struggles to live up to his father’s mythic legend.

Fitz Small (The Flare) is the heart and soul of The Union. Despite suffering injuries that ended his career as a superhero, he continues to be one of the most valued members of the team. And is often the only thing holding them together in the face of an increasingly hostile world.

George Hutchence (Skyfox) was Sheldon Sampson’s closest friend and ally before turning against him and the rest of his teammates in The Union. Now considered the greatest supervillain in the world, George plots his revenge on the teammates he believes betrayed him.

About Mark Millar and Millarworld

Millarworld, a subsidiary of Netflix, is an entertainment company run by Mark and Lucy Millar. Millarworld’s comic book franchises, like Wanted, Kingsman, Reborn, Empress, Kick-Ass, Jupiter’s Legacy and many others, have achieved huge success as global franchises ranging across publishing, cinema, clothing, video-games and toys over the past fourteen years. In his years at Marvel, Mark wrote some of the biggest-selling books of this generation, massively influencing the Marvel Cinematic Universe. His book, The Ultimates, was named by Time Magazine as Comic Book Of The Decade and his Superman opus, Red Son, is the best-selling Superman graphic novel of all time.

‘Red Sonja’ Put on Hold Due to Brian Singer Controversy