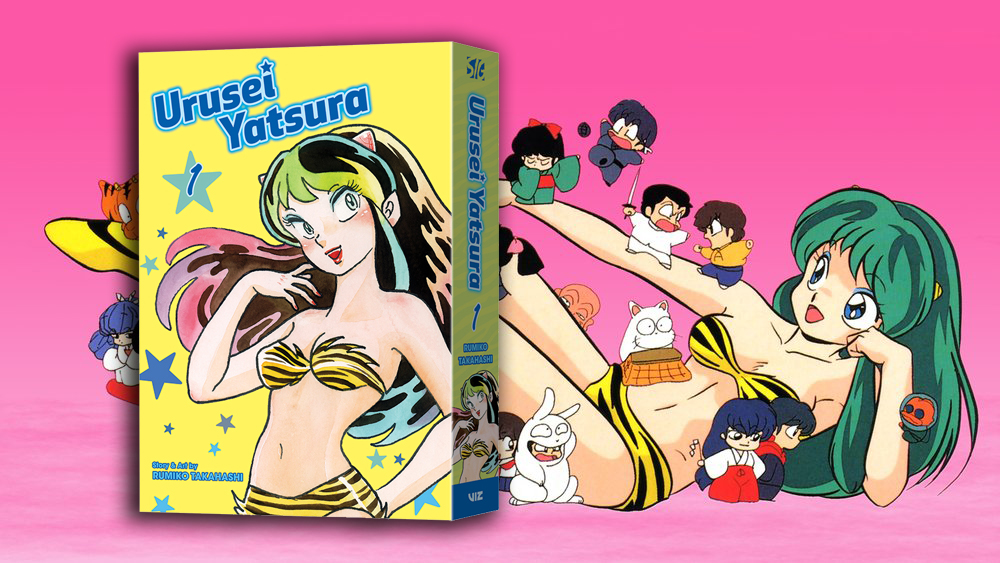 Set for publication under the VIZ Signature imprint, URUSEI YATSURA depicts the hilarious misadventures of an unlucky human boy who meets a beautiful alien princess. The series is rated ‘T+’ for Older Teens; Volume 1 will carry a print MSRP of $19.99 U.S. / $26.99 CAN. URUSEI YATSURA’s volumes will present 400 pages of content in the larger VIZ Signature trim size. The complete series is scheduled for English publication by VIZ Media on a quarterly basis.

“URUSEI YATSURA is an iconic manga series, and until now, has never been fully published in English,” says Amy Yu, Editor. “Our new VIZ Signature editions allow readers to enjoy the complete URUSEI YATSURA for the first time ever. We hope new and veteran manga fans will add this legendary series to their collections!”

The spotlight on Rumiko Takahashi’s career began in 1978 when she won an honorable mention in Shogakukan’s prestigious New Comic Artist Contest for Those Selfish Aliens. Later that same year, her boy-meets-alien comedy series, URUSEI YATSURA, was serialized in Weekly Shonen Sunday. This phenomenally successful manga series was adapted into anime format and spawned a TV series and half a dozen theatrical-release movies, all incredibly popular in their own right. Takahashi followed up the success of her debut series with one blockbuster hit after another—MAISON IKKOKU ran from 1980 to 1987, RANMA 1/2 from 1987 to 1996, and INUYASHA from 1996 to 2008. Other notable works include MERMAID SAGA, RUMIC THEATER, ONE-POUND GOSPEL, and RIN-NE.

Takahashi was inducted into the Will Eisner Comic Awards Hall of Fame in 2018. She won the prestigious Shogakukan Manga Award twice in her career, once for Urusei Yatsura in 1981 and the second time for Inuyasha in 2002. A majority of the Takahashi canon has been adapted into other media such as anime, live-action TV series, and film. Takahashi’s manga, as well as the other formats her work has been adapted into, have continued to delight generations of fans around the world. Distinguished by her wonderfully endearing characters, Takahashi’s work adeptly incorporates a wide variety of elements such as comedy, romance, fantasy, and martial arts. While her series are difficult to pin down into one simple genre, the signature style she has created has come to be known as the “Rumic World.” Rumiko Takahashi is an artist who truly represents the very best from the world of manga.

For more information on URUSEI YATSURA and other Rumiko Takahashi anime and manga titles distributed and published by VIZ Media, please visit viz.com.

Established in 1986, VIZ Media is the premier company in the fields of publishing, animation distribution, and global entertainment licensing. Along with its popular digital magazine WEEKLY SHONEN JUMP and blockbuster properties like NARUTO, DRAGON BALL, SAILOR MOON, and POKÉMON, VIZ Media offers an extensive library of titles and original content in a wide variety of book and video formats, as well as through official licensed merchandise. Owned by three of Japan’s largest publishing and entertainment companies, Shueisha Inc., Shogakukan Inc., and Shogakukan-Shueisha Productions, Co., Ltd., VIZ Media is dedicated to bringing the best titles for English-speaking audiences worldwide.