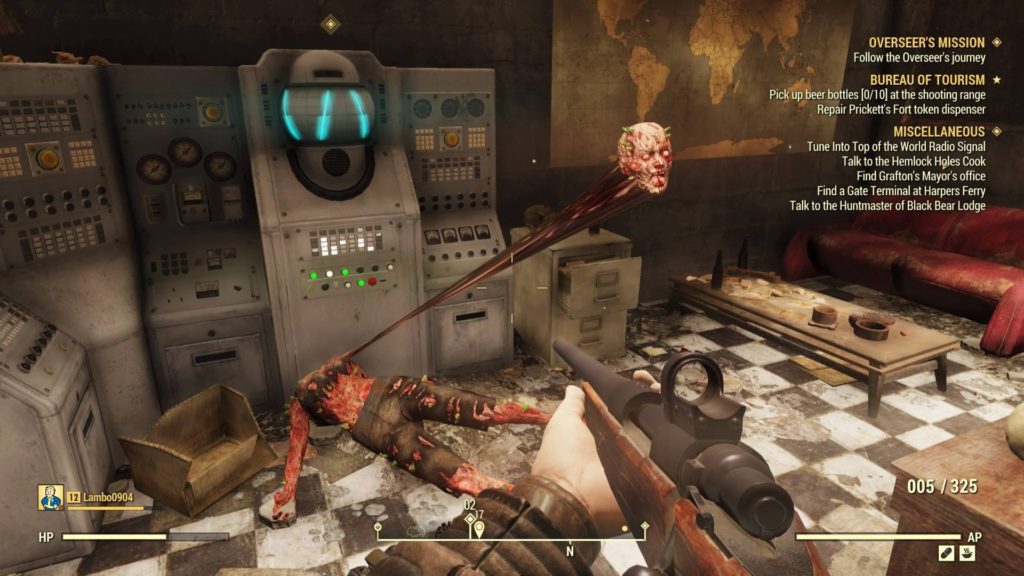 Your first view our of Vault 76
Gaming

Fallout 76: Impressions From a Vault Dweller

Rejoice fellow vault 76 dwellers because Reclamation Day is finally upon us! After a long and emotionally conflicted wait, Fallout 76 launched on November 14th. Fans of the franchise may want to wait a bit before exploring the wilds of West Virginia though, as Bethesda has a lot of work to do before this game can live up to its potential.

So, let’s start with some of the positives. As someone who typically prefers single player adventures, Bethesda has found a way to make exploring the nuclear wasteland with friends truly enjoyable. Joining your friend’s server is as easy as sliding the main menu over to your friends list, finding someone online and selecting join. Once you are there, simply invite them to your team on the social menu and you can head off into the irradiated forests together. All members of your team can simultaneously complete their quests, as the game creates duplicates of any items you need to pick up that matches the number of team mates you have. If you get sick of tagging along with your friends, many of the daily quests will give you an opportunity to split up and enjoy some solitary time.

The post-apocalyptic world of West Virginia is filled with breathtaking scenery and a multitude of new creatures to meet. Giant sloths, hermit crabs, giant many-eyed toads, and rabid-looking opposums are just a few of the new creatures you will tangle with as you explore the wasteland. Bethesda makes it easy to create your own story, as quests are easily activated through listening to holotapes or reading documents. I never once felt like the word was empty despite there being no human NPCs. Don’t be afraid to approach strangers and interact with them either, as I have had a generally positive experience with other online players. Maybe they will send you an emote, want to trade, or even invite you to tag along on their journey. 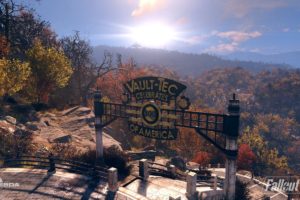 For all the good of this game though, there is some bad and downright ugly to be found  (and i’m not talking about the radtoads). It becomes obvious fairly quickly into game play that Bethesda’s beta test may have been too close to release for anyone’s comfort. This game likes to lag frequently, particularly when you are running for long distances or transferring materials in your C.A.M.P. At one point, my game lagged so badly that my character eventually froze in place. I had to close the application and restart. Ten minutes before that, my significant other’s game completely crashed and had to be restarted. There are a lot of interesting bugs as well. On multiple occasions I have killed enemies and they remained standing up, lootable but frozen in place. Many times I have glanced over at my team mates to find them gliding above the ground instead of walking on it.

The most frustrating aspect of Fallout 76 though is the fact that there are quests you can’t even complete. Early on in the main story, there is a side quest called Bureau of Tourism. The quest asks you to travel to various locations and fix different aspects of tourist attractions to make them more alluring. One of the tasks you must complete is to “repair Prickett’s Fort token dispenser,” except you will quickly discover that the dispenser does not actually exist in the game. You can see it, but there is no interact prompt and you can literally walk into the dispenser. Sometimes enemies seem not to exist at all either, as I have found multiple enemies frozen and unable to take damage despite them having a health bar. It is a frustrating break with gameplay immersion.

When all is said and done though, I still truly love the world that Bethesda has created with Fallout 76. There is so much to do and multiplayer allows players to experience the world of Fallout in a new and refreshing way. Perhaps wait a few weeks to play 76, enjoy some Spyro or Pokemon Let’s go in the meantime. I truly believe that with time and some serious elbow grease on the part of Bethesda, this game will shine like originally intended.

How have you been enjoying Fallout 76? Let Nerdbot know in the comments!