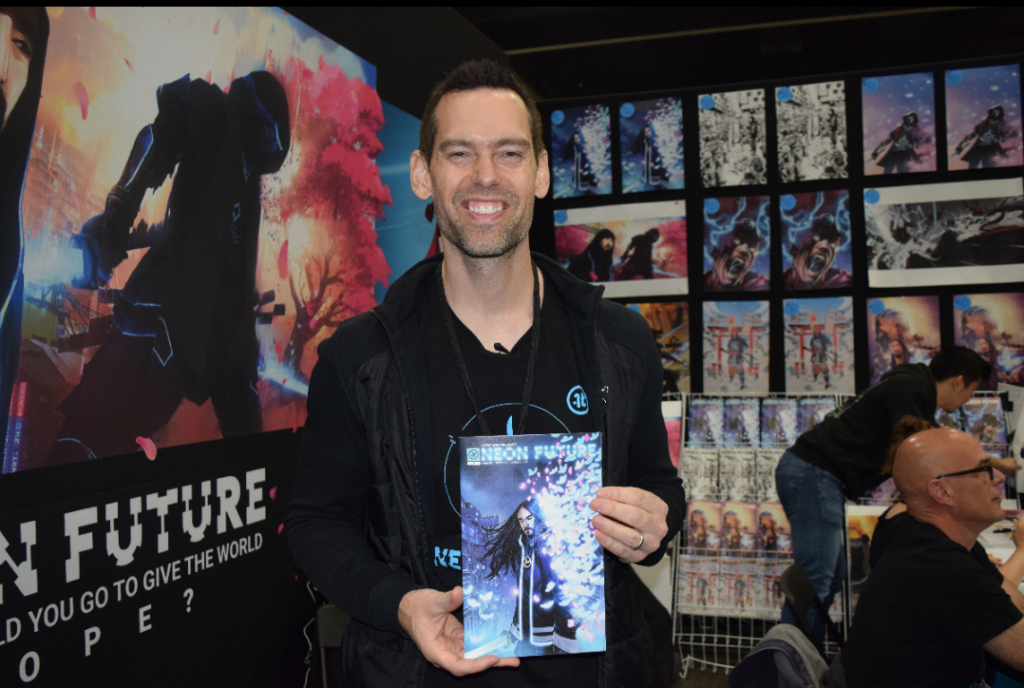 Steve Aoki is mainly known for his music, which isn’t a bad thing at all. Aoki is a talented man who has a huge following, but lately he’s been branching and exploring new routes. This new route is something geeks love; that being comic books. He’s teamed up with a publisher called Impact Theory and together they’re working on a sci-fi/cyberpunk themed comic book series titled Neon Future.

I had the luxury of sitting down with Tom Bilyeu the founder of Impact Theory and co-creator of Neon Future. Bilyeu gave an amazing insight on the comic and a lot of behind the scenes of it. The way this came to life was because Bilyeu pitched Aoki the idea. It was something that came pretty easy.

“I approached Steve- he’s like minded to me, very techno optimistic and I thought it’d be a lot of fun to tell a really great story based around his album series”.

It takes place in a dystopia tech based world. Where there are two kinds of people, one where they have technology implanted in them. Or the others which are traditional people much like you and I. Bilyeu didn’t want to tell your typical dystopian story where you escape but one where you live together.

“There are so many dystopian stories that are about you know defeating the machines defeating A.I and we wanted to tell a different story. Could we find a third way where technology and humanity live in harmony together.”

Aoki isn’t the first artist to make a comic at all. One notable artist that did this and is doing it successfully is The Weekend. Which is a very galaxy based comic called “Star Boy”. And that gave them even more hope that Neon Future would succeed as well.

One of the biggest things you’ll notice about this comic is of course the art, which has to be good in order to get anyone’s attention and they are successful in doing so. It’s very eastern and true to Aoki. Impact Theory had did some fantastic work by finding an incredibly talented artist to do this as well. Even getting people who have worked for both Marvel and DC to help.

“We have worked with one of the most legendary artist working today who’s from South Korea a guy who’s named Kim Jung Gi.”

The team has been pretty much on the same page from the start. As busy as Aoki is, he makes time to meet with Impact Theory. To get the ball rolling he’s been the key part in all of this. While he had the ideas the team put it all together.

One great thing about this series is no matter how it is received, they are guaranteed six issues. But they do hope to go for 18 to fully complete the story over three six issue story arcs.

Bilyeu is very passionate about this project and his achievements he’s made so far. He strongly believes that it will succeed and if not he knows he’ll learn from the mistakes he made. He believes in the comic so much that they give it away for free at conventions!

“At all the cons we attend we give it away for free cause we just believe in the story. It stands on its own I don’t have to trick you into buying it.”

“If five years from now I don’t look back on Neon Future and feel a little embarrassment then I just haven’t improved.”

Bilyeu is a self made man who’s clearly worked very hard to be where he is at today. And it definitely shows.

“I took myself from scrounging the couch cushion to find enough change to put gas in my car. To building a billion dollar business.”

The only way to get these comics currently is from their website “NeonFutureComics.com”, and you can buy it as it releases. But you can download it online for free on the same website as well as a month after the issue is out. And if you want to wait for Neon Future at your local comic book store you’re going to have to wait till March 2019.

So if you find yourself with some free time do yourself a favor and read this! You won’t regret it, because it is worth the read!