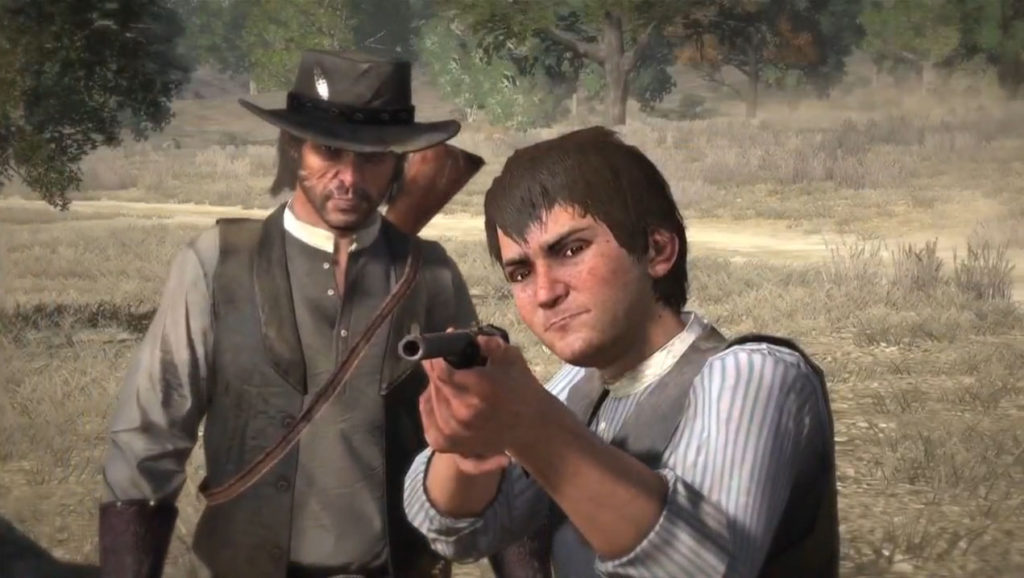 Red Dead Redemption 2 is finally upon us, releasing on Friday, October 26th. The anticipation has been through the roof for this game, especially for those who felt that the first was something special. Do you ever wonder how Red Dead Redemption did it? It would be easy to say that it’s just a Grand Theft Auto game placed in a duster and told that it didn’t have to bathe anymore. Yet, it’s so much more than that. There has never been a storyline in a GTA game that engaged my full attention the way Red Dead Redemption did.

Let’s examine why the story was so impactful. And oh boy, there are spoilers galore for the first Red Dead Redemption throughout.

On the surface, RDR is a simple western story about making amends for a life of crime. The law has caught up with our main character, John Marston, and the only way he can get his family back is to hunt down his old gang members. Sounds pretty standard. That’s a western, no doubt.

Western movies were so popular that the genre became saturated with typical tropes and archetypes to the point that they finally fell out of their long moment in the spotlight. Most of what we see now are attempts to recapture the grit of what has come before. Literally, True Grit was remade. (And a damn good remake). It’s hard to do something new in a genre that has just about every storyline conceived for it. Revenge stories? Check. Defending helpless towns? Check. The rugged loner that can’t change his ways? Check. The rugged loner that does change his ways? Check. Everything has been done. It’s The Simpsons of genres.

So we are left with one of the more popular games to come out for the PS3, and sure enough, it’s a western. You can point to the well crafted open world that feels alive. You can point to the badass gameplay that allows you to enter your deadeye quickdraw mode that makes you feel like every Clint Eastwood character ever. You can point to the slew of extra missions and tasks that give you that checklist reward feel-goodery. But a game needs more than it’s mechanics to stand out.

It’s the story itself that helps RDR become something more. And there’s one simple thing the writers and developers did that made it different than what came before: they took big risks.

Let’s recap the main plot points from the game, shall we? The first former gang cohort, Bill Williamson, is holed up in a fort that you bust into and mow down his minions with a Gatling gun. You chase him and another gang member, Javier Escuella, through Mexico fighting armies and blowing up a lot of stuff along the way.

In the end, it finally comes down to finding and hunting down the former gang leader, Dutch. This, you would think, would have the crazy climactic moment that video games are especially known for. A crazy boss fight, the final mission, it has to be hard, and it has to bring together everything you have done into this one moment. There’s definitely some fighting, but you corner Dutch on a cliff where you watch a man who has been on the run all his life finally give up and throw himself off said cliff.

You don’t even get to kill the “final boss.” You are left with questions and some emptiness, but you get your family back. It’s what this was all about right? The U.S. Government lets you go back home where your wife and kid are already getting back to standard life.

This is where things go way different than I expected. You then live out your normal rancher life. You, the outlaw turned government-sponsored bounty hunter, herd cattle and make your living out from the side quests and odd jobs you did earlier. You teach your son how to hunt and scare crows away from the grain.

The kill count for John Marston at this point is through the roof. God only knows how many Wilhelm screaming bad guys have been left in your literal dust. I mean, you can probably check the stats in the main menu, but I digress. It’s a lot to be sure.

The game takes a chance and lets you enjoy the reward of your hard work. This is what you have been fighting for and dammit you are gonna have dialogue with your wife and win your son over again. Quest after quest this plays out. Then, when you are wondering how the hell any of this is going to wrap up, if this is really going to be the rest of the game, and your son finally seems to have some semblance of respect for you again, the game rips all of that out from under you.

It turns out the government itself can’t even keep its word (rabble rabble, politics, rabble) and the U.S. Army rushes into your farmstead, guns smoking. You do what you can to fend them off, getting your son and wife out on horseback while you distract the invaders to give them time to escape.

Then John Marston has his last stand. I remember it so vividly. You come out of the barn with a dozen armed men looking down their barrels at you, and I knew I only had one chance: dynamite. Then the game forces you into that awesome Clint Eastwood bullet time that I thought I did by accident and in a panic, I gunned down as many actual homewreckers as I could. John gets gunned down real quick, and a cutscene plays out confirming this was no accident. You the main character have been killed off.

There is a quiet moment as you take control of John’s son and the reality begins to sink in.

Stopping all the action to let you enjoy time with your family completely throws off the pace of the game. The story takes a turn that no one could have seen coming. What Zelda game has you defeat Ganon three-quarters of the way in? If you do, it’s only because Super Ganon is next. This game takes a risk to tell a story and makes you feel something in the end.

They could have easily let you go home and then had that final shootout immediately, but there would be something lost in the rush to make that happen. Sure the pace might have been maintained and the action never ending, but it would have been standard, typical, predictable. Having you live a normal life allows you to let your guard down. That’s hard to do when you are telling a story in a video game. Usually, a player is going to be on the highest alert near the end of the game. Big room, extra ammo, and health packs, oh…here comes that final boss.

Red Dead Redemption takes the time to have you track a bear and scold your son as part of its final act. I’m sure there’s some that hated that. Why fight all this time to live a boring life? Why am I playing this video game to do chores that I’m avoiding in the real world?

This is done so that you, the player, could feel something. You feel the attachment you make with your family ripped away. When John goes down, there are few moments in any other game that comes close to actually feeling that loss as a player. It made me go back and replay it all over so that I could stop right before that final mission and keep those boring side quests going.

If Red Dead Redemption 2 wants to have that same kind of impact it needs to take risks too. There needs to be a real connection to the characters in the game, and that’s done by going out of the way to make those in-game relationships happen. It’s a chance to tell a story that lingers rather than walking away saying “well, that was fun. Cool graphics”.

I want to walk away thinking about these characters days later. Give me a legacy.