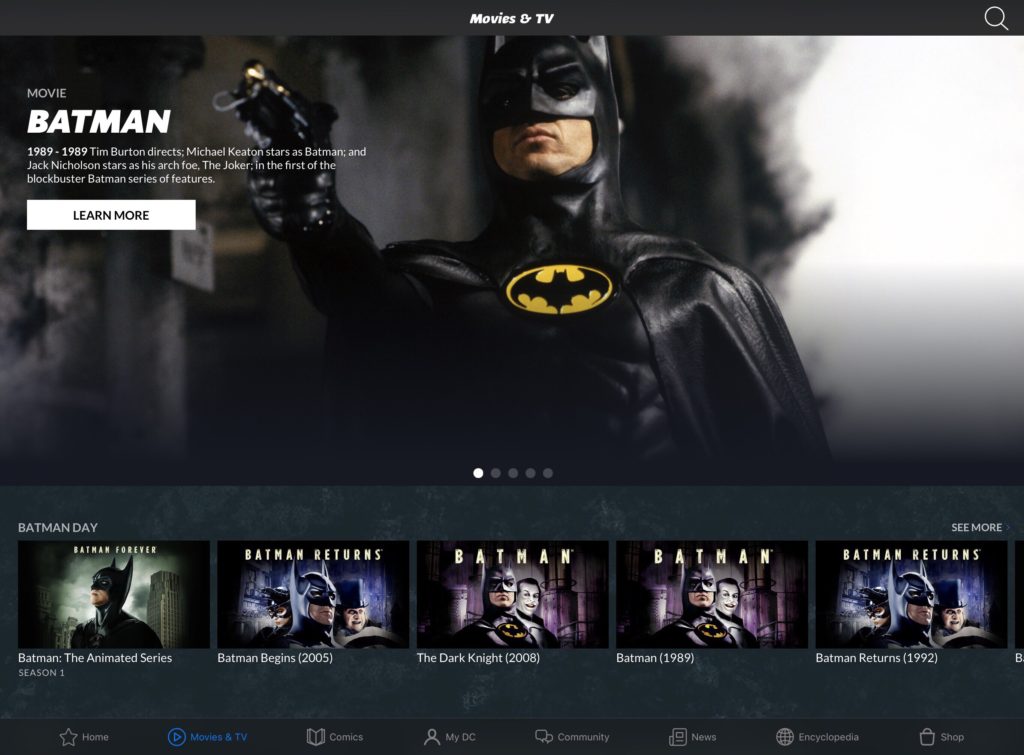 The DC Streaming Service – Is It Worth Trying Out?

Streaming services have exploded in popularity over the past decade, promising to dwarf the basic cable market in the years ahead. Made into a household name courtesy of Netflix, streaming exists in the limitless world referred to by the entertainment industry as “new media,”  AKA the internet. As scheduled programming ages into a relic of the past like the Nielsen Box and Blockbuster Video, more and more studios are looking toward the future and starting streaming services of their own. Few were surprised when Disney announced plans to create a streaming app for their content, but when news broke that DC Comics was building a “first-ever digital fan experience” app of their own nerds immediately took notice.

Initial reactions varied — some were excited about the possibilities an entire app devoted to the DC Comics Universe could offer, while others claimed DC Entertainment lacked a large enough volume of content to warrant an entire streaming network. If you were to only look at DC film and television properties made within the last several years, that may be true. But the DC Universe app includes content spanning through generations of stories; from the 40s Superman serials to 2018’s The Death of Superman. And ‘DC Universe’ offers more than just film and television, the streaming service also includes a rather extensive library of comic books available for download as well. And if even that does not sound like enough content, the app also includes daily newscasts (DC Daily), exclusive behind-the-scenes and making-of specials (DC Universe Presents), an open source encyclopedia of DC’s entire mythology, message boards, online stores, and a whole binge-tastic block of originally scripted programming. If you love DC Comics, you will at the very least want to sign up for the 7-day free trial of this app.

I was fortunate enough to be able to test out the DC Universe app at San Diego Comic-Con in their large DC Universe exhibit just outside the convention center. The exhibit featured interactive walk-throughs of their upcoming shows including Titans, Swamp Thing, Doom Patrol, Harley Quinn, and Young Justice: Outsiders as well as tablets loaded with a beta version of the app. While the DC Universe app was more or less what I expected it be, what really impressed me was its library of digital comics. It was as if they merged Netflix and Comixology into one awesome experience.

As I tinkered with the app, I asked one of the staff at the event if ‘DC Universe’ would be available on all streaming devices and the volunteer proudly proclaimed that it would. If that sounds too good to be true that’s because it is. While the app can be downloaded from Google Play and the App Store as well as be streamed via your web browser at dcuniverse.com, it is not available on the PlayStation Network, Xbox Live, or through any streaming device other than the Roku Stick. For someone like me who predominately streams through my PS4, Xbox One, and Amazon Fire TV Stick this was quite disappointing. For a streaming service that offers its own daily newscasts as well as exclusive scripted content, it seems shortsighted to not have it available on more streaming devices.

Capitalizing on Batman Day ‘DC Universe’ officially launched September 15th, though Android users were able to download the app a few days earlier on September 12th. Since the app is not available to stream through my PS4 or Xbox One I elected to first try it out on my old custom PC rig through the Chrome browser. Even though my computer is linked to the rest my entertainment system it had been ages since I used to for anything other than Photoshop or word processing because of how ancient it is.

I watched one episode of Lois & Clark: The New Adventures of Superman before getting frustrated with the bogging and quickly decided to connect my much faster MacBook directly to my television and continued on my DC binge without further issue. I also downloaded ‘DC Universe’ on my iPad and Samsung Galaxy to test out the user interface in its mobile form and found both browsing and streaming to be considerably faster.

The only show from the Arrowverse continuity that is represented in their TV lineup is the first and only season of Constantine, which was originally produced by NBC and not the CW. This leads me to believe that Netflix’s recent negotiations with the CW prevent the DC app from streaming shows they still currently have rights to, but once those rights expire ‘DC Universe’ will likely be able to add said shows to their lineup. I also noticed that neither the 60’s Batman TV series or Gotham are on the streaming service as well, but that is not surprising since those shows are owned by Fox.

As a big DC fanboy, I have to say overall that I really enjoy this streaming service. There are still some bugs and glitches that need to be worked out, mostly broken links and videos that require a couple hits of the refresh button to play properly, but a few hiccups are to be expected with any new app. My only major gripe is that I cannot stream ‘DC Universe’ through my PS4 or my Xbox One, but I’m optimistic that will eventually change. I am curious to see how quickly new comic book titles are released to their library, but for now I am looking forward to reading through the 80s run of “Teen Titans.” And speaking of, Titans will debut on ‘DC Universe’ October 12, 2018. That alone is reason enough for me to keep my subscription up for awhile.