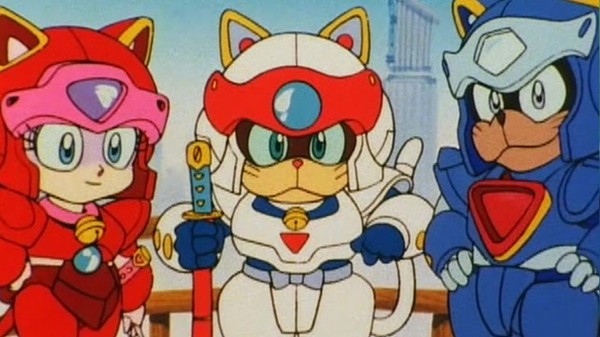 9 for 9 Lives: Counting Down the Best Cartoon Cats

This is a Nerd Voices contribution from Nerdbot reader Jonathan Meisner. You can follow him on Twitter!

I love cats. As far back as I can remember, I’ve been a cat lover and a cat owner.Sure, dogs are cool, and I’ve had a few dogs in my life as well, but there’s just something about cats that has always resonated with me. They say that cats have nine lives, so today on NerdBot let’s countdown my favorite cats across cartoon history, one life at a time. I’m certain that along with myself, the other NerdBot readers first introduction to a cartoon cat could have been Sylvester from Looney Tunes.

Poor Sylvester. Whether he was getting bashed over the head with a broom by Granny for trying to eat Tweety, Tweety was foiling Sylvester’s best laid plans himself, or he was getting beaten up by a kangaroo, Sylvester just couldn’t catch a break.

When I was 6 years old, I had my staple cartoons that I would always watch without fail like Transformers and He-Man and the Masters of the Universe.

While Thundercats wasn’t a cartoon I watched on a regular basis, I still watched it whenever I could and would pretend to be Lion-O while playing with my own Sword of Omens with a light up Eye of Thundera at the push of a button that I got for Christmas in 1986. By junior high my cartoon viewing got a little more weird. I still watched my favorites from when I was younger, but when Ren and Stimpy appeared on my tv screen, I was hooked. Ren was cool, but like this countdown states I’m a cat man. Whether he was showing off his collection of magic nose goblins, befriending Ren’s cousin Sven or appearing as a co-host on the Muddy Mudskipper show, Stimpy never failed to make me laugh. My favorite being his complete meltdown during an interview after teaming with Ren in a wrestling match. Whether he was berating Odie, doing his best to ignore Nermal, or drive Jon Arbuckle insane, Garfield has been at it for decades. I used to watch Garfield and Friends all the time in the 80’s and 90’s and every Halloween, no matter what I was doing, as soon as Garfield’s Halloween special came on after hearing that CBS Special Presentation introduction, I was glued to my tv. For as cool as Garfield was, I always identified just a little more with Heathcliff. I was always pumped to watch Heathcliff and the Catillac Cats hijinks each week. I watched Heathcliff the movie more times than I could count, and 8-year-old me thought Riff Raff’s love interest Cleo was pretty cool.

Not to mention that super catchy theme song. You know the one. It’s in your head now, isn’t it? Of course it is. By the mid 90’s, Fox Kids was my go to channel and one of the many shows I would check out when I could was Eek! the Cat.

Eek was a mild-mannered cat with a positive outlook on life and was always willing to lend a hand to those in need, with his catchphrase being, “it never hurts to help”.

Yet this would always backfire on him, and Eek would get into some sort of trouble despite having the best of intentions. Along with his girlfriend Annabelle, her guard dog Sharky, Eek’s best friend Elmo the Elk amongst others, I enjoyed Eek until it finally stopped airing in 1997.

A countdown such as this couldn’t exclude Garfield, and it can’t exclude Tigger either.

We all have our favorite character that resides in the Hundred Acre Wood, and we can relate to the characters that Christopher Robin befriends in different ways. Tigger for me was about fun, playfulness and the innocence of youth. Who among us didn’t want to bounce around like Tigger? His energy, outgoing demeanor and charm won me over from the start. For me, Tigger and Hobbes are like The Beatles vs. The Rolling Stones. Metallica vs. Guns and Roses. Which do you like better.

There really is no wrong answer (Stones, GNR, and Hobbes, thank you), it’s all a matter of personal taste. However, once my lifelong friend Perry introduced me to Calvin and Hobbes in the second grade, there was no turning back for me, I had to buy and read every Calvin and Hobbes book in existence and buy and read them all I did.

Hobbes was Calvin’s voice of reason. He was hardly successful in steering Calvin away from some sort of mischief, but he always made the effort and he was always by Calvin’s side, like a best friend would be.

It just so happened this best friend also liked to tackle Calvin out of his shoes every time he came home from school, like the homicidal psycho jungle cat that he was. I mentioned above that Fox Kids was my channel in the mid 90’s. Eek! the Cat, X-Men and Power Rangers were all shows I made the effort to watch whenever I could, when I was home to watch them, which as a teenager was rare. However, the show on Fox Kids I gravitated to the most, was Samurai Pizza Cats.

Every week Speedy Cerviche, Polly Esther and Guido Anchovy were called into action to put a stop to another hair brained scheme of Little Tokyo’s Prime Minister the Big Cheese.

The animation style, the goofy humor and that theme song stuck with me for years, and once I rediscovered the show again on YouTube earlier this year, I fell in love with it all over again.

Do you have a favorite cartoon cat that we missed? Tell Nerdbot about it in the comments!

4 Reasons ‘Phantom of the Park’ Was The KISS of Death