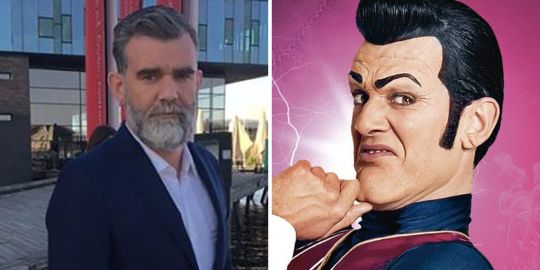 I am literally not okay right now. I’ve never written anything about a celebrity death through a veil of tears from my own blurry eyes. Typing these words will be my undoing.

Lazy Town actor Stefan Karl Stefansson died today after a two year battle with pancreatic bile-duct cancer. He was 43 years old. He leaves behind his wife and their four beautiful children.

A spokesperson for his family confirmed the sad news to TMZ, explaining he died surrounded by friends and family after succumbing to the disease. He had been diagnosed with bile duct cancer two years ago. Following his diagnosis, the 43-year-old underwent surgery which appeared to have been successful, but the cancer returned earlier this year.

He had a very successful Go Fund Me campaign that even my stingy self donated to several times. I wanted to help him. I wanted him to heal. I wanted him to be surrounded by love. Support. And let him rest and be with his family. Hell, he wanted to write a book.

All of us felt the same way about Stefan. We were cheering for him.

Revealing to his fans that the cancer was inoperable, he said in a statement in March: ‘It’s not until they tell you you’re going to die soon that you realize how short life is. Time is the most valuable thing in life because it never comes back. And whether you spend it in the arms of a loved one or alone in a prison cell, life is what you make of it. Dream big.’

Life is now. Life is NOW.

Stefan always had a smile on his face. He was loving, stood up against bullying, and made everyone know that they were special- that they mattered.

All done with chemo for now. ? #allover #happy #happyplantdad

Stefan starred as Robbie Rotten on LazyTown between 2004 and 2007 and again from 2013 to 2014. LazyTown, which originally debuted in 2004, followed the efforts of pink-haired girl Stephanie and superhero Sportacus to liven up the town and encourage its residents to lead more active lifestyles. During the Christmas season after Lazy Town, he starred as the Grinch in a stage play performance of the show. He was an amazing actor, singer, dancer and human.

One of a kind. We are Number One. You are a Pirate. Master of Disguise.

Through his characters, Stefan Karl showed me the beauty in being over the top and fun. In his heart, he showed kindness and compassion. When he announced his cancer diagnosis, just a few months after my own mother died from cancer, it tore open a wound that wasn’t finished healing.

I was watching a superhero that I knew I’d have to watch die. I knew this day would come and I didn’t want it to. Months ago, when Stefan Karl announced that his cancer had returned and it was inoperable, I cried. I wanted to write an open letter to him, but I didn’t want to make him sad in case it got tweeted to him or something. I wanted to be as strong for him as he’d been for himself, his family, and his fans.

Stefan Karl as Robbie Rotten/Glanni Glaepur gave me a rebel I could love. Someone I could cheer for in a color stained world. Sure, it was a kids’ show. And in 2005 when I was twenty years old and way too old to be watching Lazy Town, he made me laugh. He taught us to sing. To be pirates. To be ROTTEN!

I’m linking my favorite Stefan Karl moments below for anyone else who loved him as much as I did. And in typical Stefan fashion, I’m going to look on the bright side. So I thank you, Stefan, for changing my life. I loved you as much as a person can love a performer she’d never met. I knew my heart would shatter the day you died. But on the bright side that I know you’d want me to look on…

At least I don’t have to worry about you anymore. Because I did, Stefan…I truly…truly did. We all did.

You will always be Number One.