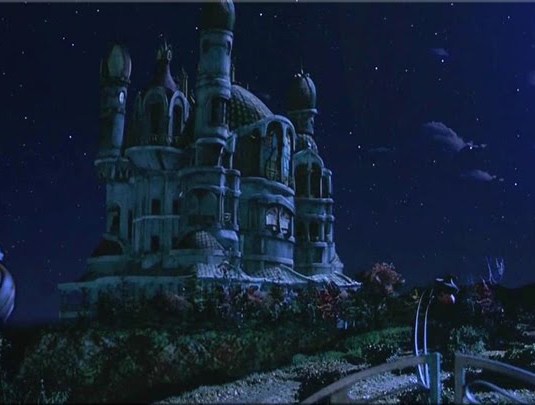 The only thing better than movies from the 1990s were the fantastical, amazing houses they took place in. Today on Nerdbot, we’re counting down the Top 5 Best Houses from 90s Movies. Pack your bags, because after you re-live these, you’re never going to want to go home.

A treasure hold, indeed. This house has everything in the world going for it. First off, it’s a mansion on the side of a cliff. That’s amazing. In terms of design, it’s just a phenomenal looking house. Inside Whipstaff Manor is incredible too, with its swirly floor, infinity billion rooms, enormous kitchen, and secret resurrection lab. It really has a lot going for it.

But let’s take it a bit further and go inside the story this house is holding. When Kat befriends Casper, I was so envious. I didn’t even care that he was dead. He was lonely. And he understood her. Hashtag, friendship goals.

My knee-jerk approach to the mansion from Edward Scissorhands is much like my feelings about the castle from Beauty and the Beast: How in the ever-loving hell did all these townie jerks in their little cookie-cutter tract-home village manage to miss a huge, dark, looming castle at the top of a hill?

Especially when the Edward Mansion is so incredible and the rest of the town looks like Stevenson Ranch, California?

But back to the inside of the house.

Remember the cookie machine? Exactly- tell me the Edward Mansion wasn’t one of the best houses that came out of the 90s.

Remember also, after the end of the movie when Edward is chased back up to his house and he has the stand-off with Kimberly’s boyfriend? After that, he even made it snow. He defied nature and from the confines of his castle, he made snow happen. I can’t even make frost on my windshield happen here in Southern California. See what I’m saying?

That house is a miracle.

I’ve seen the internet talking about the McAllister house from Home Alone since like, at least before the internet happened. And truth be told, it’s a lovely home. Well, more than lovely. It boarders on palatial, and the fact that so many people and cheese pizzas crammed themselves in there is super impressive. Almost as impressive as a ten-year-old committing near homicide within the confines of his Christmas decorated twinkling light fortress.

However, I think there are even greater lessons to be taken away from the sequel, Home Alone 2. Truth be told, I learned a lot from this movie, things that may have never been exposed to me otherwise. Such as…learning what a credit card machine looked like. Learning that yes, I needed a Talk Boy more than I needed blood in my veins. I also learned a new word. Renovating.

In the film, you see, Kevin’s parents are talking, wonder if their son has managed to keep safe while lost in New York City. The father, Peter wonders if his son would be smart enough to call his brother, who apparently owns a home in the city. His mother then says “I thought they were renovating!”

Kevin finds his uncle’s address and makes his way to the house. And I have to say, my stupid Los Angeles suburban mind was blown upon sight. I didn’t even know what I was looking at the first time I saw the Manhattan home with a tube sticking out of it. But once inside, (trying to murder Hanukkah-celebrating burglars or not) I wanted to play inside that house so badly.

Think about it! That house has a HOLE that goes down THREE STORIES. Can you imagine yourself as a kid and all the amazing adventures you could devise with that setting? But going back to the film’s climax, which is Kevin trying to murder the same two dudes from the last movie, this gutted shell is the perfect place to end lives.

The house, while not only in severe renovation but also abandoned, still has enough power surging through it to turn Marv into a skeleton! There’s also that cool wall of paint that puts Home Depot to shame. I’m saying, this house has everything in it to have some kind of Peter-Pan-paint-splattering-flour-pounding-jungle war.

Like seriously, I’m planning my next birthday party at the Home Alone 2 house as we speak.

Oh man, talk about relationship goals. The Addams Family and their close-knit loving loyalty is the baseline ingredient that turns this mind-blowing mansion into a true estate. The Addams’ Family mansion not only has a butler, a cooking grandma, and a secret vault, but there’s a cemetery right on site!

And with games like “Wake the Dead”, Gomez’s train set, and the Super-Fun-Happy-Slide down to aforementioned secret Scrooge McDuck vault, the games at the Addams’ house never end! Did your house have an electric chair or crazy-ass flushing tubes that spit you outside if you pull the wrong vault chord?

And who didn’t load up with knives and try to dance the Mamushka with their siblings after this movie came out? That ballroom got some serious usage between the Mamushka and the Halloween Dance Party.

This house seriously has so much going for it. Every day in the Addams’ house seems like an adventure. Plus, they have the coolest pet in the universe.

1) The Parrish House from Jumanji

Jumanji was another film that came out in 1995 and hit every single tropey nail on the “people depending on each other” head.

Judy and Peter, move into a house and this incredible game was just up in the attic waiting for them. They didn’t even have to do anything or go anywhere and that game just showed up, ready to make some adventures happen. Did that kind of amazing stuff happen to me when I ditched school? No- all that happened was another episode of Jenny Jones where some goth kid got their makeup scraped off for the thousandth time.

The adventures for Judy and Peter truly begin once they roll the dice and free Robin Williams from his jungle chamber. Robin Williams, are you kidding me? That was every kid in the 90s freaking dream!

Getting to spend an afternoon with Robin William while you run from stampedes, avoid drowning from monsoons, and watch your entire house split in half from an earthquake that puts the 1994 Northridge quake (the one that made freeways collapse) to shame?

I loved the imagery of Robin Williams sinking into the floor, like quicksand. Something about it was cool to me as a kid. Even more, I loved when Bonnie Hunt goes in after him, but then the floor re-solidifies, rendering them in this pose. So romantic.

I’m telling you. Houses in 90s movies were the best.

Did we miss your favorite 90s house? And no, Beetlejuice was 80s! Tell us about it in the comments and get the conversation going!

You can find Loryn pitching a tent, decorating it, and moving into it on Twitter. She also has an author page and personal blog. Her debut novel My Starlight, a young adult tale about sexuality, nerd fandom, and first loves will be released August 3rd, 2018 by Affinity Rainbow Publications.

An Open Letter to Playstation (From a Disabled Gamer)