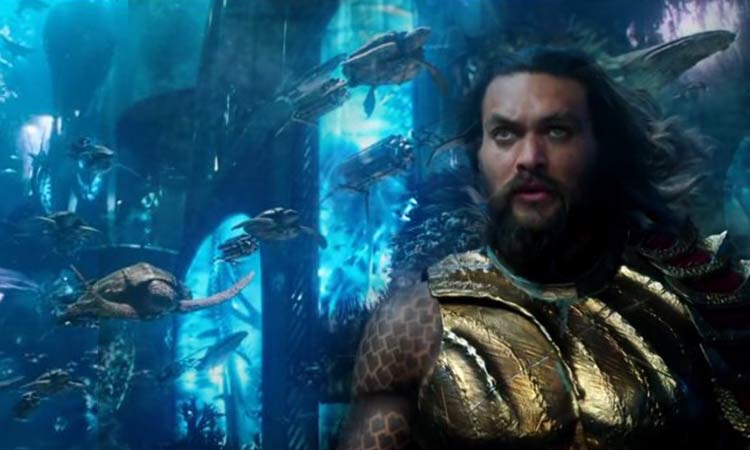 Finally… the Aquaman trailer has arrived! DC again reigns supreme at Comic-Con delivering as promised, a preview packed with oceanic battles, badass tattoos, and the hope of critical acclaim.

You want to talk about cutting it close, the movie comes out in like four months and we are finally getting our first taste now? Look, I understand. Warner Brothers is still coming off the Justice League hangover, James Wan took some extra time to make the preview great, they need to make a semi-literal splash in San Diego, whatever. There’s several potential reasons for the delay but it’s here, we watched it, so let’s discuss it.

I will start off by saying, yes the wait was worth it however, I’m not blown away, and that’s a good thing. How is that a good thing? Because I seriously stand by my earlier statement; the Comic-Con Batman v Superman trailer is one of the best ever made. In addition, the first Suicide Squad trailer, remember when the play Bohemian Rhapsody? Another amazing piece of marketing. Then we go to the theater only to find an incredible state of disappointment. My initial reaction to Aquaman was more on the same wavelength as the Wonder Woman footage we saw in July of 2016. Very impressed, yet not something I right away texted my friends about. If history repeats itself, December could bring a rare gift to the DCEU, positive reviews.

Believe me, not being blown away isn’t the worst thing. So why wasn’t I? Honestly, my lack of mega enthusiasm doesn’t stem from the content of the trailer but from my own ignorance of expectations. It’s the first on screen adaptation we’ve seen since James Cameron’s Entourage adaptation and I had no idea what we were going to get. When this happens to me, I usually have to rewatch until the sun comes up. I don’t have any negative thoughts, just unfinished mental inquiries that will wait a little while longer to be satisfied.

Even after god knows how many superhero films enter our beautiful world, somehow they can still be fresh. By going underwater we’re taking an approach never before seen on the big screen. I’ll bet my 1970’s London Calling pressing the plot resembles Black Panther minus a magical flower but then again, most of these movies follow a formula and you can’t hate on classic storytelling dynamics. Just as long as it’s different. When audiences travel to landscapes that challenge the typical traditions of filmmaking, we feel a certain attraction to the product. It pulls us in. As long as the characters aren’t awful, you practically struck oil, or a more modern, environmentally friendly analogy.

We got Jason Momoa, returning to the DCEU as our favorite fish talker, Arthur Curry… the Aquaman. While I thought he came off slightly “bro-ey” in Justice League, his off putting personality could be supplemented with a touch of development. What I’m talking about is knowing where this man came from. He’s like able but let’s be realistic, the frat douche thing is very easy to hate. When it’s dropped on you with no character history as we saw before, there’s minimal time to understand him. Meera (Amber Heard) looks to play more of a role than I had anticipated. We’re going to see her on land, underwater, even jumping out of a plane. Again, not much in Justice League, however the foundation has been laid. A sharp, intelligent, sick AF ocean badass whose wit is as fiery as her attention grabbing hairdo. Definitely the yin to Arthur’s yang. The only woman who will put him in his place. When dealing with a large, commanding figure like Momoa, a smaller, ardent counterpart makes the perfect match! Patrick Wilson is Orm, brother to Arthur, and main villain in the film. Black Manta (Yaha Abdul-Mateen II) I’m assuming will be the secondary bad guy. If I were to guess where the story’s headed… I’d say war. Similar to Black Panther, Kingdoms Of Atlantis, humans above water, anyone with an axe to grind, battling it out in what could be the biggest visual spectacle of 2018. Different tribes riding dolphins, sea horses, even a monster alligator. While massive fight scenes are nothing new to the superhero genre, Aquaman’s below the sea setting gives an opportunity for James Wan to really have some fun and show off exactly how unique the project actually is amongst all we’ve seen in the past.

Did someone say the visuals? How amazing were the visuals? Seriously the best DC has offered so far. Bright colors, intricate designs, like every detail must have taken hours to get right. The initial shot of Atlantis had this Ego’s Planet from Guardians 2 vibe going on leaving the moment a George Harrison song shy of perfection.

A while back I saw a meme that said something along the lines of “Aquaman’s five point trident is a metaphor for everything wrong with the DCEU”. I’m paraphrasing of course but those words couldn’t be more true and as the studio looks to move forward from the Zack Snyder era, the trident could serve as a symbol of hope for the universe. Here’s how, in the trailer, Arthur carries the five pointed weapon, Orm carries a normal, just like the comics, three pointed trident. Which I’d bet is something only the King can bear. Also in the trailer, they engage in a little bit of the fisticuffs.

After the winner is declared, I’m sure the trident will go to them. If Arthur is the victor, at the end of the movie I’m sure we’ll see him swimming proudly in a bright gold suit holding a spear that isn’t a metaphor for how the studio’s over stylization of simple comic archetypes completely robbed the audience from their visual connections to the source material. But that’s another topic for another day.

As I said before, I’m not blown away by the trailer yet I still think James Wan is the man and the film will be pretty good. Will it be a game changer? We’ll see…

All I know is I need my DC movie fix because the Justice League on HBO is not doing it for me.

Is Aquaman going to to amazing? Let Nerdbot know in the comments!!

Fads From the Past (That Got Banned at Schools)