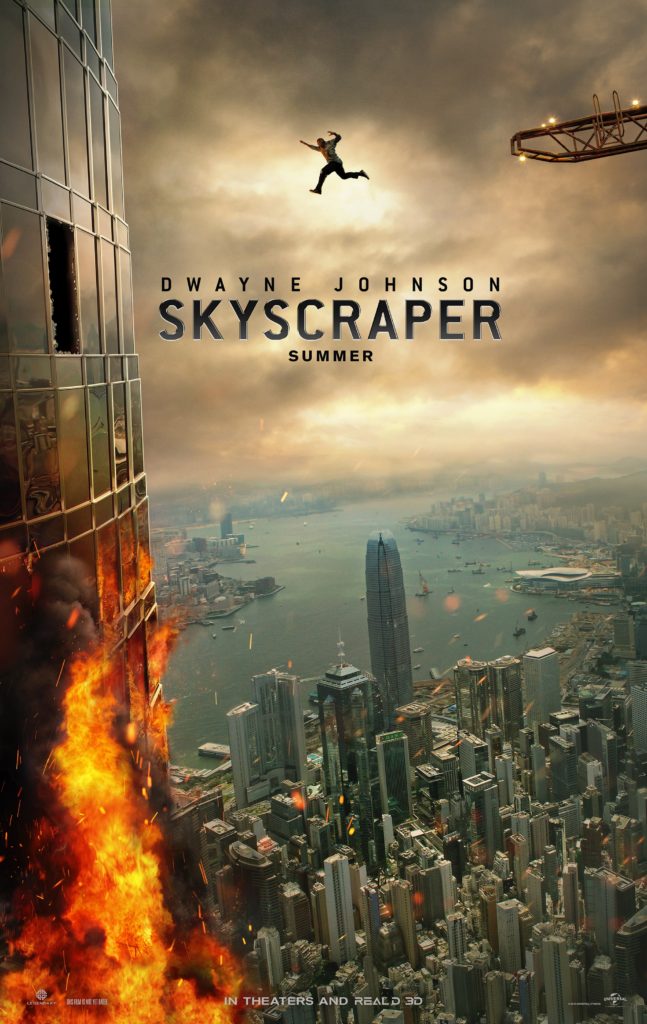 I knew going into this movie that it wasn’t exactly Oscar bait. This is the second time in the last few years that Dwayne “The Rock” Johnson has had to fight an inanimate object. Humans are no longer any match for him. Johnson is as a performer, a goofy, lovable ham, going back to his days as an eyebrow raising wrestler. I figured this movie would be him saving the pretty lady whilst cracking wise.

This movie didn’t get the memo. It doesn’t know what it wants to be. Or rather, it specifically knew what it wanted to be but didn’t get it right. It’s Jurassic Park without the dinosaurs, or the sexy, shirtless Goldblum, or the fun. More so, its Die Hard ticking off the list of the skyscraper setting, the family in the cross fire, and the Eastern European villains, but without charm of Bruce Willis’ John McClane or the greatness of Alan Rickman’s Hans Gruber.

What struck me immediately was how silent the audience was. When a “joke” hit, you could hear a pin drop. It was almost embarrassing, like watching a standup comedian bomb. Even heckling would have been preferable to the patient, almost pitying silence of the audience. Occasionally a man behind me would give a sympathy cough and fidget with his keys. The biggest laugh the film got was at the poor quality of a student produced Coca Cola/Regal propaganda short proceeding the film. It was as if a group of retired civics professors expecting to watch a documentary on post WWII economics had found themselves in the wrong theater and were too tired to protest. The frat bros in the row beside me sat as though in a Sunday school lesson.

Yes, this movie was so boring that I began to review the audience.

These were Rock fans, they specifically picked out this movie and paid good money to see it on opening night, why so listless? Then it occurred to me that a Rock fan does not want a bad action film, they want camp. They want over the top, outrageous camp. They want to cheer on a giant gorilla and boo geology. It doesn’t have to make sense, hell, the less sense made the better. They want fun. I realized, as I counted how many times the chick in front of me left to go to the bathroom, that’s what I had wanted too.

The Rock was wounded in the line of duty (FBI hostage negotiation) and lost a leg. You would think that comes up more often than it does, but oddly it doesn’t. Ten years later, he, uh, he researches fire safety in buildings he’s never visited. Whatever, sometimes a complete shift in careers is a good thing. He’s in Beijing to give the final okay on the world’s biggest skyscraper ever and make sure it’s safe for residential use.  He’s also there to make sure this movie will do well overseas if it doesn’t in the U.S. His best friend is Pablo Schreiber of Orange is the New Black Porn-Stache fame, just so you don’t spend the entire movie trying to figure it out. There is sabotage afoot, for reasons that end up so boneheaded and over-complicated that if you’re like me, you’ll spend hours ranting about it afterward, until the landlord shows up and asks you to keep it down.

Whenever a ship is unsinkable, or the park’s security is infallible, or a humongous hi-tech skyscraper is fireproof, you know that place is going down. The villains attempt to lure the Rock’s family out of the building but kids will be kids and mess up evil plans. Seriously though, the kids, and Neve Campbell as Johnson’s wife are probably the best part. Plot contrivances, sure, but Campbell plays the role in a calm, competent way that makes you wonder why she doesn’t get more parts. She gives the kids tasks to do to keep them from panicking and make them helpful and the kids listen and don’t go screaming and tearing the other way towards the fire.

Johnson has to get back into the world’s tallest building to save his family, while the Beijing police department decides to let the mother burn and focus all their attention on hunting him down and shooting him. Seriously, I saw zero fire trucks and like three helicopters trying to shoot him off a building.  Meanwhile, the entire citizenry of Beijing is watching the drama unfold on a mega screen. At one point there is a close up shot of his face as he dangles thousands of feet in the air. At this point my husband, who worked as a news photographer, leaned over to me a whispered indignantly “Who is filming this?” The photographer would have to have been in a helicopter, ten feet away from Johnson’s face, shining a light on him to get a shot such as this.

For all its high wire acts, it lacks intensity. The Rock’s charm is underused and he comes off as tired. Nary an eyebrow is raised. The sincerity of the performances by the kids and Campbell hurt somehow, rather than help. When he does make a bad duct tape joke to no one, you think to yourself, “Move it along jackass, who are you talking to? Your kids are trapped in a burning building!”. The police’s confusing decision to not help the people in the building is annoying. At one point an actor is startled by the flash of a prop gun and shoots with both eyes closed. At one point my mind wandered and I started wondering if Carl’s Jr. still made chicken stars. It had nothing to do with the film, I was just suddenly craving them. I haven’t had those in twenty years.

When the film ended, the audience got up and left like the theater itself was on fire. I think a guy pushed me. They lights were still dim, so I wondered to my husband if we should stay and see if there was an after credits scene. “God no!” he replied as he hustled me out of the theater. “But I forgot my purse!” “It’s all replaceable, let’s get out of here!”

Did you like Skyscraper? Do you know if Carl’s Jr. still sells Chicken Stars? Is it weird for an adult to eat those? Let Nerdbot know in the comments!